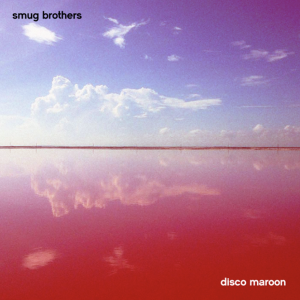 Who: Smug Brothers, a Dayton-based quartet, return with their 10th release.
Sound: Disco Maroon sees the Smug Brothers carry on their tradition of delivering ultra-catchy rock to their listeners.
TFN Final Take: Even though they are 10 releases into their discography, the Smug Brothers continue to grow and develop their sound on Disco Maroon. Some tracks still have that trademark Smug Brothers up-tempo, jangle rock sound (“Concentration Lawns”, “My Little Crowd Pleaser”, “Hang Up” and “Amplifying Sigh”), but the rest of the album sees Kyle Melton expanding his song writing horizons.
Album opener, “It’s Official Everywhere I Go”, is the most post-punk they have been since Fortune Rumors’ “Wax Double”. Smug Brothers also demonstrate a knack for some rather desolate and somber Americana-style rock on “Observatory Lanterns”, “Skin of The Most Perfect Cheetah”, and “Wish It Was June”.
Kyle (vocals/guitar/songs), Brian Baker (guitar), Larry Evans (bass) and ex-Guided by Voices drummer, Don Thrasher, are tighter than ever. They effortlessly create catchy song after song, album after album, not unlike another Dayton-based band, Guided by Voices.
Smug Brothers often draw comparisons to Guided by Voices. Their earlier LPs and EPs could have been long-lost Pollard albums. Smug Brothers’ sound has separated itself from the Dayton legends over the years, but there are a few tracks on Disco Maroon that are so “GBV-ish” that you will have to double check that you are still listening to Disco Maroon. On “A Sea by Jupiter” Melton’s vocals emulate Robert Pollard and the 4-track recording brings you back to GBV’s lo-fi era. It is one of the best tracks on the album.
Disco Maroon is another fine accomplishment for the Smug Brothers. By adding different influences and genres into the song writing, they have made an interesting and entertaining album that is more diverse than anything they have done before.

Bill Mallonee & The Big Sky Ramblers: The Rags Of Absence