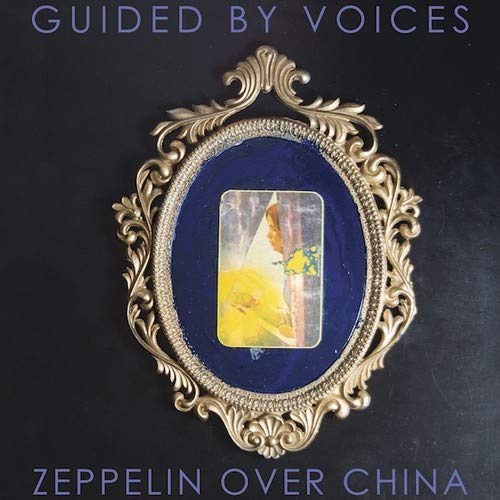 Fire Note Says: Guided By Voices’ latest effort is a 32 song, double album behemoth. But is it any good?
Album Review: After dedicating all of last year to the release and support of one (just one) album, the late-career masterpiece Space Gun, Robert Pollard and his gang plan on upping the ante for 2019 with three LP’s and a slew of EP’s on tap. This is standard operating procedure for Pollard though. Bob still writes a dozen songs before lunch. Now fully comfortable with each other after four albums and extensive touring, this version of the band is muscular and hard-rocking but without forsaking the weirdness that has always been a big part of Pollard’s sonic palette. Once again, this lineup (which includes Doug Gillard, Kevin March, Mark Shue and Bobby Bare, Jr.) attacks each song like it’s the last thing they’ll ever play. The subtle production of Travis Harrison breathes life into songs that already bristle with energy. Unlike its mighty predecessor, Zeppelin has an expansiveness of spirit – similar to (gasp) The White Album. Each of its four sides represents a different side of Guided By Voices but still functions quite well as a unified whole.
Side One is the most direct and archetypal. It starts with 69 seconds of brilliance called “Good Morning Sir.” It’s the perfect warmup for the marathon ahead. The first huge hook arrives shortly thereafter with “Carapace.” There’s krautrock feel as the band locks into the groove and refuses to let go. The sludge-filled “Holy Rhythm” closes the side with the most unlikely earworm imaginable. Side Two is the “acoustic” part as many of the songs here are stripped down and slightly folksy. But don’t get confused: two of the best songs on the album reside here and they both slay. “The Rally Boys” shows GbV can rock out even with strings backing them up while “You Own The Night” is yet another one of those perfect songs that Pollard can still crank out with startling regularity. It’s strange arrangement adds enormous power to the final chorus, a chorus I’ve been singing aloud now for days.
We might as well call Side Three the Prog side as three of the songs actually hit the three minute mark. The slow burning “Nice About You” has a decidedly Chairs Missing era Wire vibe that I enjoy. “Einstein’s Angel” boasts a lovely melody, interesting chord changes and easily could have been a lost track from Choreographed Man Of War. Later we have Pollard reflect on his hearing loss (which he also addressed on the first Cash Rivers LP) on the aptly-titled “The Hearing Department.” Next up is my personal favorite tune from the set: “Questions Of The Test” – referencing Pollard’s previous job as a fourth grade school teacher, perhaps. With his affected vocals in full effect, the jangling guitars eventually give way to an exuberant explosion of rock ‘n roll, baby. The final side is harder to define but no less enjoyable. Highlights include “Cold Cold Hands” which shows Pollard can still hit the high notes and the gorgeous “We Can Make Music” which borrows some of Space Gun’s orchestrational zeal. “Vertiginous Raft” closes things out quite majestically and, once done, begs the listener for another round – exactly what it should do! One thing that most fans can agree about: Pollard is a master at sequencing.
It truly is astounding that Guided By Voices are still at the top of their game. There is no logical explanation. And unlike many of their 90’s contemporaries who likewise reformed, GbV is relevant and releasing material every bit as good as their heyday. Hell, maybe this is their heyday. There is no doubt that this is the most talented group Pollard has ever put together. They seem to be enjoying this and also seem to know how good they are. I’m okay with that. They have earned it. Where, then, to place this monster within the panoply of Pollard releases? It’s heft challenges like August By Cake. It’s sheen and overall quirkiness though align it more closely to Space Gun. And for this reviewer at least that is a very good thing.
Key Tracks: “Carapace” / “The Rally Boys” / “Questions Of The Test”
Artists With Similar Fire: Teenage Fan Club / Smog / Eric’s Trip
Guided By Voices Website
Guided By Voices Facebook
Rockathon Records
– Reviewed by Scot Lade