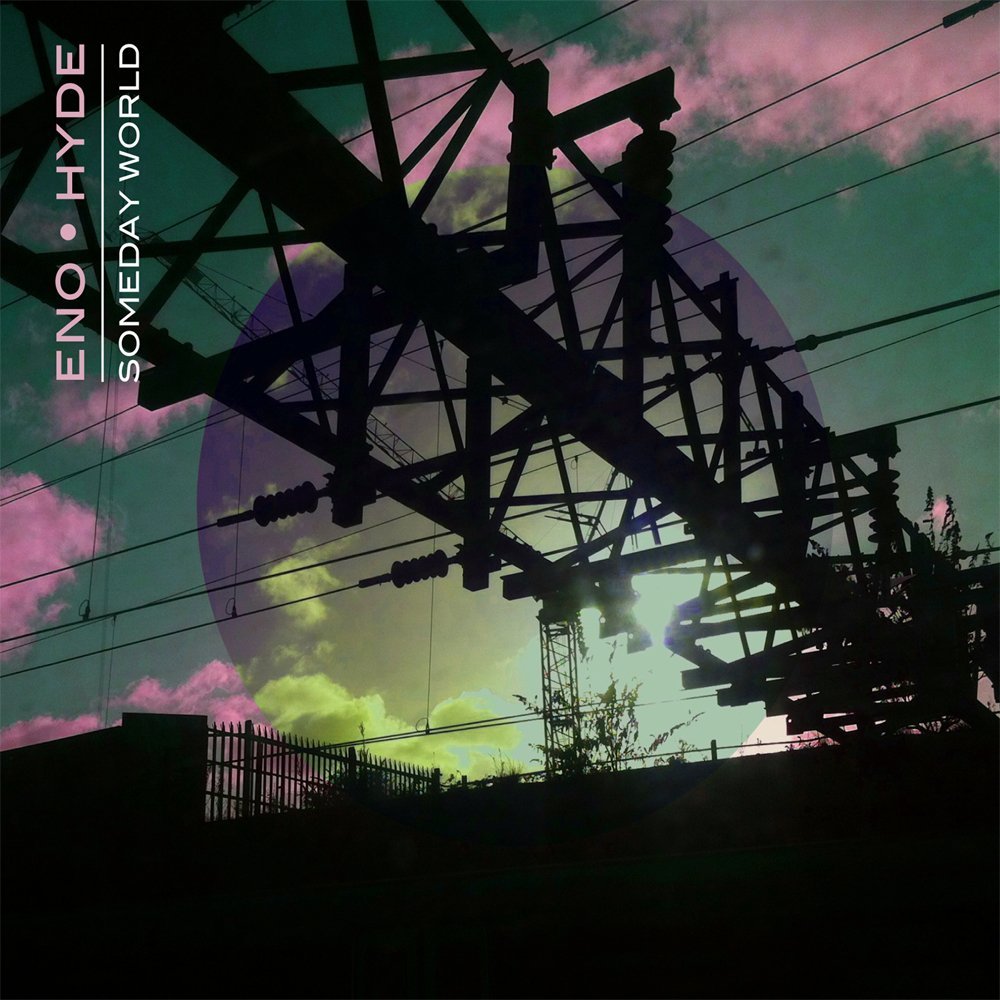 Fire Note Says: Someday World’s slick electro-pop contrasts nicely with High Life’s hypnotic, groove-heavy jams.
Album Review: These days Brian Eno is probably most well-known as that guy who invented ambient music (even though there are certainly others who deserve such an accolade—Eno did make it more mainstream, though). But back in the mid-70s, Eno was making odd, idiosyncratic art-rock albums like Here Come The Warm Jets, Taking Tiger Mountain (By Strategy), and most famously Another Green World (not to mention Before and After Science), and while his singing voice isn’t exactly what one would call “pretty,” it fit the music perfectly. But after the late 70s, Eno pretty much stopped putting vocals on his albums—he’s occasionally done individual tracks with vocals here and there, but other than the just-OK 2005 effort Another Day On Earth, his albums have been largely instrumental works with big long ambient pieces. However, on his two new collaborative albums with Underworld’s Karl Hyde, Someday World and High Life, Eno has dusted off the microphones and started singing again—at least on some of the tracks (he and Hyde share vocal duties on these albums more or less equally). And while these two albums are surprisingly different from one another, each contains some of Eno’s most accessible (and, dare I say, danceable) music in decades.
Someday World is definitely the more “pop” album of this pair, full of electronic confections that generally run in the four- to five-minute range. These aren’t necessarily “pop songs” in the conventional sense—after all, Eno’s never been a very conventional chap. But they do contain verses and choruses, are at least somewhat catchy, and aren’t abrasive in any way—that is, unless you have an aversion to 80s-style synth horns and drum machines. While on the surface a few of Someday World’s tracks may sound a bit dated, once you get used to Eno and Hyde’s sonic palette they can be a lot of fun. What becomes clear while listening (especially on headphones) is that the pair aren’t tied any one genre or era, but instead borrow and steal liberally from all sorts of places, creating a kaleidoscopic array of sounds (there are also live drums, guitars, keys, real brass instruments, hand percussion, and Eno’s array of all sorts of weird “prepared” instruments—Passive guitars! Tolkein synth! Tapestry voice slices! Jerry Lee piano!) to back their obtuse—but interesting—lyrics. In other words, this is not just another workmanlike album of subtle soundscapes: Eno and Hyde are having fun, and while they hope you do too, they don’t care if you dislike some of their cheesy synth noises. 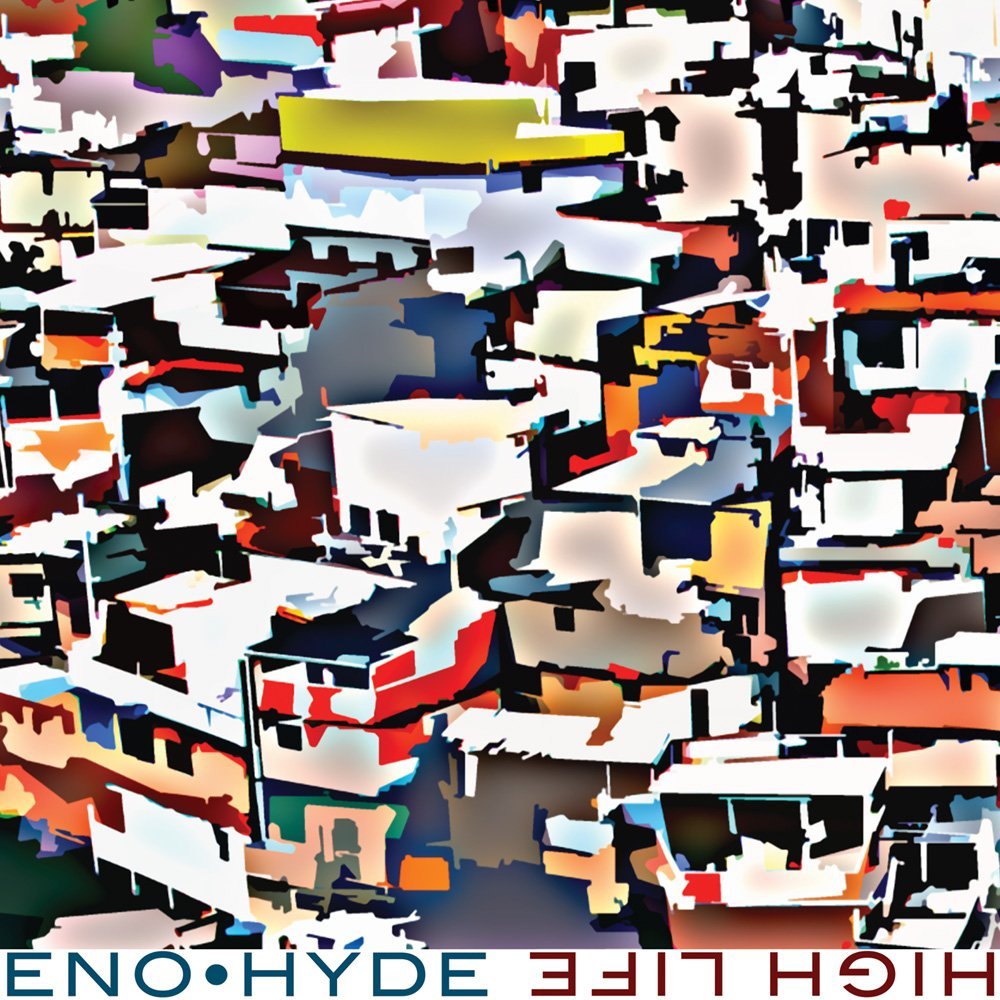 They had so much fun, in fact, that they decided to make another album right away. For High Life, things do get a bit more stretched-out and spacey, though this is still not an ambient album by any means. It’s comparable to what Eno was trying out on Another Green World and side two of Before and After Science: deconstructing “pop music” in all its forms by breaking it down into its most basic elements and then filtering that essence through interesting audio textures. But the hypnotic, complex grooves most recall Eno’s groundbreaking 1981 collaboration with Talking Heads’ David Byrne, My Life in the Bush of Ghosts, an album that combined what is now called “world music” with rock, pop, and experiments with sound samples. High Life is surprisingly guitar heavy, and while it lacks the diversity of Someday World, it more than makes up for it with its slow-building crescendos and more focused approach to song construction. These tracks are basically the result of live-in-the-studio jams with minimal overdubs, and the result is an album that is more consistent (thanks to longer average track times) and more spontaneously human-sounding—these are real people playing real instruments, creating and responding to each other in real time, and while there are fewer vocals here than on Someday World, when the music’s this good you (almost) don’t miss them.
While each of these albums has their strengths and weaknesses, they’re really two sides of the same coin. Brian Eno’s music has always been cerebral, but these days it seems he needs musical collaborators to get him to make music that’s both heady and fun. Karl Hyde seems to have been able to kick-start the wacky parts of Eno’s brain, and I for one hope that results in more records like these.
Key Tracks:
Someday World: “To Us All” / “Strip It Down”
High Life: “DBF” / “Time To Waste It”
Artists With Similar Fire: Talking Heads / Roxy Music / Radiohead

Sharon Van Etten: Are We There [Album Review]