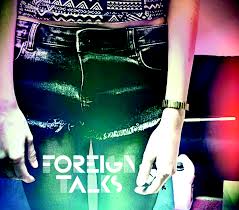 Fire Note Says: Foreign Talks shows loads of potential on their debut.
Album Review: After generating significant online buzz, Portland-based Foreign Talks’s self-titled debut album has arrived, and while it will no doubt be enthusiastically accepted by those who are into the band’s musical aesthetic (more on that below), it may inspire the exact opposite reaction in most Fire Note readers. Not to generalize, but if you’re reading this review, chances are you aren’t into “mainstream” music as much as the typical radio listener. And the mainstream is exactly where Foreign Talks is aiming; while that isn’t a bad thing in and of itself, it does result in music that targets mass appeal, something many readers here may find downright unpalatable.
Foreign Talks craft poppy, radio-friendly tunes that mix elements of rock, pop, and rap. The actual music itself is actually pretty appealing: the band plays tightly (and they DO actually play their instruments), while the arrangements give the album a friendly, laid-back vibe. It’s pretty impressive for a group of teenagers, and sounds like a band that’s been together much longer than two years or so. Some of the tunes may be a bit predictable, but this is a debut album, and the songwriting is strong enough to make it clear why this band received so much pre-album buzz.

So what’s the problem? Well it’s the vocals and—more specifically—the lyrics. With many bands you can ignore the lyrics, even if they’re awful at times; after all, if the music is great, who cares about the lyrics? The trouble with Foreign Talks is that the half-sung, half-rapped lyrics are given such prominence in the mix and can be so repetitive that you can’t help but pay attention to them. Some aren’t too terrible (“The Spell” and “Stay the Same” are even pretty good), but way too many sound like what they are: the product of teenagers (and not in a good way), full of “hip” slang and clichés. Take “Mama,” for instance: “Mac and cheese on a Tuesday night / We’re just trying to fight to keep on that light… // Daddy I’m growing tall / and I’m sorry I don’t play your precious football…”. And that’s just the beginning. Suffice it to say, lyrics aren’t these guys’s strong suit, and when they’re so “in your face,” they tend to ruin songs pretty quickly.
So while Foreign Talks shows plenty of talent and potential, the execution on this album is somewhat of a flop. You get the feeling while listening that after another album or two, with some touring and experience under their belt, they could put out a great album that mixes all manner of genres to create something pretty cool. And while this album will no doubt prove popular with their target audience/peers (read: teenagers), more discerning listeners will probably want to skip it and check back in a few years.
Key Tracks: “NW Wonka”, “The Spell”, “Stay the Same”
Artists With Similar Fire: Gym Class Heroes / Bombay Bicycle Club / Mat Kearney
Foreign Talks Website
Foreign Talks Facebook
Expunged Records
-Reviewed by Simon Workman