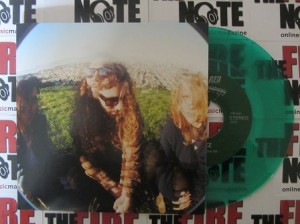 Fuzz is a project consisting of San Francisco’s favorite son Ty Segall (The Traditional Fools, Ty Segall Band) on drums and vocals, Charles Moonheart (Ty Segall Band, Charlie and The Moonhearts, Culture Kids) on guitar and rounding things out there is ex-Moonheart Roland Cosio on bass. This is the second 7-inch the group has released, their first being pressed on Trouble In Mind Records. From these heralds of fuzz, you get two burning embers of riff based rapture.
The A-Side, “Sleigh Ride”, explodes with a riff that mimics the psyched-out proto-punk/heavier groups of the 60’s down to a T-think Blue Cheer or MC-5. 30 seconds into the track really picks up speed and converts into a power chord gallop. A Sabbath stunner on speed it has a fair amount of trills thrown in and that’s all in one track. The B-Side “You Won’t See Me” gives the stoney sludge a run for its money. It’s a great mix of hard and soft playing chewy guitar and sunshine pop cards at the same time. The real finale happens to be Moonheart’s Hendrix acid infused guitar freak out. This 7-inch seals the deal, I’m officially excited for the Fuzz full length that’s supposed to be out later this year. These guys take everything from elements of sludge, stoner, and psych to punk, metal, and garage to cultivate a sound all their own.
The standard jacket presents a kaleidoscopic view of all three members on a grassy hill. But the cool feature about this 45rpm wax is its green coloring. In The Red is usually very coy about its pressing numbers. From what I understand twenty 45s where placed in a metal sleeve and given to members of Fuzz as well 16 friends of In The Red Records. We don’t have official numbers from In The Red about pressing numbers but I suspect that the sold out green was limited to either 200 or 300. Sadly no digital download with this one, but if you have the wax just be glad because it’s sure an experience.
In The Red Records
-Feature by Christopher Tahy