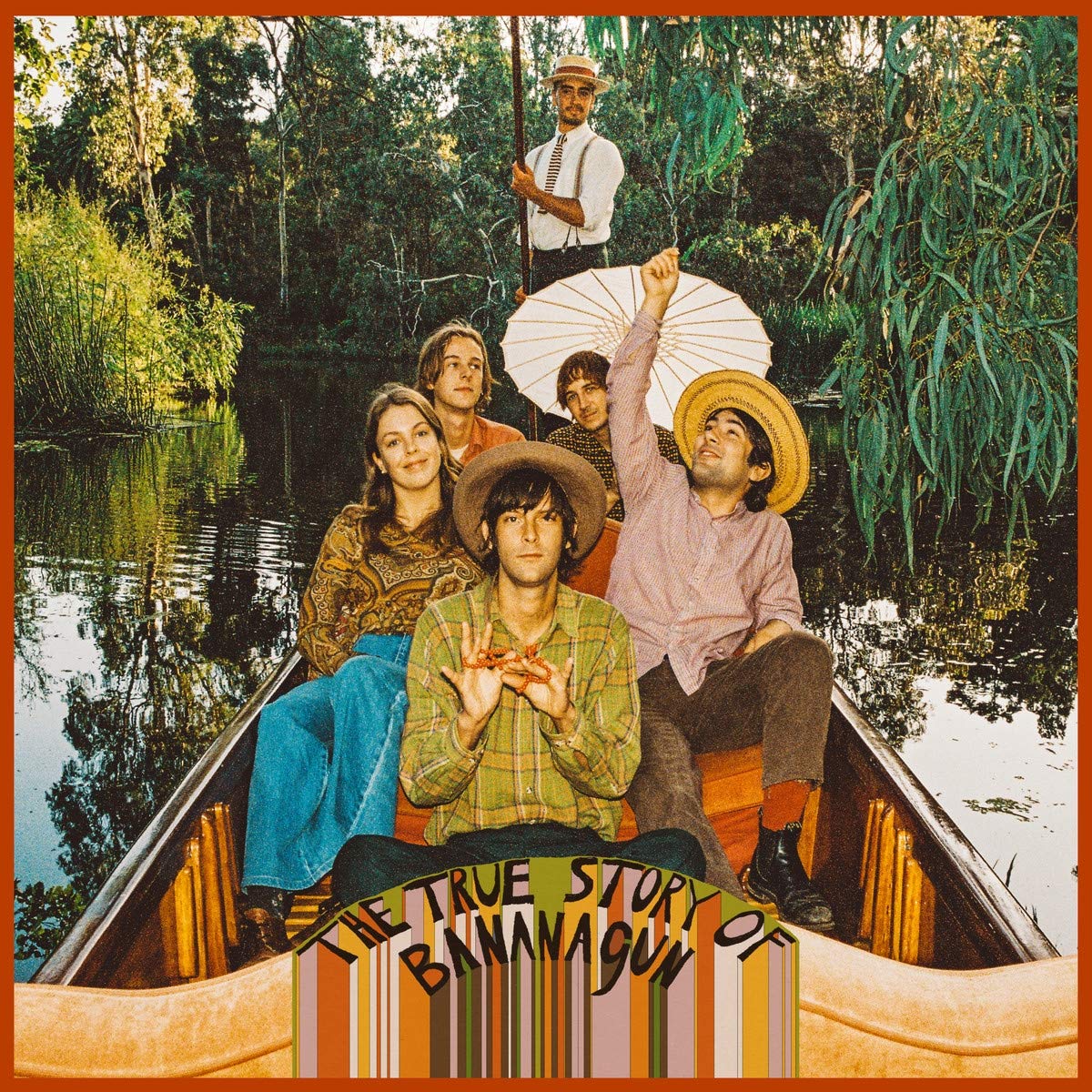 When you name your band “Bananagun,” you’re setting up certain expectations for the listener. At the very least, they’re going to anticipate some eclectic music, possibly with a tropical vibe, and an oddball sense of humor. Hailing from Melbourne, Australia, the band mostly delivers on those promises with their debut album The True Story of Bananagun, which blends influences from several far-flung corners of the globe across eleven whimsical tracks.

Bananagun draw on multiple genres to create their dense, groove-heavy brand of neo-psych pop. The band’s strong rhythm section draws attention to itself on almost every track, borrowing funky percussion arrangements from bossa nova and afrobeat in equal measure. Fela Kuti is an obvious touchstone, but the band’s fuzzed-out, layered sound is even more reminiscent of Brazilian psych and Tropicália pioneers Os Mutantes. Tracks like “People Talk Too Much” and opener “Bang Go The Bongos” set up hypnotic grooves and then jam out on them, using repetitive vocal motifs and effects-laden guitar solos to enhance their trance-inducing vibe. The band has a knack for packing so much into a song that a three-minute track feels more like six or seven, which can make things a slog if you aren’t in the right mood. If you can get into the groove, though, the opposite effect happens, leaving you wishing the band would keep on jamming indefinitely.

Things get a bit more diverse towards the middle of the album. The Afro/Latin rhythms settle into something a bit more conventional while the songwriting and arrangements diverge from the first few tracks. Songs like “Freak Machine” and “Out Of Reach” go for catchy hooks while emphasizing sax and trumpet, with the latter featuring some jazz-rock touches reminiscent of early Chicago. “Perfect Stranger,” one of the album’s highlights, features acoustic guitar strums and flutes prominently in the mix, and has the kind of laid-back vibe that brings to mind early 70s Laurel Canyon troubadours. Things get a little more psychedelic with the one-two punch of “Mushroom Bomb” and “Modern Day Problems,” both of which feature some acid rock riffage and a slightly more somber tone. While still catchy, these tracks explore similar trippy territory to Embryonic-era Flaming Lips or the band’s fellow Aussies King Gizzard and the Lizard Wizard.

The True Story of Bananagun is a promising debut that shows the band isn’t afraid to blend touches from a diverse set of genres, often in the same song. The groove-based approach can get repetitive at times, but if you’re in the right mood for it the band can jam out with the best of them. It’ll be interesting to see where they go from here, but The True Story should keep listeners entertained until the sequel.