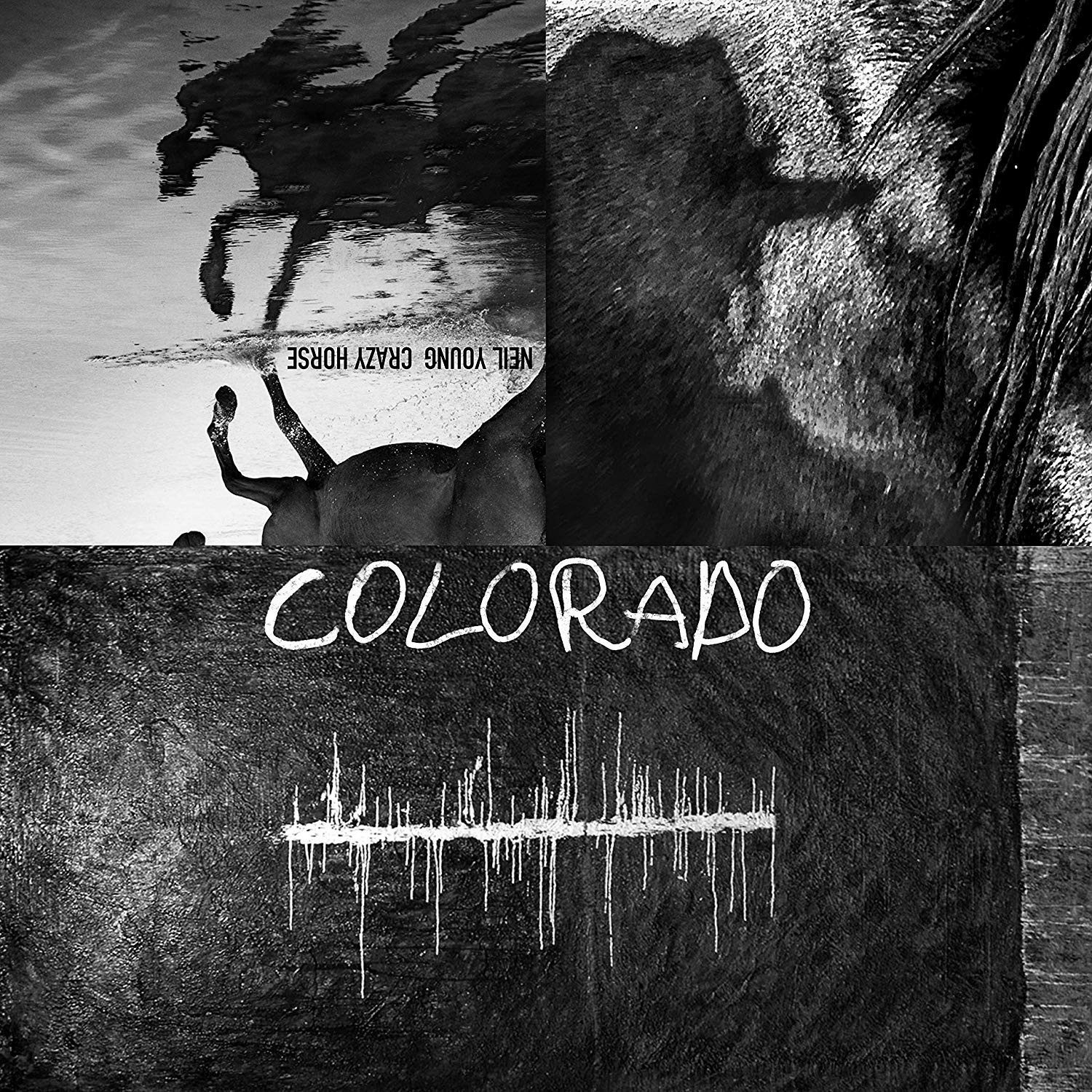 Fire Note Says: Neil Young regroups with Crazy Horse and Nils Lofgren, for an album that’s a mix of militant guitar activism on behalf of Mother Nature, and some nostalgia for an earlier time.
Album Review: “You might say I’m an old white guy” Neil Young confesses in the 13 minute song “She Showed Me Love.” It’s the one song longer than 6 minutes on his new album with his band of 50 years, Crazy Horse, recorded in and titled for Young’s current home state, Colorado, his 40th studio release (not counting archival, live and collaborative works). At 73, not-so-Young may be feeling sentimental for the “Olden Days,” but as an artist he’s focused on the future of the planet as we struggle to face the challenge of climate change here in the present. Confronted with the harsh reality of it, he can be curmudgeonly willing to “Shut It Down,” but he’s also able to affirm “young people fighting to save Mother Nature” and find some hope, no doubt because “She Showed Me Love.”
Of course, Young’s relationship with Crazy Horse goes back to the beginning of his career, playing on his second album, 1969’s “Everybody Knows This Is Nowhere.” Billy Talbot on bass and Ralph Molina on drums have been the heart and soul of Crazy Horse for the duration of that 50 years, while original guitarist Dan Whitten, who died tragically in 1972 and was the inspiration for “Tonight’s the Night,” was replaced by Frank Sampedro, who played with Crazy Horse through Young’s 2012 release, “Psychedelic Pill,” and the two years of touring that followed. Sampedro has now retired to Hawaii.
Nils Lofgren has stepped up, at Young’s request to complete Crazy Horse, reprising his role on the 1970 album, “After the Gold Rush,” and again on “Tonight’s the Night” in 1975. Lofgren, of course, had a prolific solo career, sat in on a couple of Young’s albums in the 80’s, and in 1984 he replaced Stephen Van Zandt for Bruce Springsteen’s “Born In the U.S.A.” tour in ’85-’86, and became a full member of the E Street Band when Springsteen reunited the group in 1999. Returning to the role of rhythm guitarist and singing background harmonies with Young and Crazy Horse, Lofgren makes his presence most obviously felt, surprisingly enough, on the piano ballad love-song, “Eternity,” where he can be heard tap dancing.
Now, “piano ballad” may be the last words that come to mind when you think of Neil Young with Crazy Horse, you’re more likely to call to mind the distorted electric sludge rock guitars of “Hey Hey, My My (Out of the Blue/Into the Black),” and there’s some of that here. “Shut It Down,” an angry rant about “people trying to save this world from an ugly death,” is a crunchy rocker, as is the slower moving “Help Me Lose My Mind,” the title offering what is perhaps the last reasonable solution for how to survive in a world gone mad. Both feature Young’s emotional guitar soloing, where it sounds like he’s strangling the notes out of the neck of his guitar. But it’s the long, rambling rocker “She Showed Me Love,” where Young stretches out and really works the kinks out of his guitar licks for nearly 14 minutes.
But, largely Colorado finds Young and the Horse working out in more accessible folk and country rooted rockers, like the harmonica shaped opener, “Think of Me,” with Lofgren and Talbot singing vocal harmonies. Electric guitars spice up the folk rockers with a cause that are “Green Is Blue,” another take on climate change,” and “Rainbows of Color,” a hippie political anthem of love for immigrants and people of color in a nation where racism continues to rear its ugly head. “Milky Way” is a bit of 60’s psychedelia that feels like it could have come from Young’s days of collaboration with Crosby, Stills & Nash, as is the aforementioned, “Olden Days,” which finds the forward thinker engaged in a bit of welcome nostalgia. Leaves me thinking there may still be a few more future reunions in store before Young abandons the mortal coil, or at least hoping.
In addition to the audio recording, Young, his record company Reprise/Warner, worked with Shakey Pictures and cinematographer Adam C.K. Vollick, to film a “making of the record documentary,” titled “Mountaintop,” which in collaboration with Abramorama was shown in theaters across North America on October 22. The film delivers an intimate look at the recording process at Studio In the Clouds, in Rocky Mountain, in the album title state of Colorado, as Young and his old friends play together between taking quick hits of oxygen to cope with working at the high altitude. Young is notoriously difficult, often described as perfectionist, so his interactions with producer John Hanlon and the other crew range from the band laughing together listening to a good playback of a song to cursing him out because the monitors are feeding back. After receiving a compliment from Young over a song’s mix, Hanlon says “it’s scary when you’re that nice.” And, at a significant moment, Young describes what works when he plays with Crazy Horse, “it doesn’t have to be good, because it’s going to be great.”

While it appears the Young delivers most of his lead vocals and guitar solos while the quartet are playing together in the studio, which gives the album the feel of a live sound. Some of the more interesting aspects of the film involve the overdubbing of backing harmony vocals, often with the four guys singing together, and Lofgren adding parts on pump organ or Young playing vibes. It appears that several songs incorporate live recordings of previous solo concerts, with Young singing at piano, and then giving them the full Crazy Horse treatment in the studio. After one particularly effective live recording session, someone playfully describes Young’s spirited vocal as “reckless narration with pitch.” And, you kind of have to love that. The prolific Neil Young continues to deliver heartfelt music, and this time around he has found the right songs for this moment and this band. Colorado is another solid artistic statement, which Young has dedicated to his career long manager, Elliot Roberts, who died this summer.
Key Tracks: “Think of Me” / “Milky Way” / “Olden Days”
Artists With Similar Fire: Bob Dylan / Robbie Robertson / Richard Thompson
Neil Young Website
Neil Young Facebook
Reprise Records
– Reviewed by Brian Q. Newcomb

The Raconteurs – “Somedays (I Don’t Feel Like Trying)” [Video]