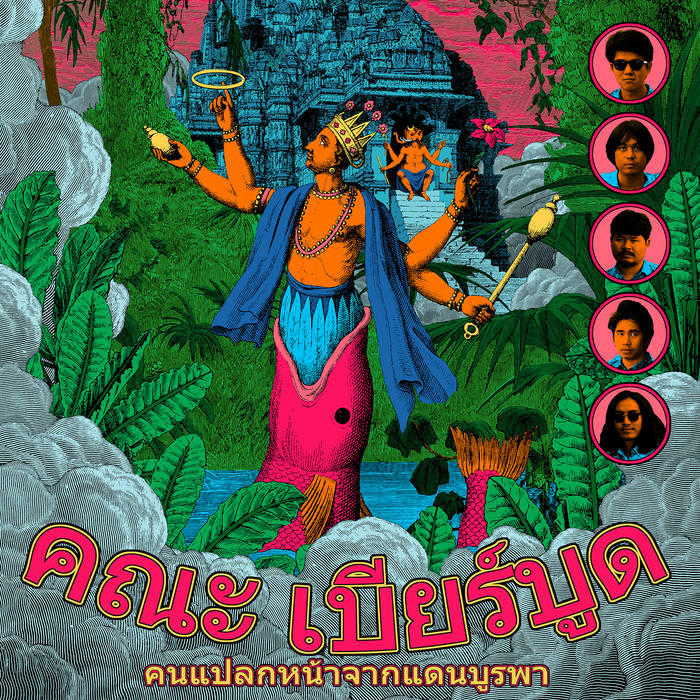 Who: Khana Bierbood (translated as Strange Brew in Thai), formed in 2012, in Bangsaen Beach, Thailand. After hours of jamming together they created their unique sound.
Sound: Surf psychedelic rock that also includes lo-fi garage and fuzz. Not only for fans of label mates Kikagaku Moyo but Thee Oh Sees and King Gizzard & The Lizard Wizard.
TFN Final Take: Last year saw the rise of the Guruguru Brain record label, which was driven from excellent releases from psych-rockers Kikagaku Moyo, Sundays & Cybele and Minami Deutsch. Khana Bierbood’s debut LP, Strangers From The Far East, is the labels first release of 2019 and it is another rolling psych adventure.
Right from the opening jet sounds on first track “Rustic Song,” you can just feel your ears being transported to a different time and space. The surf guitar takes over before then moving towards a blended traditional Thai morlam music sound. The band never gives up their roots with the incorporated Thai music and non-English lyrics but Khana Bierbood do tap other genres on the way like the more indie jangler “Plankton Bloom,” or the fuzzier rocker “Bad Trip.”
The album was produced by Go Kurosawa of Kikagaku Moyo in Tokyo, and you can hear his influence on the band. Even though Strangers From The Far East falls into the psych-rock genre it does keep the songs running times tidier with the longest track being “Jeanmaryn” at just over 4-minutes. This definitely keeps Khana Bierbood focused but you also know they still have another gear for a future release. Khana Bierbood absolutely are a group to keep an ear on so if you are looking for something just a bit different make sure to check this album out.
Khana Bierbood Website
Khana Bierbood Facebook
Guruguru Brain
– Reviewed by Christopher Anthony