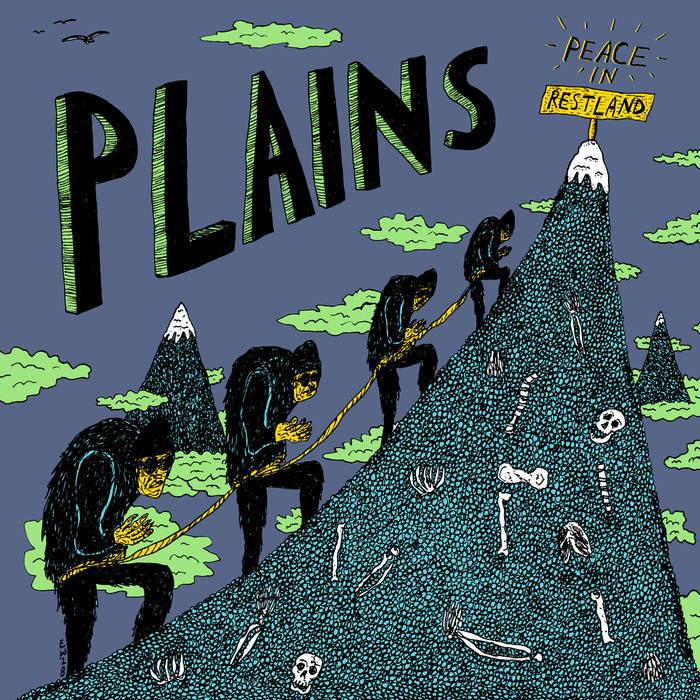 Who: Plains are a Newmarket, New Hampshire-based quartet .
Sound: Peace in Restland, Plains debut LP, is an engaging blend of psychedelic Americana folk and punk.
TFN Final Take: I decided to check out Plains on a whim after seeing their name on a show poster as a supporting act for Rick Rude along with Greed Island. I love both those bands, so I gave them a whirl.
Glad I did. This debut LP is fantastic. Peace in Restland hits many sonic sweet spots for me. Plains blend and distort their different influences into a cohesive and intriguing sound that should appeal to fans of Built to Spill, Silver Jews, and Baked.
Blending Americana/folk with psychedelic fuzz and punk rock ethos is not always an easy or enviable task, but Plains pulled it off with aplomb. Peace in Restland and Baked’s Farnham are some of the rare instances, in recent memory, where this heady combination works so well together.
Album opener, “Peace in Restland,” starts things with a peaceful and mellow instrumental beginning. Track 2, “Liar,” goes from a languid push/pull rhythm to a psych-tinged scorcher. I love the contrast of ideas, not just from song to song, but the melding of those ideas within an individual song.
“S.F.L.C.B.” channels Silver Jews by way of Sat Nite Duets. A fun and gently meandering tune that just ambles along gracefully. Plains really hit their stride with “Pancakes, ““Highway,” “Subtle Genius,” “I’m Not Here,” and album closer,” Jazz Cabbage.” Each track boasts clever song writing, distinct, but soothing vocals, and their penchant for belting out some thick sonic reverb that would make Doug Martsch proud.
“Tim’s Tab” and “Barrel Rider” round out the album and show Plains’ punk-side. Both tracks are boisterous and heavy rippers, but they never feel out of place among the rest of Peace of Restland’s more laidback sound.
Once again, I am enamored with a band from New Hampshire. First Rick Rude, then Greed Island, now Plains. All three bands need to be on your music radar. Peace of Restland needs to be heard. Plains are for real.
Plains Website
Plains Facebook
– Reviewed by Daniel Taylor