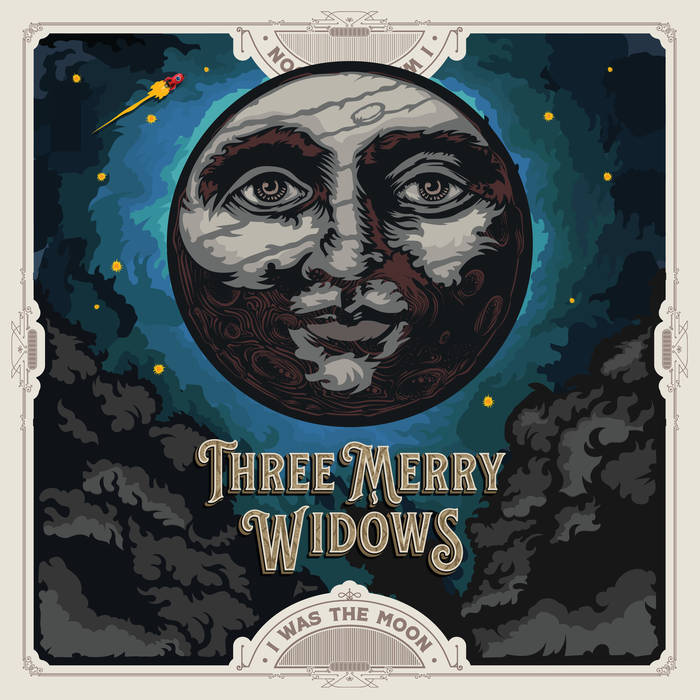 Three Merry Widows
I Was The Moon
Self-Released [2019]

Fire Note Says: St. Louis folk rock band, Three Merry Widows reunites after 28 years to produce their sophomore album, a collection of mature folk rock songs that will leave you wanting more.
Album Review: Once upon a time, the early 90’s to be exact, in the river city of St. Louis a number of original music bands playing the club scene were generating major label/recording company interest. There were Americana forebears like Uncle Tupelo and Bottle Rockets, the hardcore punk/ska of The Urge, alt-rockers like Big Fun and The Eyes (who became Pale Divine, which launched guitarist Richard Fortus, currently of Guns N’ Roses). Another fine band coming up through Cicero’s Basement Bar, Three Merry Widows played a trippy brand of folk rock reminiscent of the Fairport Convention and Jefferson Airplane, with a spry mix of blue grass meets jam band musicality and blues rock power a la the Grateful Dead and Janis Joplin singing with Big Brother & the Holding Company. Ambitious, the band traveled to Boston, and signed to TVT records, which released their 1991 debut, Which Dreamed It? That year, Three Merry Widows won The Riverfront Times Readers’ Poll in 6 categories, including Best Rock Band, Best Alternative, Best Original Music and Best Female Vocalist, and the band toured the nation playing shows with the likes of The Connell’s, Soul Asylum and Nirvana. However, when they turned in demos for their sophomore album, the label didn’t hear a “hit” and the band got dropped and in time broke up.
Now, 28 years later, the members of Three Merry Widows, currently spread to the four winds, after a triumphant reunion concert in the Lou in 2015, have been steadily working on their long-overdue sophomore release, taking many of the songs originally written back in the day and updating them here to strong results. Assuming the TVT heard many of these songs in at least demo form, it’s confusing that a band of this caliber and with such a fine lead singer as Alice Spencer wasn’t sent back into the studio. These days, of course, 3MW won’t be competing with Cardi B. as current day hitmakers, but they bring strong songwriting together with mature musical chops and inviting vocals together in music that honors the spirit of their inspirations while developing a truly unique presence. Spencer, whose been part of the music scene in Austin, TX, for a couple decades, is joined on vocals by Sean Garcia who together with Brian Simpson plays guitars, Charles Shipman plays bass and Danny Hommes plays drums, replacing original member Matt Albert.
I Was the Moon opens with Garcia and Spencer singing a cappella on a catchy line that recalls David Crosby and Graham Nash at their best, and 3 Merry Widows are smart enough to repeat it mid-song. “Coke Bottle Glasses” follows with quick paced folk rock number, featuring Spencer’s strong vocal lead. It’s one of several songs that features Kevin Buckley on fiddle alongside Simpson’s banjo, which gives the song an old world folk feel that is both retro and yet, in another way, timeless and unbound to the past the way good music transcends any one category and definition. “Who You Are” feels like a a classic rocker, hung on Spencer’s strong melodicism and powerful voice, while Garcia serves up some soulful electric guitar playing. All these years later, Three Merry Widows find a unique connection between classic formulations and vibrant, relevant musical territory. “Flying” gets closest to that trippy tone of early Airplane, where Spencer and Garcia mingle harmonies as Grace Slick and Paul Kantner did on the choruses of “Somebody to Love.”
Three Merry Widows strike a nice balance of energies on this sophomore effort, placing acoustic ballads, like “Jar” and “Billy She Said,” in between livelier folk rockers like “All Through the Day,” a fiddle song that gives Buckley some room to run, while “Walks on the Water” develops from a simple banjo part to a full-blown rocker. Throughout these songs, Spencer’s voice is a potent force to reckon with, and she reveals some of her jazzy roots on the title track, with a bit of skat vocals, reminiscent of the numerous youtube videos of her singing with blues and jazz musicians in the Austin scene, making listeners want to hear more.
While this reunion may feel nostalgic to those who were around the Lou in the early 90’s and tuned into the original music scene that birthed the band the first time around, for many who are encountering the lush musicality of this folk rock quintet for the first time, Three Merry Widows has made a strong case for mature musicianship and the crafting and reinvention of a winning sound. Here’s hoping that this 28 year dry spell isn’t repeated but that this fine indie band finds a path forward to future musical releases.
Two final points: I Was The Moon is currently available as a digital download, but they will be selling a limited edition vinyl pressing of the album at their St. Louis reunion concert on April 5 at the Delmar Hall. And a piece of trivia: The band’s moniker, Three Merry Widows, came from William Faulkner’s novel, “The Sound and the Fury,” where it was included as a brand of condoms.
Key Tracks: “Who You Are” / “All That There Is” / “Coke Bottle Glasses”
Artists With Similar Fire: Jefferson Airplane / Fairport Convention / Edie Brickell & The New Bohemians
Three Merry Widows Website
Three Merry Widows Facebook
Three Merry Widows Bandcamp
– Reviewed by Brian Q. Newcomb