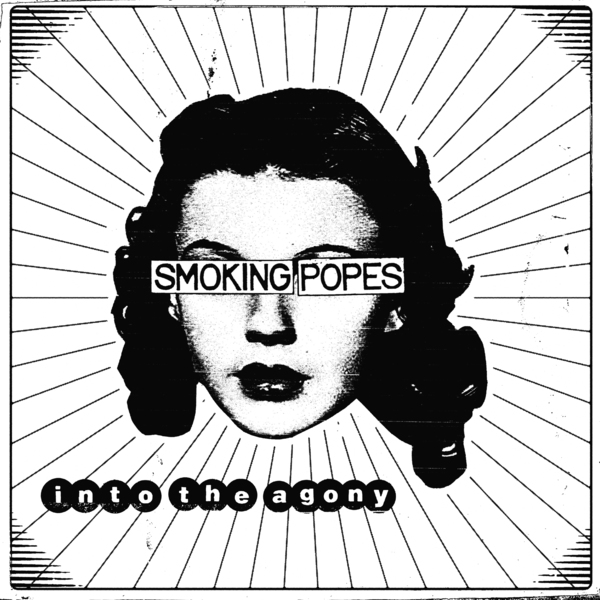 Fire Note Says: Chicago punk/pop Smoking Popes return with original line-up, and nod their heads as much to Judy Garland as they do to Jesus.
Album Review: One of the albums that got lost in the shuffle of new releases late in the fall that’s worthy of our attention was the return of the original Smoking Popes line-up on Into the Agony, the first full-length since 2011, and the first recording since the reunion with drummer Mike Felumlee who left the band in the late 90’s.
Of course, it’s impossible to discuss the Smoking Popes without considering their break-up due to singer Josh Caterer’s conversion to Christianity, which led him to leave and start the band, Duvall, as a vehicle to express his newfound spiritual convictions. In time, Josh C. returned to the Popes, his band of actual brothers – Eli Caterer on guitar, and Matt Caterer on bass – and made peace with the whole idea of living “in the world but not of it,” that has perplexed spiritually oriented musicians ever since Gospel singers started mixing the music they sang on Sunday mornings with the songs they danced to on Saturday night, and Rock & Roll was born. It’s something that has haunted bands like U2, The Call, King’s X, Underoath, The Choir, and the 77’s throughout the years, while they wrestled at various levels of success, the best of them avoiding the trap of getting stuck in the religious sub-culture by simplifying their artistic vision down to the size of a religious tract.
For the most part, Smoking Popes manage just that balance on this latest outing, aided by the unique blend of Josh C.’s boy-band crooner vocals and the band’s punk rock songwriting and energy. And it doesn’t hurt that the most obvious, somewhat preachy song on the album is a cover of “Get Happy,” that goes all the way back to Oscar-winning actress, Judy Garland – Dorothy in “The Wizard of Oz” and the ingénue in the original “A Star Is Born,” that Judy Garland—complete with its “hallelujahs” and it’s admonition to “get ready for the Judgement Day,” and “the Promised Land.” Caterer has said that the song that precedes this fast fun romp through the old classic, “When You Want Something,” was inspired by Garland’s dissatisfied life, which explains her portrait on the album’s cover.
And it’s certainly smart that these songs follow the disc’s strong opening salvo of “Simmer Down,” all crunch rhythm guitars and pop hook strong enough to put the Smoking Popes on the radio alongside bands like Green Day and Offspring. “I Can Feel You,” and “Amanda My Love” rock with that same intensity. “Little Lump of Coal,” feels all preachy and judgmental, but it’s about climate change, and the insistence by the current administration to resurrect the coal industry, revealing the ironic similarity between True Believers, whether it’s religious fundamentalism or similarly tenacious environmentalism. “Melting America” is really the only song that calls out the name of Jesus, as well as Martin Luther King, and like “Coal” it’s more about the issue of immigration, the Wall, and the failure of our nation to embody its values of inclusion and a cultural melting pot than any religious message. Caterer trades lead vocals here with Tobin Bawinkel, of the Christian Celtic punk band Flatfoot 56, also from Chicago.
Smoking Popes continue to deliver a fun, compelling sound rooted in solid songwriting, and they’ve found a balanced way to express their faith values without limiting themselves to a church basement audience. The question as always, in this situation, has more to do with the band’s previous fan-base and their capacity to attract new listeners. Tracks like “Simmer Down” suggest they have found a formula they can build on.
Key Tracks: “Simmer Down” / “Amanda My Love” / “Get Happy”
Artists With Similar Fire: Green Day / Dashboard Confessional / Flatfoot 56
Smoking Popes Website
smoking Popes Facebook
Asian Man Records
– Reviewed by Brian Q. Newcomb