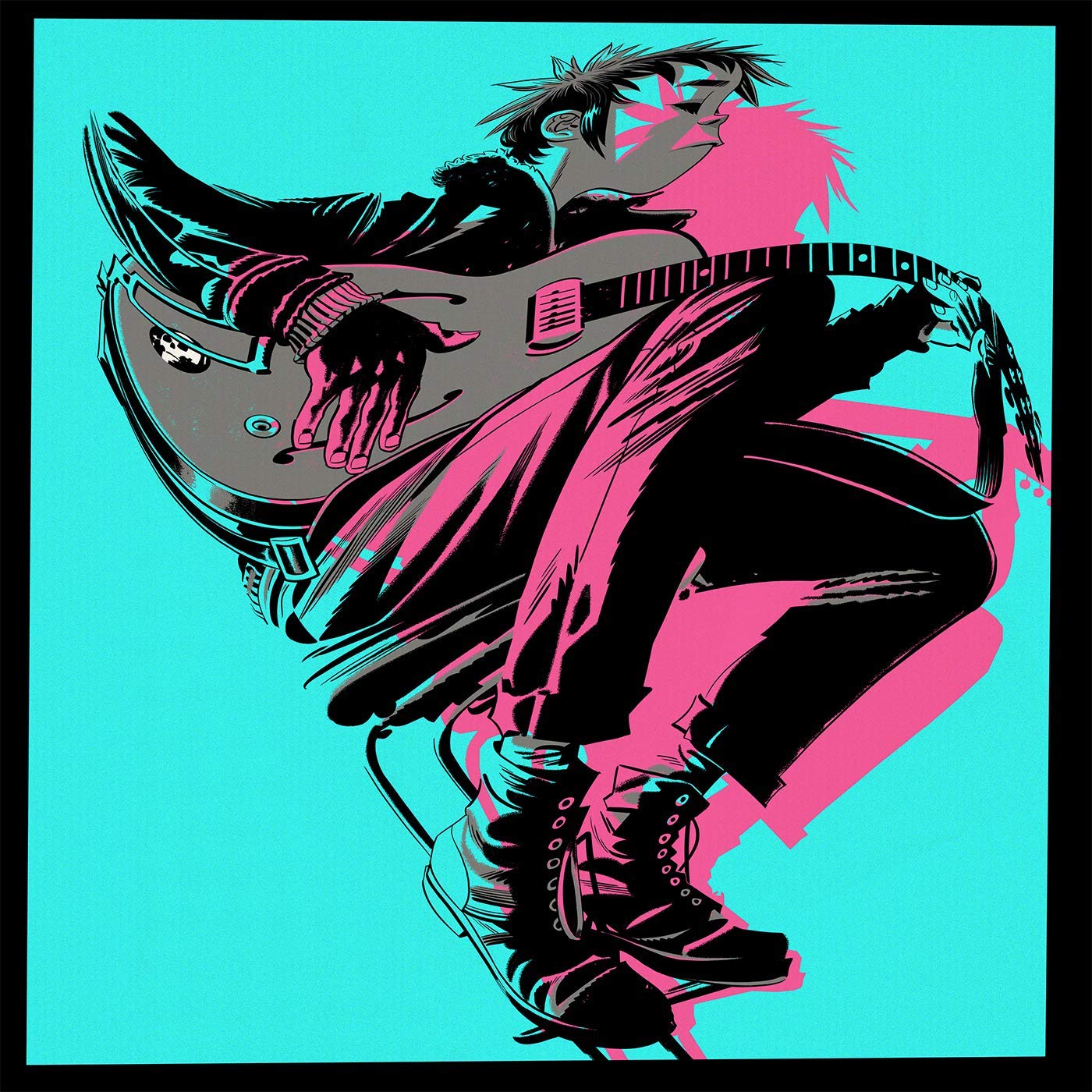 Fire Note Says: The follow-up to last year’s “Humanz,” finds Gorillaz leaning more on singer Damon Albarn (Blur) than the hip-hop collaborations that drove previous hits up the charts.
Album Review: The Gorillaz concept – a virtual band with animated characters drawn by artist Jamie Hewlett with music created by The Blur’s Damon Albarn that includes a variety of guest musicians, rappers and singers, playing a somewhat “futuristic” amalgam of electronic pop, hip-hop, and rock – is so cool, that if it didn’t exist we’d be tempted to invent it ourselves. At least that’s how it felt all the way back in 2001 when the omnipresent “Clint Eastwood” single/video dominated the music world with its mixed of a trippy chorus sung by Albarn (“the future is comin’ on”) and smart rapped verses by Del the Funky Homosapien. And it felt no less significant when lightning struck twice with the release of “Feel Good Inc.,” from the album “Demon Days,” which featured De La Soul.
Arriving just a year after the guest star dominated “Humanz,” with many of the songs purportedly written on the road during the Gorillaz tour, The Now Now starts off with the similar energy and spark as previous efforts, but as the disc drifts toward mid-tempo pop/ballads with Albarn’s effects-heavy vocal drifting in over a more settled, simple and relaxed rhythm track perked up with electronic keyboard enhancements.
“Humility,” the opening track and first single/video, benefits from jazz guitarist George Benson’s bright, soulful playing (which is imitated in the video by Jack Black pretending to perform on a lovely Gibson jazz guitar), followed by “Tranz,” which addresses personal and sexual identity in the poignant question “do you look like me, do you feel like me?,” delivered over a punchy EMD pop format that cries out for a dance club remix. Next up, “Hollywood,” similarly asks about our standards for beauty and the way jealousy can motivate people, which features rapped verses by Jamie Principle and Snoop Dogg.
But the remainder of The Now Now, is best defined by “Kansas,” which in spite of it’s bass-y keyboard and clap-track rhythm is a rather maudlin ballad shaped by Albarn’s sad reflection of resolve: “I’m not gonna cry. I will find another dream.” Since there are no other guest rappers or vocalists to accommodate, we lose that fun mix of musical genres that have informed Gorillaz more groundbreaking and commercially successful efforts in the past.
Albarn’s distant, haunted vocals float over slower rhythm tracks sets the emotional tone, no matter how well enhanced by the supporting players and electronic loops on tracks like “Sorcererz,” “Magic City,” and “Fire Flies.” The result is a mature, pop record, which is pleasant in its own right, but like Albarn’s 2014 solo album “Everyday Robots,” leans more toward quieter, reflective balladry. All of which begs the question, is that what we want and expect from Gorillaz or are we hoping to experience something more surreal that smacks of a future where genre mixing punks have escaped musical conventions to find their own way.
I’m inclined more toward the latter, an extension of “Humanz” closing anthemic proclamation and party starter that is “We Got the Power,” than Albarn feeling lonely in “Idaho” or floating listlessly in this album’s closer, “Souk Eye.”
Key Tracks: “Humility” / “Tranz” / “Hollywood”
Artists With Similar Fire: Arctic Monkeys / Franz Ferdinand / Beck
Gorillaz Website
Gorillaz Facebook
Warner Bros. Records
– Reviewed by Brian Q. Newcomb

Death Valley Girls – “Disaster (Is What We’re After)” [Video]