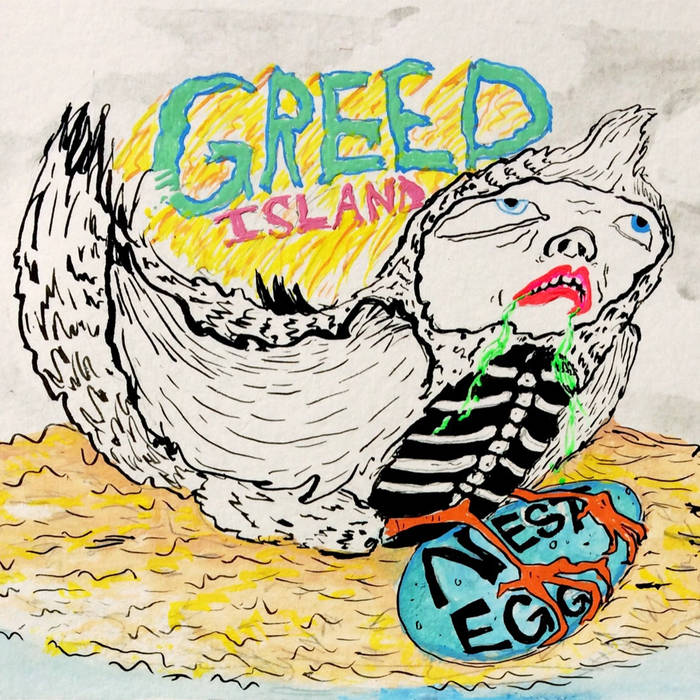 Who: Dover, New Hampshire’s Greed Island 7-track EP, Nest Egg, is one of the best things I have heard in 2018.
Sound: Greed Island generate a heady buzz with their brand of indie guitar rock that will remind listeners of Archers of Loaf, Pavement and Dinosaur Jr.
TFN Final Take: Around June of last year I was falling in love with Rick Rude’s brilliant LP, Make Mine Tuesday. With adoration comes the inevitable following of the band on social media, which I did. Flash forward to earlier this year; Rick Rude shared a song from Greed Island. I did not have time to listen to the track, so I saved the post for later listening. By the time I got around to listening to the track, the link was dead. Seems Greed Island are a bit shy about posting.
Luckily, Greed Island had Nest Egg up on their Bandcamp page. After hearing just a few notes of the album opener, “Movers,” I was moved… to buy this EP. Nest Egg hits all the sweets spots that I love about indie rock. They have jangly to swirling to buzzing guitars, unexpected shifts, and an effortless sheen of cool. Greed Island stokes the embers of my nostalgia for 90’s indie rock.
The sounds and possible influences shift from song to song. One minute you can hear what it might sound like if Interpol covered a Pavement song with “Charlie” and the next they are channeling Archers of Loaf by way of Swirlies on the upbeat “Lunchbox.” The undercurrent of swirling shoegaze-ish guitars hits even harder on “Gwendolyn,” which is accented with a hint of Dinosaur Jr. attitude and guitar heroics.
Track 5, “Jerkwad” summarizes pretty much everything I love about Nest Egg. “Jerkwad” is a sensational, off kilter slacker-rock anthem that is destined make a believer out of the listener. If this track doesn’t have you scrambling for the “Buy Digital Album” link on their Bandcamp page, then nothing will.
The 7-track EP throws a lot at you over its 25-minute length, but it so damn catchy and interesting, you will be ready to hit play again once the final notes of “Can” dissipate from your ears. If EPs are not your thing, then buy Greed Island’s first EP, Hamper and play the two albums back to back. Do what you have to do, but don’t miss out on this vital piece of indie rock.