Flotation Toy Warning: The Machine That Made Us [Album Review] 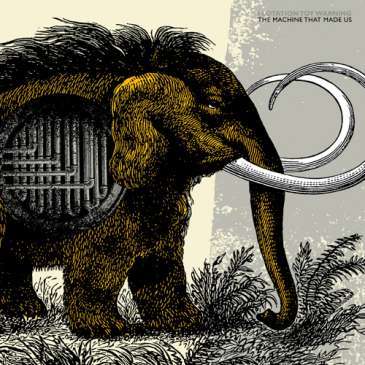 Flotation Toy Warning
The Machine That Made Us
Talitres [2017]

Fire Note Says: Flotation Toy Warning returns after a 13-year hiatus and deliver a staggering masterpiece.
Album Review: To say that I have been eagerly awaiting this album for some time would be a bit of an understatement. 2004’s Bluffer’s Guide to the Flight Deck is an all-time personal favorite. It sits comfortably with the likes of In the Aeroplane Over the Sea, Under the Bushes Under the Stars, Wowee Zowee, Bee Thousand and Doolittle in my collection of most-cherished indie rock albums.
Over the course of the decade-plus wait, there were rumors and teases of a new album, but nothing came to fruition. In 2011, FTW released When The Boat Comes Inside Your House / A Season Underground 7” and a new track appeared on a compilation in 2012. It seemed things had picked up steam, but then everything went quiet again and would remain that way for a few years.
2016 became the light at the end of the tunnel. Things were happening and it looked like us fans would finally have another FTW album to fawn over.
However, eagerness and anticipation can often end with massive disappoint. That is why it is my distinct pleasure to announce that Flotation Toy Warning are back in a big way and they have not missed a beat. If anything, the setbacks and frustration have made the band even stronger.
My first listen to The Machine That Made Us alleviated any worry that it would be a misfire. Subsequent listens revealed much more to my delight. This album is just a good as Bluffer’s Guide. It feels like a continuation of established Flotation Toy Warning sounds and builds on their foundation of quirky, melancholic, yet somehow hopeful, space rock.
The Machine That Made Us clocks in at just over an hour-long running time and encompasses 10 carefully crafted and beautifully layered songs. Each track is a journey, a chapter in a deliberately paced adventure novel. The music and lyrics fill your head with such strange and vivid visions that you cannot wait to get to the next chapter. You will need to spend some time with this album to appreciate it fully. If you have been looking for a reason to buy some high-quality headphones, this album is it.
Each of the 10 tracks has their particular charms and hooks, but I would be remiss if I did not mention “Due to Adverse Weather Conditions All of My Heroes Have Surrendered.” There is something about this bouncy, but not a 100% happy, FTW track. I think I have played it more than any other track this year. One of the catchiest FTW tracks they have ever recorded. Intriguing lyrics, a peppy rhythm and a brass horn hook that would render any Neutral Milk Hotel fan into a puddle of joy. Song of the year is not hyperbole. It is a real gem.
I sincerely hope The Machine That Made Us garners FTW enough attention and revenue that the band members can make a living off creating music. The world feels like a better place with Flotation Toy Warning making music. I smiled and I even cried while listening to this album. I give The Machine That Made Us my highest recommendation.
Key Tracks: “Due to Adverse Weather Conditions All of My Heroes Have Surrendered” / “King of Foxgloves” / “A Season Underground”
Artists With Similar Fire: Sparklehorse / Grandaddy / Neutral Milk Hotel