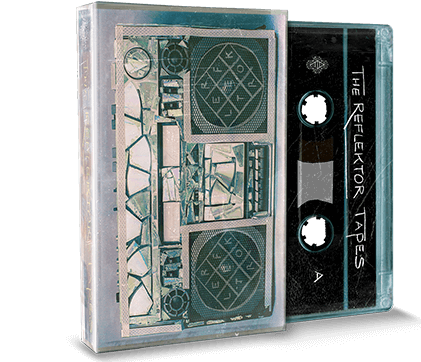 Fire Drill Album Review: In conjunction with the theatrical release of their feature film The Reflektor Tapes, Arcade Fire also released a deluxe edition of Reflektor (2013) with bonus tracks. Now, if you already have the record then this cassette-only release of the six unreleased songs is for you.
The mini-album features five never-before-released Arcade Fire songs and a remix of “Flashbulb Eyes,” with a total runtime of 27 minutes. Several of the tracks have been performed live, including stand out “Get Right,” so if you are a fan you will want to add this to your collection. Overall, the songs are more subdued compared to Reflektor but all have a very stylistic groove to them.
In this plastic package, you will hear some reggae, some honky-tonk and a closing sprawling ballad in “Crucified Again” that is memorable. Essential for casual fans – probably not. Worth a listen – absolutely.