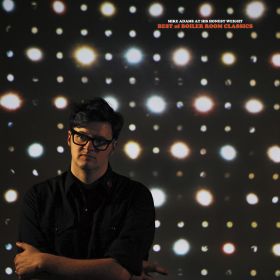 Fire Note Says: 60s and 70s style pop is given an electronically-inflected makeover on Best of the Boiler Room Classics.
Album Review: As any industry bigwig will tell you, a good pop song is a good pop song. You can wrap it up with guitars, package it with synthesizers, or propel it to the top with sampled beats, but a good song is a good song—the form it takes is secondary. Mike Adams (At His Honest Weight) writes pretty good pop songs, and if the outer shell is a little strange at first, the creamy song in the center is catchy and consistent enough to grow on you after a couple of listens. So while Best of the Boiler Room Classics doesn’t quite live up to the greatest hits promise of its title, it’s an album that will definitely appeal to the right kind of pop fan.
And let’s get one thing straight here: I’m not talking Robin Thicke, Miley Cyrus, Justin Timberlake pop—Mike Adams instead draws his inspiration from the Brian Wilson, Todd Rundgren, and brothers Gibb approach to pop. These are sweeping, dense pop songs with shades of melancholy, the kind of stuff that’s more suited to bedroom introspection than dance party gyrations. The late 60s and early 70s are musical touchstone for Boiler Room Classics, particularly the Beach Boys’ patented ballads of love, loss, and growing up. But Mike Adams filters these tracks through a lot of the styles that have come and gone between now and then—there are moody synths, drum machine beats, shoegaze guitars, string quartets, and just about as many different musical textures as you could imagine possibly working with this kind of material (and probably a few you wouldn’t).

Tracks like “Findings of a Feeling, Findings of Fact” demonstrate these unlikely marriages of style and sound—starting off with processed guitars and a heavy beat, at some point you notice all the mellotron, the vocal harmonies, and that “wall of sound” vibe underpinning the breezy melody over top and realize, “Hey—this guy has listened to Pet Sounds a lot;” but in no way is this a Wondermints-style tribute to America’s Band. Instrumental intro “If” fades into another interesting track, “Be Free, Live Well,” which sounds like a more mellow Postal Service track at first, until you get to the chorus where the track blooms into a thickly-layered blend of electric piano, hazy guitars, a hypnotic rhythm section, and Adams’ multi-tracked vocals. While Adams’ voice can feel a bit too “punky” for the material at times, in general his vocals are strong and work well with the songs and arrangements. Not everything works all the time—things occasionally get a little too synth-heavy—and tracks can blend into each other every once in a while; but overall there are more boiler room classics than misses.
I’m all for imitating your heroes as long as you put an interesting spin on things, and Mike Adams has done a pretty good job of that on Best of the Boiler Room Classics. It’s a well-produced and consistently enjoyable listen, and if it doesn’t quite make it into the league of its influences, it’s only because it sticks a little too close to them to make its own mark. As good as these tracks are, they make you wonder what Mike Adams might be capable of at the wheel of his own ship, rather than down in the boiler room.
Key Tracks: “Findings of a Feeling, Findings of Fact” / “Be Free, Live Well” / “The Fingers You Know”
Artists With Similar Fire: The Explorers Club / Starflyer 59 / Ra Ra Riot