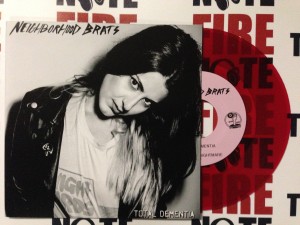 How about a female-fronted Black Flag? Sounds interesting doesn’t it. Well, Los Angeles band Neighborhood Brats is working on filling that wish with their new four song 7-inch on Dirtnap Records. Led by front woman Jenny Angelillo and guitarist George Rager, the Neighborhood Brats are joined on this record by a new rhythm section of Tommy Branch and Richie Cardenas. This expanded sound works well giving this 7-inch a sheer punk force and gets us all excited for a full length due out later this year. 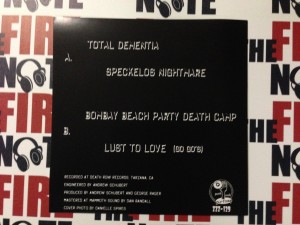 The A-side single, “Total Dementia,” is an electrified rocker complete with several “1,2,3,4” count-offs that keep everyone moving! Angelillo has a true vocal strength and just stays above the loud feedback of guitars and drums firing which is instantly likeable. The following two tracks are more rapid fire venom filled songs that don’t even hit the 2 minute mark so Neighborhood Brats barley let you take a breath. True punk rock! The final song on the B-side is an excellent cover of the Go-Go’s “Lust to Love,” which actually slows down a bit for the intro before tearing off. You might forget how much the original had this edge to it but it gets emphasized here by the Neighborhood Brats and Angelillo’s delivery. 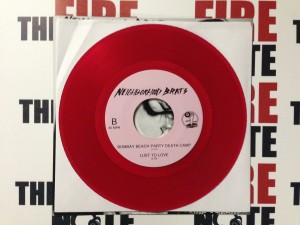 The jacket here is a normal cardboard cover with art on the front and back. This red 7-inch was limited to 200 copies from Dirtnap Records but is now sold out. You can still pick up a copy on black wax or start searching second hand markets for the red variant.