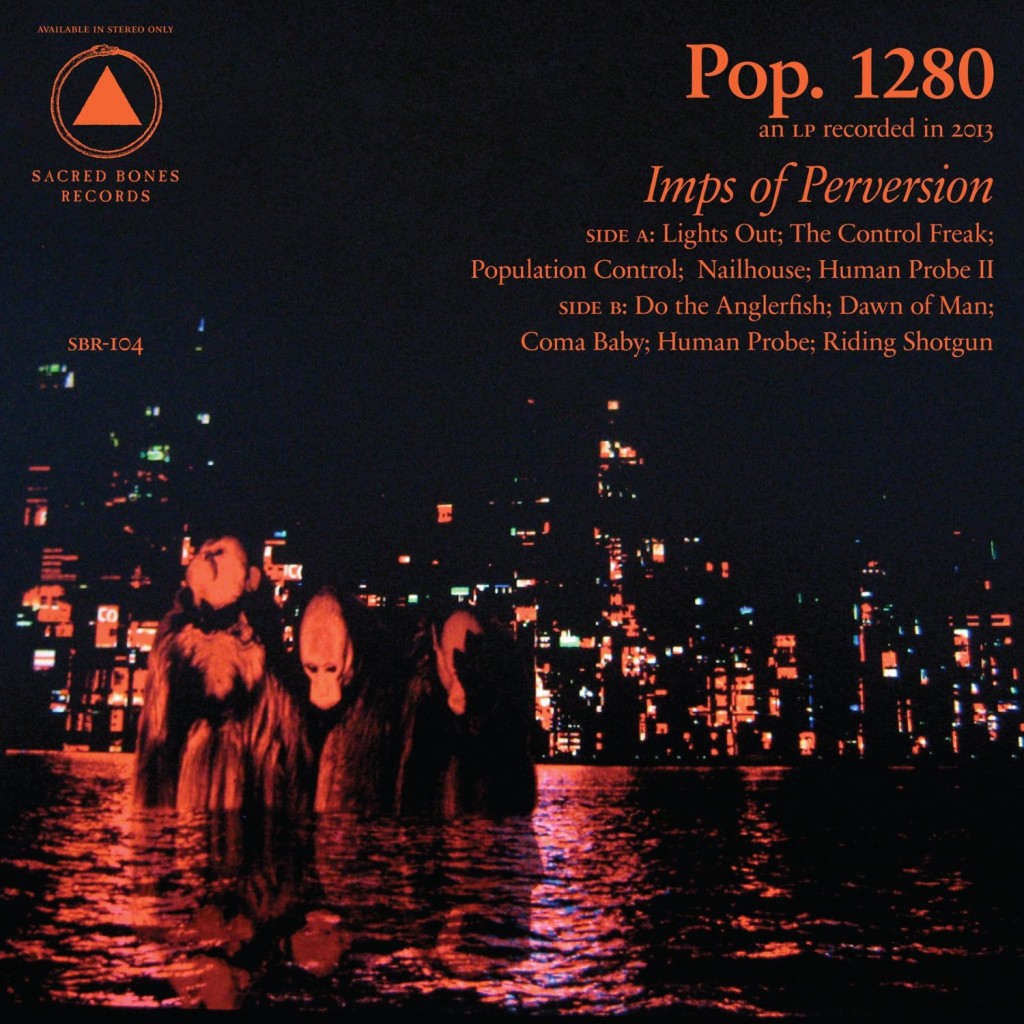 Fire Note Says: Pop. 1280 return with more noise rocking on sophomore record Imps Of Perversion.
Album Review: Are you searching for a new record to get your blood pumping? Look no further than this sophomore effort from Brooklyn’s Pop. 1280 because Imps Of Perversion is an ear rouser with its industrial punk aurora. The band returns with the same sort of hyped up venom that is not too different from their debut, The Horror, which was released last year.
Pop. 1280 show off their musical strength right away with the album opener “Lights Out” that has a solid drum beat and a slithering guitar that runs up and down the chords. This is all pulled together as singer Chris Bug launches his vocal attack that comes off with a controlled power that brings you right into the track. To say Imps Of Perversion relies on Bug’s vocals is an understatement. The over seven minute “Nailhouse” is totally supported by Bug as the background is a pulsing drum beat, strumming guitar and a drone humming synth. It is the type of track you fear to turn off but also fear to move forward. This is especially true as Bug’s spoken-sung vocals repeats “In a nailhouse with me.”

Even though the vocals here play a vital role the band should get credit for the chaos they cause. On “Do The Anglerfish,” Pop. 1280 create a space age theme song that whirls around at light speed while the catchy “Human Probe” has several parts that sound like a distorted haunted organ as it moves in and out as Bug does his thing. Without the intricate playing on these type tracks, Pop. 1280 would not have a complete identity.
Pop. 1280 won’t be for everyone as some listeners will just call it noise. Imps Of Perversion does lack some diversity and does not quite have the same impact as their debut. With that said, Imps is very similar to that record so, if you liked Pop. 1280 last year – you will like them this year. This is a band I would like to see evolve because they are so ingrained in (and very good at ) their art form that moving outside their comfort zone some could bring some stunning results. Imps Of Perversion is a record that is not for the meek and if you are up for a rush of adrenaline – Pop. 1280 will gladly inject you!
Key Tracks: “Lights Out”, “Do The Anglerfish”, “Human Probe”
Artists With Similar Fire: The Murder City Devils / Jesus Lizard / The Men
Pop. 1280 Website
Pop. 1280 Facebook
Sacred Bones Records
-Reviewed by Christopher Anthony