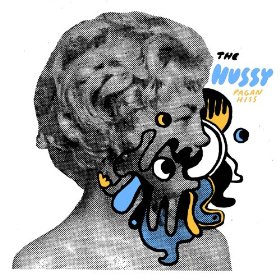 Fire Note Says: Frenetic Madison, Wisconsin duo stir up quite a ruckus on their third album.
Album Review: She (Heather Hussy) plays drums; he (Bobby Hussy) plays guitar. They both contribute on the vocal end of things so the White Stripes comparisons don’t fly. Besides, they share little of Jack White’s affection for Roots Rock. These two prefer to just rock. And on their third LP they do that in spades. Roaring out of the starting gate like crazed Mid-Westerners, Pagan Hiss is a wild ride full of verge and garage punk energy. What appear to be pretty simplistic songs have, in fact, a lot going on in them. One could be forgiven for thinking this was a monochromatic affair after the first three songs – all fury and bad intent. “Blame” sets the tone from the start. A catchy guitar riff and a barrage of thundering drums mask some weirdness going on in the background. You don’t really hear much of the chirping birds and other found sounds at first, but it definitely makes repeat listens more interesting. Bobby sings: “And I wish I could take the world/But I didn’t even know her name/So I ain’t gonna take the blame/We’re fine.” Things aren’t perfect, they could be better, but they could be a helluva lot worse too. The next song, “Right Quick,” clocks in at fifty seconds and that flows right into “Far Removed.” It’s another lesson in old-school punk with the “don’t get in my way” hook sounding more silly than ominous.
As those first three songs conclude we get a breather in the 60’s beach party jam, “Zummer.” It’s a good piece of song sequencing as the surf guitar and cheesy organ act like a pallet cleanser. Next up is “Zzuf” and it’s a cool song that finds Bobby and Heather singing together – more or less. Her voice pierces through the racket like a deranged banshee. “I Told You So” is notable for Heather’s early 80’s DC hardcore drumming. I swear she sounds like she’s been listening to her Government Issue, Black Market Baby or Second Wind (all really good bands, by the way.) They slow things down (a little) with the stunning “Woodland Creature.” At almost four minutes it acts as the centerpiece of the record and the Stooges vibe is a decent look for The Hussy. Acoustic guitar strumming and harmonica await us on “Rezhand” (what’s with these song titles anyways?) as they sing about wanting to see some adversary “fifteen feet under the ground.”

They keep things diverse throughout the second half of the album. “Clothes Mountain Pt. 2” is a sound collage, “Dying” has a great syncopated chorus. And they put the two best songs on Pagan Hiss right at the tail end. “HOC” utilizes fake crowd noise to great effect while the “please go away/please go away now” chorus is major fun. That cross-fades into “Dead To Me” with its backwards guitar solo providing a nice psychedelic touch to close things out. These two have a better record collection than they let on. The influences which are most obvious are not the most intrinsic to their sound. They play fast and loud with considerable abandon but also know how to create nuance and they structure songs in a tidy, easy-to-digest package. Fourteen songs zip past in less than 30 minutes. It is that economy that gives the longer songs their power and sense of importance to the whole. In short, Pagan Hiss is a good time waiting to happen. Put it on and let the party start.
Key Tracks: “HOC”, “Dead To Me”, “Blame”
Artists With Similar Fire: The Lovely Bad Things / King Tuff / Ty Segall
The Hussy Website
The Hussy Facebook
Southpaw Records
-Reviewed by Scot Lade