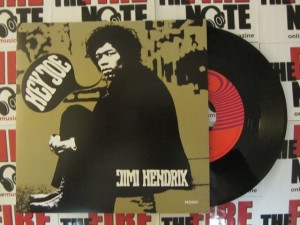 Coming direct from Record Store Day 2013 we have a little 45 that changed the face of rock n roll forever. By way of the Hendrix LLC group and Legacy Recordings, it’s The Jimi Hendrix Experience presenting “Hey Joe” along with “Stone Free”. Way back at the tail end of 1966 this debut single took the U.K. by storm and won the ears of many fans/greats such as Pete Townsend, Eric Clapton, and Keith Richards-Hendrix was of course famous in America, but Europe, mainly the U.K. gravitated to him very heavily and lifted him to god like status.
This RSD reissue presents the material mixed in its original mono form. Both these tracks are just simple tastes of what the Experience would usher in in the form of sound and culture with their full length debut. Side A is the every infamous cover of “Hey Joe”. If you know about rock n roll, especially classic rock then you’ve heard The Experience’s version of “Hey Joe”. The free form guitar manipulation is only impeccably enhanced by the angelic backing tones of all female vocal group The Breakaway’s. The solo is a man breaking away from all that holds him down. If I had to say it’s a gentile ferocity (A bit of an oxymoron) in blue scale form. Side B is Hendrix unleashed with original “Stone Free”. Featured here is a bit more of a rocking vibe compared to “Hey Joe”. The highlight is the “Turn me loose” section where Hendrix activates his famous fuzz face and solos into oblivion. 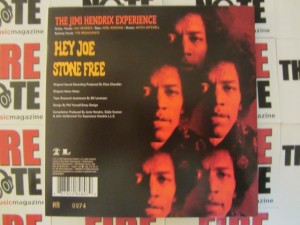 The7-inch jacket is a sturdy cardboard sleeve and the wax is just standard black. This particular RSD release was limited to 3000 copies and has the individual numbering pressed in gold font right on the jacket. This is one of my top RSD 45s for a reason, without the debut of this single who knows what would have happened to the rock n roll world. A great release and a historic event as well.
Jimi Hendrix Website
Jimi Hendrix Facebook
Legacy Recordings
-Feature by Christopher Tahy

Edward Sharpe Announce Self-Titled Album Due Out On July 23rd