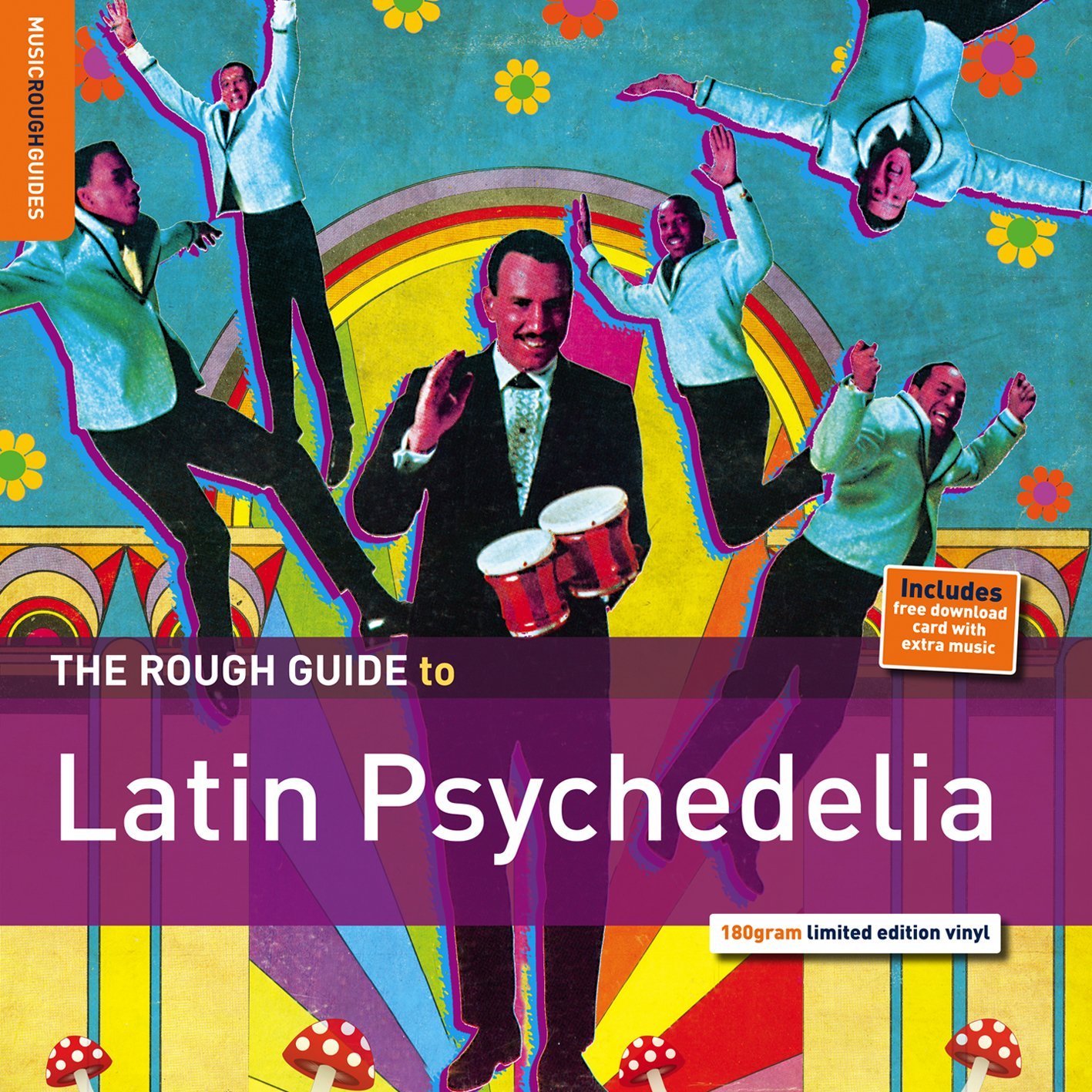 Fire Note Says: Latin rhythms meet slightly acidic arrangements—if you don’t like Santana, move on.
Album Review: Released as a special 180g vinyl edition for Record Store Day, The Rough Guide to Latin Psychedelia casts a wide net over the genre, throwing together ten tracks that range from vaguely “trippy” takes on traditional Latin music to full-blown psych-rock freakouts. The Joe Cuba Sextet starts things off with “Psychedelic Baby,” a fun, salsa-infused cut that sets the mood for the rest of the collection. “Cloud Nine” by Johnny Rivera & The Tequila Brass follows, but the only thing really “psychedelic” is the lyrics and the maniacal laughter that bursts in at random moments. Things get a little more interesting on “Guajira Psicodelica,” a fast-paced, hypnotic track that features Spanish lyrics (the first of many here) and a Santana-like vibe, bringing together multiple percussion instruments and a fuzzed-out guitar solo.
The percussion-fest continues with “A Drink or Two” (by Wild Wind), a mostly instrumental track with some freaky guitar and organ work and more bongos, congas, and drums than human ear can process at once. Closing side one is “Olvidalo” by Brownout, a track that begins with an almost hip-hop-style break beat and processed keyboards, after which the band throws in everything they’ve got: brass, guitars, (what sounds like) vocal samples, and more in a truly disorienting yet strangely satisfying track.

Side two kicks off with Juan Pablo Torres’ “Pastel en Descarga,” which might sound like a lost garage-rock instrumental classic if it weren’t for the horn stabs (which are downright funny at times) and the seemingly ever-present—on this compilation anyway—Santana-style percussion backing. Following this track is another that reminds the listener that this compilation is supposed to cover psychedelia. “La Playa Dorada” (by Tita Duval Y El Nuevo Ritmo De Bobby Rey) gets downright weird in spots, with its bass-y organ groove and slithering guitar lines. “Baila Mi Rumbita” by Afrosound (feat. Jamie Ley) comes next, sounding like a typical Latin dance-party number with a distorted guitar solo grafted on at opportune moments.
Conjunto El Opio’s “Piratas En El Titicaca” puts the focus on the fuzz, with heavily distorted guitars accompanied by more brass and an over-the-top vocal that actually sort of sounds like Jack Black singing in Spanish at some points. Side two’s finale, “La Pelea Del Gobernador” by Los Texao, begins with a catchy guitar/organ riff, and is probably the closest thing here to a true 60s-style garage-psych track: the riff repeats endlessly, and the lead vocal has a sneer that places it more firmly in that genre than most of the other songs here. The only thing that detracts from the illusion is the flute solo in the middle, which isn’t so much bad as it is out of place.
What the title says is true: this is a “rough guide.” It isn’t going to make you an expert on Latin psych, and probably doesn’t even give a totally accurate cross-section of the different styles encompassed by the genre. But what it does do is give you a set of music that is fun and different, and while it isn’t necessarily “essential listening,” if you enjoy Latin music to any extent (since, if you’re reading this, it’s safe to assume you like psychedelic rock) it’s not a bad way to spend a half-hour. (The Record Store Day vinyl pressing is limited to 750 copies and contains a download card for bonus tracks and a full-length album by Los Destellos; this review only covers the tracks on the vinyl LP.)
Key Tracks: “Psychedelic Baby”, “Guajira Psicodelica”, “La Playa Dorada”
Artists With Similar Fire: Santana / Sam the Sham & the Pharaohs / The Mars Volta
World Music Network
-Reviewed by Simon Workman

Crazy Joe: The Doctor Is In! [Album Review]