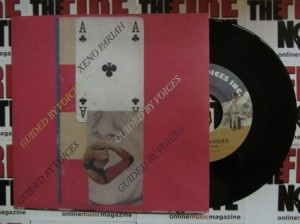 “Xeno Pariah” is the fourth single from Guided By Voices forthcoming full length English Little League which is due out on April 30th. The 7-inch A-side is track number one on Little League so fans will start to get eager for the full length release just listening to the opening guitar strums quickly build as Pollard sings the first already classic line “Xeno Pariah get out of the pool, I’ll fly you to school.” The mid-tempo track has a memorable beat, some sing-along moments and will leave you with good vibes and an even bigger anticipation for what English Little League will ultimately sound like.
The B-side offers the fans a real treat with the full band version of the 30 year old “Little Jimmy The Giant” (which you can hear exclusively below). The song originally appeared as an acoustic stripped down version on the first Suitcase box set compilation release. The track is one of the oldest songs ever recorded by GBV and this version easily surpasses the early acoustic offering as its rawer garage rock vibe will shake your speakers and highlights the big sound this lo-fi group from Dayton has carried with them from the beginning!

The jacket on this 7-inch has the soft paper feel of the earlier singles. The 45 is standard black, the label is the standard GBV Inc. imprint, the single includes a free digital download and the pressing is limited to 1000 copies worldwide.
Guided By Voices Website
Guided By Voices Facebook
Rockathon Records
Midheaven Mailorder 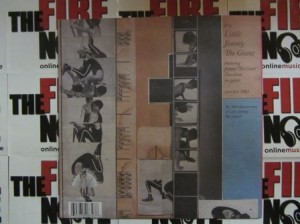