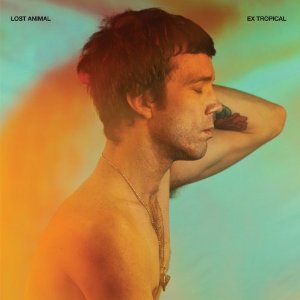 Fire Note Says: Lost Animal’s debut is an odd mix of ambient keyboards, colorful electronics, and half-sung half-spoken musings.
Album Review: Ex Tropical finds Jarrod Quarrell—the sole member of Lost Animal—using a bank of keyboards to craft a ten-track set of strange, atmospheric tunes. Drawing inspiration from his childhood in Papua New Guinea, as well as a plethora of musical influences, Quarrell’s songs hang together well as an album, with each track sounding like its own little musical planet within the larger Ex Tropical solar system.
Each track is stuffed with ideas, the music itself sounding like something David Byrne, Brian Eno, and Beck might come up with, while Quarrell’s vocals sound like a cross between early-70s Lou Reed and Tom Petty rapping enigmatic lyrics. This isn’t really a rap album, though; Quarrell’s vocals have just enough melody, and his backing tracks enough variation, to put Ex Tropical more in the “art rock” category. Beats and hypnotic bass lines provide a solid base for keyboard experimentation, with synth textures meshing with others that sound more like actual instruments, such as guitars, horns, steel drums and piano.

The lyrics, along with Quarrell’s delivery, give Ex Tropical its mysterious atmosphere while at the same time giving the album a very personal feel—it seems as if Quarrell is referring to specific situations and people, not just spouting artsy imagery. One example is “Say No To Thugs,” where Quarrell says to his unnamed subject: “Never get lessons in love / From an angry man / Never learn how to touch / When you reach out / For the things that you love / Could you stand by me / For just a little bit longer?” The backing track is an odd mix of tense cellos, moody piano, prominent bass and occasional synth-horn flourishes, which add to its uneasy ambience. Other interesting lyrical tidbits include “Lose the Baby,” with its chorus proclaiming: “And if you think that it cuts me up / I’m gonna sharpen up my tongue and really / Cut you up.” Meanwhile, “Don’t Litter,” features Quarrell reimagining Ben Frankin’s lightning experiment, singing: “In the thunder got wet with / E-lec-tri-cit-y / Attach the key to a kite / Set out to climb a tree.”
By using almost exclusively keyboards, Quarrell could’ve easily dug himself into a musical hole, but he’s able to avoid most of the pitfalls of keyboard-heavy albums—at no point does this sound like a synth-pop album, or an under-produced set of demos. While the strange sounds and lyrics may turn off some potential listeners, the songs themselves are strongly structured, with the experimentation serving mostly as a way to keep things interesting rather than being the focus. Ex Tropical is a unique album that combines a lot of sounds you wouldn’t think could work well together, making for a compelling, if sometimes challenging, listen.
Key Tracks: “Say No To Thugs”, “Cold Cut Nature”, “Lose The Baby”, “Old Lovers”
Artists With Similar Fire: Beck / Brian Eno / Gorillaz
Lost Animal Website
Lost Animal Facebook
Hardly Art Records
-Reviewed by Simon Workman