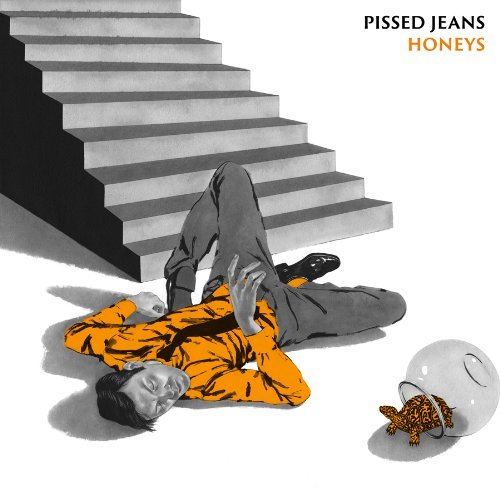 Fire Note Says: Honeys is a musical middle finger-and that happens to be a good thing.
Album Review: Pissed Jeans from Allentown, Pennsylvania has been on a conquest for domination ever since they started with their debut Shallow released in 2005 on label Parts Unknown. Now, some years and albums later we have Honeys via Sub Pop, their third full length for Sub Pop in fact with styles described as 80’s hardcore, punk, and noise that mostly seems to be true. But here on Honeys I hear a lot more in common with label mates of yesteryear Nirvana. Nirvana’s debut Bleach (1989) especially with beautiful feedback squeals, the heavy/sludgy aggression, haphazard vocals, and some fuzz of course for texture. Also, the sinister tones of the Butthole Surfers are lurking around this record too.
I say that Honeys is a musical middle finger and by no means do I mean that as an insult. It’s clear that if you have some experience with Pissed Jeans that you already know they have a bit of a tongue in cheek manner about them – one of their songs is called “I’ve Still Got You (Ice Cream)” for crying out loud. Here the themes are of the mundane things that people let get under their skin, it just seems to be another delicious addition to the f-you attitude. “Bathroom Laughter” brings the scuzz-fuzz acceleration and takes no prisoners right from the start. “Chain Worker” is just what you would think, but it is the Electric Wizard like sludge and rage induced teeth gritted vocal that make this track more than a novelty. “Cafeteria Food” is a dark, deadpan, vocal dirge that seems to be a death/failure of that project manager that everyone hates-you know who I’m talking about. “Male Gaze” is a stretched guitar that sways back and forth with just the right amount of vocal ass kickery.

What may have kicked this album up for me one notch higher are the back 4 tracks. “Cathouse” is the perfect rage inducing wall bouncer with a Queens of the Stone Age influenced guitar wail solo. “Loubs” is a grimy guitar slink about shoes, a vocal malaise to clash with the guttural wails just gives the track that little something extra. With “Health Plan” I have just as much appreciation for the lyrics as the Nirvana like assault. It goes “You want to know my secret, I stay away from doctors, Yeah, that’s how I stay fit, I stay away from doctors”, it’s dumb and fantastic. Final track, “Teenage Adult” sounds like a bit of a bastardization of QOTSA’s classic Rated R ender “I Think I Lost My Headache”.
There are deeper influences here than what I mentioned in the review but all you really need to know is that this record is a sweaty, shirtless, punk, booze brawl with wit and edge. Pissed Jeans’s Honeys left an impression on me because everyone needs music to kick the shit out of them sometimes, and here these guys prove they can do that!
Key Tracks: “Bathroom Laughter”, “Cafeteria Food”, “Loubs”
Artists With Similar Fire: Queens of the Stone Age / The Jesus Lizard / Flipper
Pissed Jeans Website
Pissed Jeans Facebook
Sub Pop Records
-Reviewed by Christopher Tahy