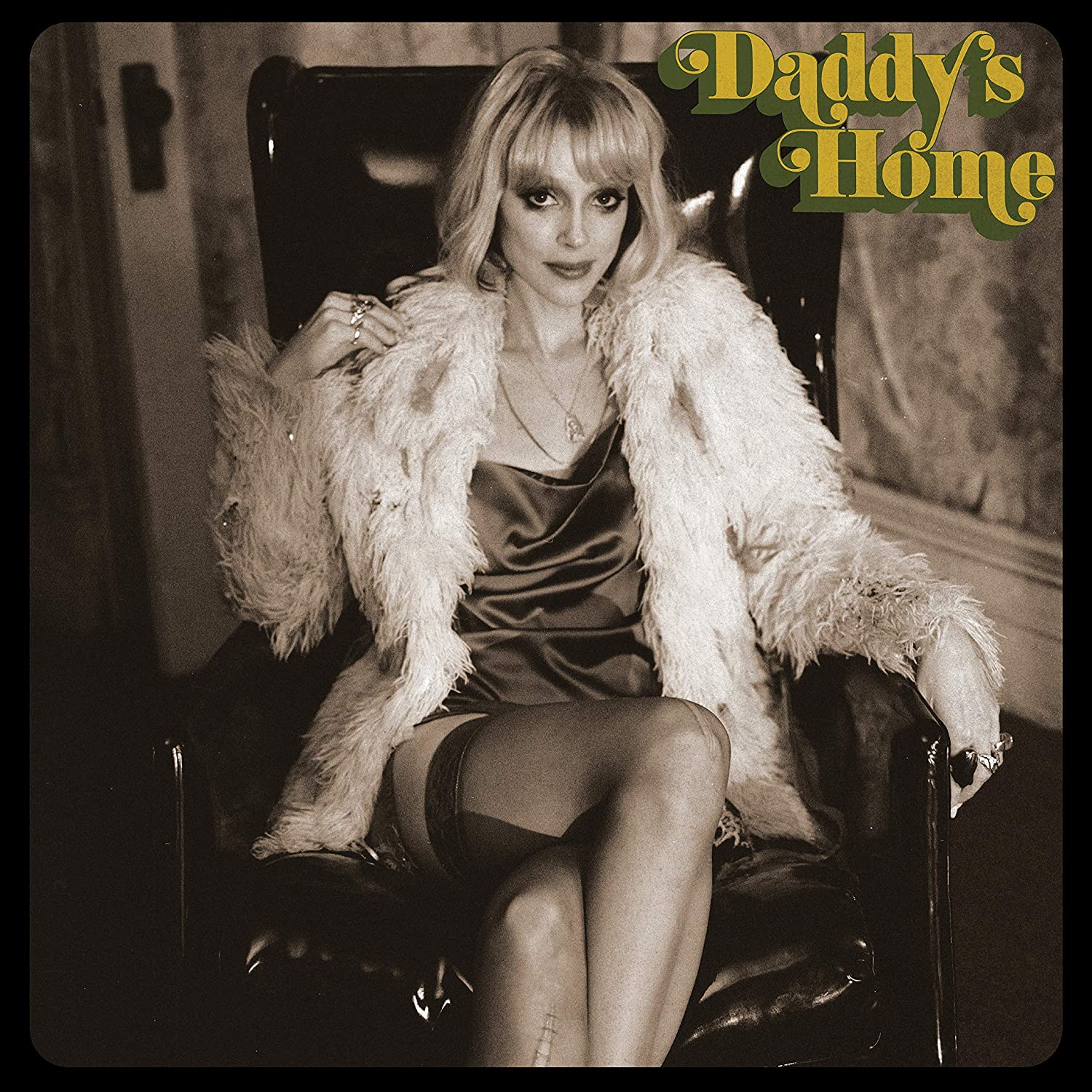 One of the most intriguing aspects of the musical artistry of St. Vincent, aka Annie Clark, is that as she adapts her musical style to match the artistic aim of each project, she evolves in the way she presents herself, adapting a character to fit the concept. On her 6th album, Daddy’s Home, she’s conceived a song cycle centered around the 2019 release of her father from nearly a decade in prison for white collar crime, looking back to the early influence she took from his record collection dominated by early 70’s recordings that captured the steamy urban drama of New York City nightlife.

In 2014, playing two from her self-titled album of that year on Saturday Night Live, St. Vincent struck a pose like a futuristic electronic pop automaton with rock goddess guitar chops. For her return earlier this Spring to debut “Pay Your Way in Pain” and “The Melting of the Sun,” she’d removed all the crisp edges and softened everything from her polyester and faux-fur disco wear, the curls of her bobbed blonde hair, the call and response female background singers, the tone of that Wurlitzer electric piano, and even the warmer tone of her guitar solo. It was a transformation worthy of an artist who claims David Bowie as a major influence, and who’s early career found her in Polyphonic Spree and Sufjan Stevens’ touring band, has recorded an album with David Byrne, and was one of five women who filled in for Kurt Cobain when Nirvana was inducted into the Rock & Roll Hall of Fame.

Part of the secret to producing the slinky, retro, 70’s pop vibe that Clark and returning producer Jack Antonoff were looking for is the instrumentation; that Wurlitzer for instance, as well as various old school synth settings, and on two tracks the mysterious clavinet for that funky “get down” sound. Of course, it helps that all the traditional instrumentation is played with a certain laid back, neo-soul, pop feel, a bit Steely Dan, a touch of light funk/R&B. And for some reason, Clark plays “sitar guitar” on 7 tracks. The feel throughout the record is inviting and catchy, but the real magic is in Clark’s lead vocals, which includes the more than occasional howl, and her melodic but conversational interactions with her background singers, Lynne Fiddmont and Kenya Hathaway.

In the album’s title track, she deals most directly with her father’s jail-time, describing how she “signed autographs in the visitation room,” then acknowledges the impact that comes from having a family member incarcerated: “you did some time, well, I did some time, too.” Elsewhere, Clark’s lyrics deal with the impact of living your life looking for a love to fill the resulting void; in “Pay Your Way in Pain,” the protagonist is emotionally bankrupt and the things required to get through the day bring either pain or shame. In “Down and Out Downtown,” she’s doing that morning after walk of shame in last night’s party shoes. A friend’s review pointed out the Pink Floyd influence in “Live in the Dream,” from the opening word, “Hello,” the guitar solo by Clark in the style of David Gilmore, and all the way to those high soaring female vocals in “The Great Gig in the Sky” from “Dark Side of the Moon,” and now that’s all I hear in that track.

In a familiar pattern, Clark actually name drops that Floyd album in “The Melting of the Sun,” where she mixes sitar psychedelia with soulful funk as she sends shout outs to innovative female artists, Joni Mitchell, Tori Amos, and Nina Simone, as well as “benzo beauty queen” Marilyn Monroe. Like much of the album, the more you hear this song, the better it sounds, the stronger the vibe grows. “The Laughing Man” is ironically one of the disc’s saddest tracks, recalling a past childhood friendship with someone who’s likely abandoned the mortal coil; she sings “if life’s a joke, then I’m dying laughing.” Clark rebounds with “Down,” again ironically one of the funkier, up-tempo songs on the album, this one about getting revenge with an abusive lover. “Somebody Like Me,” which incorporates some fun guitar and pedal steel interplay by Greg Leisz, is the song where she recovers a sense of self-esteem, even if it means accepting herself as “freak.”

By this point in the album, you get the sense of a personal narrative unfolding, whether it’s the real story of Annie Clark or the fictional character St. Vincent has created this performance art piece is not clear. “My Baby Wants a Baby” reveals a woman wrestling with her maternal instinct and her artistic ambition, not sure if they can actually co-exist. In the soulful horn-inflected R&B of “…At the Holiday Party,” Clark unpacks all the material things and artistic aspirations that we use to hide that we’re “not getting what you need,” but creating a sense of solidarity and commiseration in the admission that “you can’t hide from me.” The album’s closing track is a tribute to the life and spirit of “Candy Darling,” the trans woman who appeared in films by Andy Warhol and is mentioned in Lou Reed’s song “Walk on the Wild Side.” Clark imagines bringing Darling who died young a bouquet of “Red bodega roses,” for her last train ride off to the afterlife. It’s a fitting end, to St. Vincent’s portrait of being down and out on the city’s dark side a musical metaphor, like “Pilgrim’s Progress,” a somewhat spiritual journey through the sleazy underbelly of life. I would not recommend the actual experience, but the soundtrack is killer.