Too Much Joy: Mistakes Were Made [Album Review] 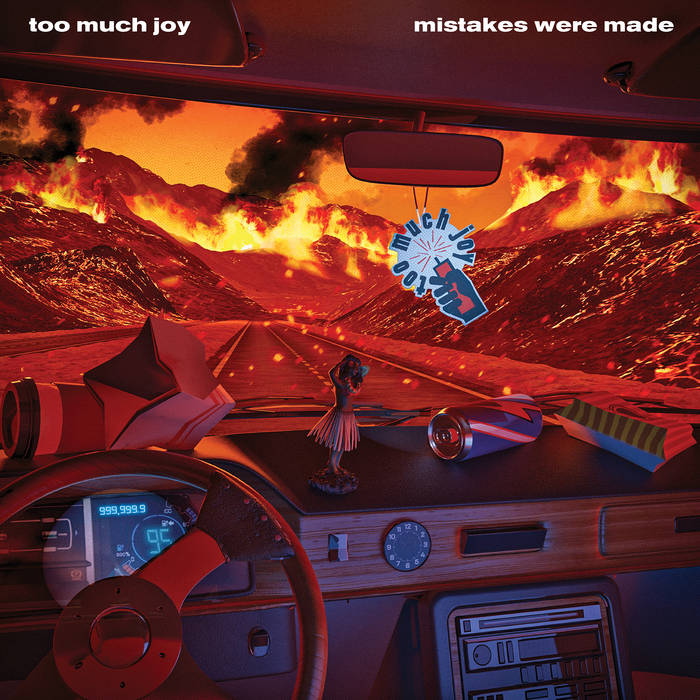 Too Much Joy
Mistakes Were Made
People Suck Music [2021]

Along with the quick arrival of life saving vaccines, you can count the return to recording by the late 80’s/early 90’s power pop/punk rockers Too Much Joy as something good that came from our year of COVID-19 shut-down. The Scarsdale, NY natives achieved a modicum of critical and commercial success with 1991’s Cereal Killers, then made a few more albums before cutting their losses. Part of the problem was that folk have trouble taking seriously a band writes funny songs, and TMJ’s penchant for clever, often comical lyrics tended to get them labeled as a novelty act and compared to contemporaries like They Might Be Giants and Barenaked Ladies (both bands made better music than they tended to get credit for). Satirists have always mixed pathos with humor, as these guys did in “Theme Song:” “We live for fun and freedom/We stamp out fear and greed/To create you must destroy/Smash a glass and cry Too Much Joy.”

The band blames the fact that they made a new album on their fans and because 2020 sucked so much. They had put much of their indie albums on bandcamp.com where fans continued to support them, which encouraged the original players to put together singles for Record Store Day, and then the boredom of the viral shut-down made working on a new album seem like a good idea, and enthused fans supported their IndieGoGo crowdsourcing campaign well enough to finance the recording and mixing and here we are.

The fifteen-track album comes out of the gate with a bold, punchy rocker, throbbing bassline and ringing guitars, killer hook on chorus that sings out the “Blinding Light of Love.” They follow that with an acoustic sing-along “Uncle Watson Wants to Think,” where vocalist Tim Quirk is joined by Joan Osborne on harmony vocals in a folk-rock song that tracks like The Band, challenging toxic masculinity. “Pong,” a punchy run through the history of the members growing up years, where “Everyone’s invited/To join in on this song/All love’s unrequited/Every game is Pong,” a tribute to one of the earliest computer games and life’s futility. “Snow Day” recalls those great forced winter holidays, while “New Memories” tells the story of a romance based on the quality of the mattresses on the beds where they slept. “Flux Capacitor” is… you guessed, an ode to time travel technology from “Back to the Future.” “Not Being You” describes all the horrible people a person meets when they are not with the one they love, which leans on synthesizers to provide the fill over the danceable drumbeat, although they throw in a tasty guitar solo for sweetner.

Vocalist Quirk gets lot of great support from long-time TMJ stalwarts, Jay Blumenfield on guitars, Sandy Smallens on bass, Tommy Vinton on drums William Wittman plays guitars and keys, and he also handled the production duties. While many of these songs are good, good fun, Quirk turns serious here and there too. In “More Of The Stuff I Like” wishes the world would cooperate in giving us what we long for, like a vaccine against heartbreak. In “Something To Drink About,” he mourns the declining American ideals where people don’t want free speech for everyone and some flash white power signs while 40% of the country cheers, and Quirk sings “I’m ashamed that it happened here.” Elsewhere, “Tranq It Up” has more or those big bold guitar power chords, and toward the end, for those who need it, cowbell. The record closes with “Just Around the Bend,” another fun rocker that hopes against hope that things will get better in the future. And then after a couple minutes of silence, a secret 16th track, where Quirk & Co. have written lyrics that celebrate the IndieGoGo investors who paid the premium price, going the extra mile to honor their fans and share that joy with the rest of us.

Arriving just days after the Grammy TV extravaganza gave only a few passing nods to traditional and alternative rock, Too Much Joy comes to our rescue right on time. Forget ‘em, if they can’t take a joke.

Jay Gonzalez: Back To The Hive [Album Review]

1 thought on “Too Much Joy: Mistakes Were Made [Album Review]”