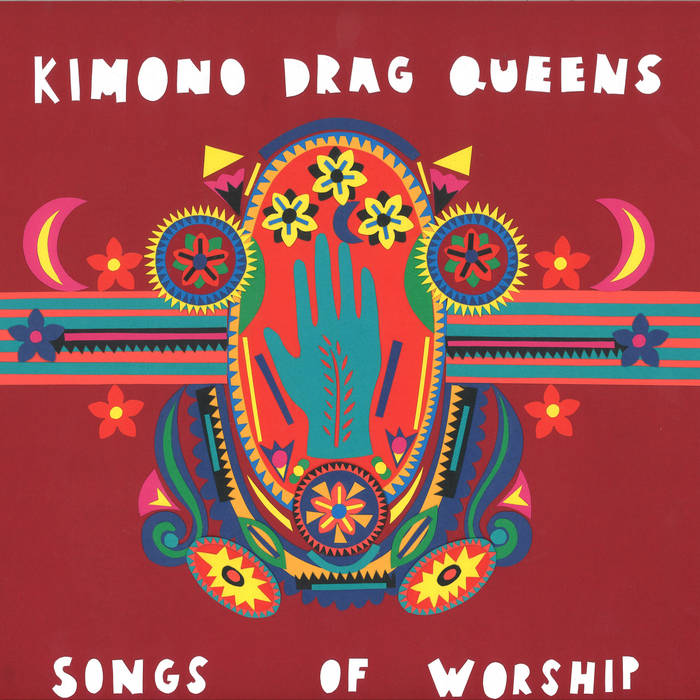 Since their formation in 2016, Sydney’s psych-rock band Kimono Drag Queens have released a string of singles, and have been slowly leading up to finally releasing their debut, Songs Of Worship. It’s taken the seven-piece two years to record but I believe it was worth the wait as Songs Of Worship is full of surprising turns, styles, and rhythms that are both memorable and impressive.

The title track kicks this record off and its first 3 minutes floats you along a psychedelic river with a slow and grooving pace that finds the band offering a harmonized tunnel sounding vocal that really sets the mood. It works and it is not necessarily a new psychadelic approach but then over the next several minutes the song ramps up and just jams making it a highlight. Hard drums, hard riffs and a feverish energy that will make you take notice. The track then quickly settles and fades away. It is this type of song arrangement that utilizes all of Kimono Drag Queens talents and pushes their songs to another level.

The band consistently moves in and out of the psych genre and ebbs and flows with their fuzzed out guitars and melodic vocals. At times they can come off lighthearted such as the upbeat foot tapping beginning to “Evil Desires” but then as the song progresses, Kimono Drag Queens transcend into a completely different animal as the track ends in a more explosive space prog rock conclusion. The band also changes things up with an undertone of funk in their music as many of their song structures have a rhythmic pulse that stick in your head.

With the 6 tracks having an average time being over 5 minutes, Kimono Drag Queens use every bit of the musical canvas to create the experience you hear on Songs Of Worship. The band has a much more straightforward sound than some of their peers which I liked as it drives consistency on this debut outing. The groups capability to push a song off slowly then quickly insert riffs that get your attention is a fantastic quality. “Wild Animals” is another example of this as their vocals set up an edgy intensity against the psych backdrop when they sing “It’s coming from the inside” and then they launch several killer hard riffs which develop into a wall of sound.

Songs Of Worship is an album that I recommend giving multiple spins. It has big rock out moments that immediately standout and truly put this Sydney band on the radar as a new act to watch!