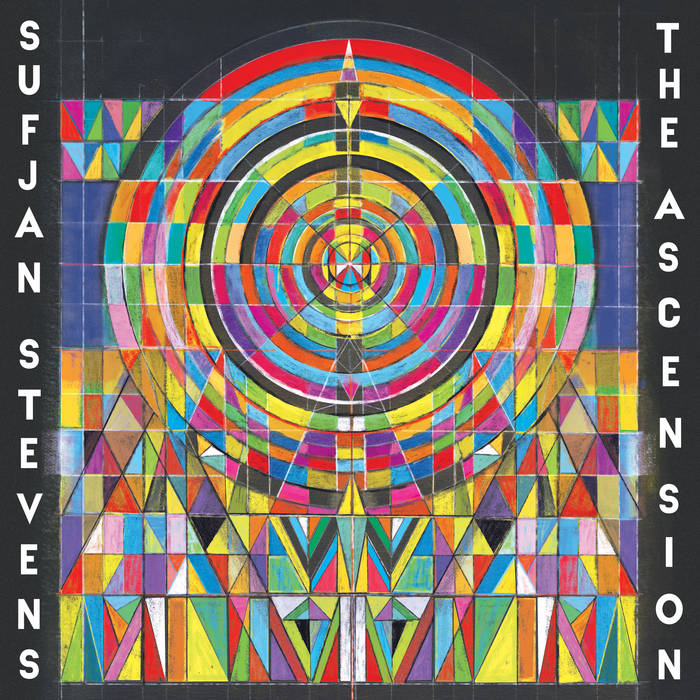 By now, fans of Sufjan Stevens have learned to approach each new project with an open mind. On his most successful effort to date, 2005’s Illinois, Stevens revealed the breadth of his musical interests, from indie folk to pop/rock all the way to showtunes with full orchestrations, and electronica. The Age of Adz (2010) turned full on toward Stevens’ more expansive electro-pop influences, while Carrie & Lowell (2015) saw him return to his indie folk roots for an intimate reflection on the death of his mother and then some. While on The Ascension, his 8th studio album, the artist has once again turned to electronic music, the textures and focus tends to be darker than on The Age of Adz, and as intricate and personal as anything Stevens has done previously.

There’s a tendency to view much of the electronic music made today through an EDM lens, where there’s often a catchy loop at the front end, but the tempo and progression of the track is focused largely on moving asses on the dance floor. Sufjan Stevens brings a much more focused sense of personal expression to his music, as if he’s playing his computer, synth keyboards and drum machines with the same delicate touch he has brought to songs played on his banjo. In fact, the opening tracks “Make Me an Offer I Cannot Refuse” and “Run Away With Me” nearly drip with a haunted sadness. While one can certainly hear two of the album’s early video/singles, “Video Game” and “Sugar,” as dance remixes and both include choreographed dance in the videos, both find the singer yearning for… something, whether it’s love, salvation, or connection. Yet he’s refusing to settle for the advertised bumper-sticker slogan, commercially designed, one-size-fits all production that everyone’s marketing. All that has failed him badly, and the singer/songwriter is hoping for something much more tangible and real, but not sure what that might be, what it even looks like.

There’s an ambivalence, an uncertainty that permeates the music, capturing this moment in time. “I’ve lost my faith in everything,” he sings in “Tell Me You Love Me,” to which he adds the telling phrase “anyway.” He wonders, “As the world turns, making such a mess/What’s the point of it when everything’s dispossessed?” The sense of longing for meaning may be deeply personal in the isolation of our current pandemic, or it may be all of us together, the whole nation of “America,” the album’s 12 and half minute closing number. With the anxiety of an uncertain apocalyptic expectation hanging over his head, Stevens appears to be caught waiting for that other shoe to drop, which comes through the entire album’s 15 tracks, but he hangs on the final prayer for someone, something, to please “don’t do to me what you did to America.”

Much as Stevens was mourning a personal loss and reckoning in Carrie & Lowell, there’s more at stake on The Ascension. He can imagine that all he wants from life is to “Die Happy,” the single refrain repeated ad nauseam in the song of that name, but while awaiting the promised rising of the title track, he morphs into doubt: “To think I was asking for reason/Explaining why everything’s a total mess… To think I was acting like a believer/When I was just angry and depressed.”

He’s got “Ativan” for that, but when “The Ascension” arrives, it “falls upon me.” Yet as much as “all my dreams have been confiscated,” as he sings in “Goodbye to All That,” that comes with moments of loneliness and desperation, Stevens must also celebrate as he does in “Landslide” the possibility of a “second chance,” the pleasant surprise when “We step in the light/The rise of our tide/My love is a wave/You got me caught in a landslide.”

That last one has one of the album’s only guitar solos, providing a joyful emotional lift courtesy of Casey Foubert, Steven’s only other collaborator here. This album is rich musically, Stevens’ elevates the electronic craft with artful attention to detail, capturing shifts in mood by changing up the rhythms, emitting noises that awaken the senses and clarify perceptions. Folk who remember DePeche Mode realize that electronica has emotional potential to capture both ups and downs but rarely have we heard a work as subtle and nuanced as what Stevens conjures throughout The Ascension. Whether it’s a hunger for consummation in the divine (“Ursa Major”), or the longing for physical love and connection that he’s pleading for when he sings “come on, Baby, gimme some sugar” (“Sugar”), his soundscape prove evocative and engaging. The Ascension is a lush musical banquet, mixing sweets and sours, melodic hooks that linger and scary soundscapes that cut deep. It’s an artful, anguished, self-aware depiction of modern life’s disparities, holding up a mirror to 2020, with a dance track thrown in for good measure.

The Mountain Goats – “Get Famous” [Video]