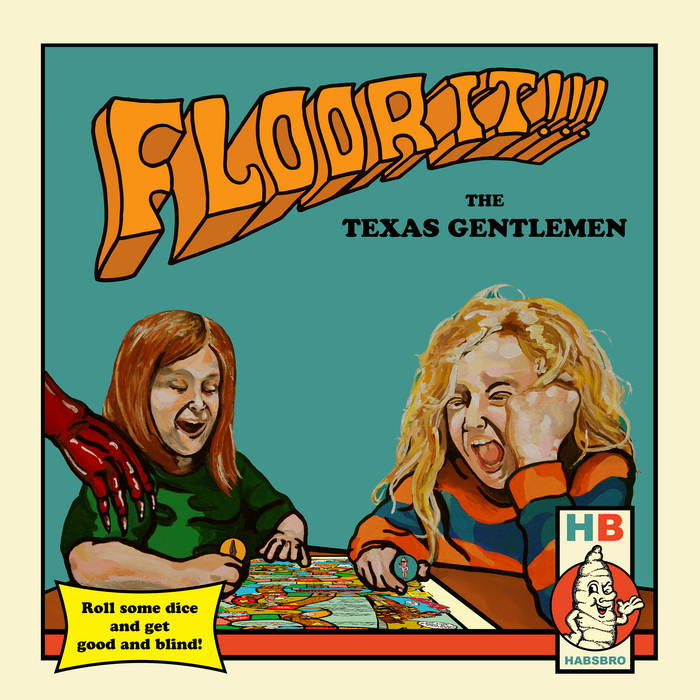 The first time I listened to The Texas Gentlemen’s newest release, Floor It!!!, I had a flashback to the summer of 1979. Something in the masterful instrumental prowess in the individual players and the band’s penchant for genre bending moves through funk, country swing, Dixieland jazz, and numerous iterations of pop and rock often in the course of one song was reminding me of the night I saw one of the most memorable concerts of my early years, catching the Dixie Dregs at a midnight show in some barn in the middle of farm country in Western New York. The Dregs were labeled a “jazz/rock fusion” band, because no label really fit, and we really didn’t call things “progressive rock” yet. Led by electric guitar virtuoso Steve Morse, they were fresh from two great albums, What If and Night of the Living Dregs, and with Alan Sloan on violin and Mark Parrish on keys they could also play classical and country with a flip of the switch, like the one on Morse’s Telecaster, which looked like he’d cut a big rectangle to squeeze as many different pickups as possible into the one instrument. I remember it because I stood on the floor just feet away from him on the small riser for that whole show. Morse went on the play briefly in Kansas, before signing on to replace Ritchie Blackmore in Deep Purple, and is part of the prog rock supergroup Flying Colors, with Neal Morse. So, listening to The Texas Gentlemen reminded me to download a couple classic Dregs albums, go back to re-listen to some Neal Morse, and check out Flying Colors, because great music often reminds you of other great music and musicians.

But, I’ll admit, coming in I didn’t expect all that Floor It!!! delivers. First they are called the Texas Gentlemen, so right away I was thinking country/Americana, which at first was confirmed with a glance at the bio that says these seasoned session players had toured backing the likes of George Strait, Kris Kristofferson, Joe Ely, Shakey Graves, Nikki Lane, and Leon Bridges. But the album opens with “Veal Cutlass,” a bit of New Orleans style jazz that feels right out of the 1930’s, following that with “Bare Maximum,” a funk instrumental driven by an impressive bassline from Scott Edgar Lee, Jr., and an organ and guitar sound borrowed from Booker T. and Steve Cropper of the MG’s. Follow that with “Ain’t Nothing New,” which feels like something from Steely Dan’s early poppier albums with a lush string orchestration, and you start to realize that not only are these guys influenced by some of the best music made (with notable focus on the 70’s), but they have the chops and smarts to do pretty much whatever strikes their fancy.

Such is the level of skill and craft in these Texas Gents, that their little cadre has been compared to some of the greatest collections of studio/support players in the history of modern pop music, like L.A.’s The Wrecking Crew, who worked on hits with the Beach Boys, Glen Campbell, Simon & Garfunkel, and the Mamas & the Papas, and Muscle Shoals studio’s house band The Swampers, who were behind some of the biggest records by Aretha Franklin, Wilson Pickett, Leon Russell, and The Staple Singers. By the way, The Texas Gentlemen recorded their 2017 debut album at Muscle Shoals studio in just one week. The Gents mix things up with plenty of singer/songwriter tracks as well, at times recalling Southern rock bands like Little Feat who mix soul, R&B and jam band leanings into their pop/rock approach on the track “Skyway Streetcar,” while “She Won’t” feels like a tip of the hat to The Band. Speaking of The Band, right in the middle of “Easy St.” which leans mostly toward the piano pop rock of Elton John, but adds a Southern country twist in the chorus, and three quarters of the way in, they toss in a quick tribute to Bob Dylan with a bridge that echoes a verse from “Blowin’ In the Wind.” And if you’re not already impressed by this quintet’s versatility and taste, check out the piano pop of “Hard Rd,” which sounds like Paul McCartney singing over a George Martin brass and string arrangement with more of those Steely Dan jazz influenced guitars tacked on for spice.

The joke about Nashville is that people there like both kinds of music, country & western. Well, while there’s some country influence here and there, these Texas Gents like all kinds of music, and their eclectic tastes find the band genre-bending and sound tasting from all the varieties on the smorgasbord. The musicians who make this happen include Daniel Creamer on keys and guitarist Nik Lee, who share lead vocals and harmonies. They are joined by guitarist Ryan Ake, bassist Scott Edgar Lee, Jr., and drummer Aaron Haynes, while the string and horn arrangements come courtesy of producer, David Pierce. You hear those big string orchestrations on “Last Call,” a tale of greed and lust for money and power. “Dark at the End of the Tunnel” is a jazz instrumental that would fit on an album by Weather Report, but midway through they offer up complex harmony runs out of the Return to Forever cookbook. Toward the end of the record, as if they haven’t already blown your mind, they stretch out even further on lengthy jams in “Charlie’s House” and the album’s title track, still mixing and matching with lots of honkytonk piano, while playing for keeps. The vinyl version comes with a drinking game board that resembles Chutes and Ladders, which suggests, once again that The Texas Gentlemen think of everything, while bringing all the best music to mind.