Sweeping Promises: Hunger For A Way Out [Album Review] 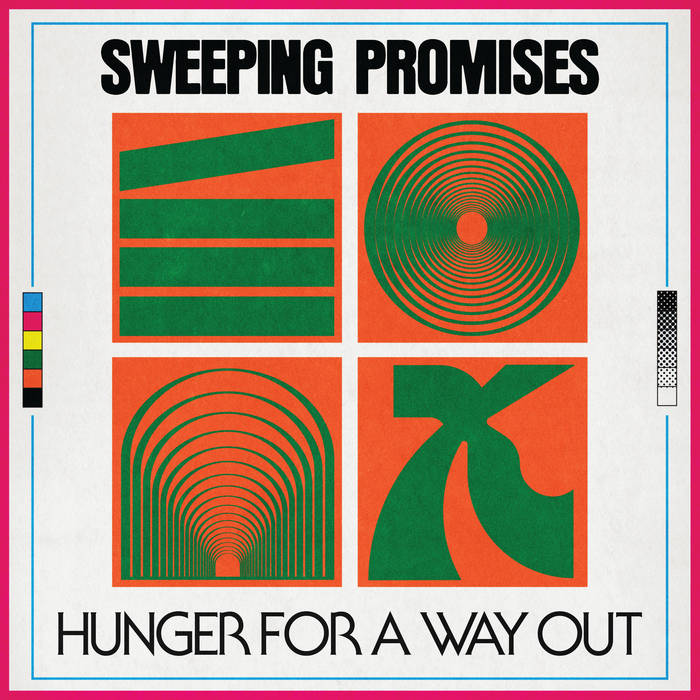 Sweeping Promises
Hunger For A Way Out
Feel It Records [2020]

Sometimes simplicity is the key to great music and what you actually don’t hear can sometimes be the highlight. That is exactly what the Boston post-punk unit Sweeping Promises delivers on their debut album Hunger For A Way Out. The groups’ swagger, controlled intensity and focused detail on the little things has the cup runneth over with fantastic memorable moments.

Sweeping Promises are led by Lira Mondal and her clear and powerful vocals is the first piece of success on Hunger For A Way Out as she is the conductor for the angular guitar, bass, drums, and sporadic keyboards. The “single mic technique” the band uses puts Mondal out front consistently but the album still has a full band vibe. At times, the group will have the snarl and bop of Elastica, while still falling back on classic Wire and LiLiPUT type arrangements. Each instrument gets its shine, like on the title track you have a groovy riff that then is overlayed with a hella catchy singular guitar line. Other places, like later album track “Atelier” finds Sweeping Promises killing it with a burning intro rhythm before Mondal slides her vocals in and completely captures your imagination. On “Cross Me Out” you get a full 6 second intro of Mondal breathing “haha haha” before the the full song takes off with the rest of its instruments. These little spectacular moments happen almost on every track and with the album running just 28 minutes the experience is perfectly rewarding.

Even with a quick running time, Hunger For A Way Out takes its time with each track. Nothing here feels rushed, nothing here seems out of place and most of all – Sweeping Promises transitions are seamless and effortless. The band has a undertone of dance new wave which simply makes your foot tap to each song but they stay so hidden in the depths you barely realize it when the riffs pulse and the guitar takes the high road. Mondal also shines bright because her voice rides each song wave for wave.

You never wear down from any of Sweeping Promises tracks and if you are like me – you will be wanting to hear more. Their debut is engaging and was a real surprise as I feel the group is still under the radar for sure. With great song writing, tense guitar play and modern rhythms, Sweeping Promises have created a debut that will not be leaving my playlist any time soon!