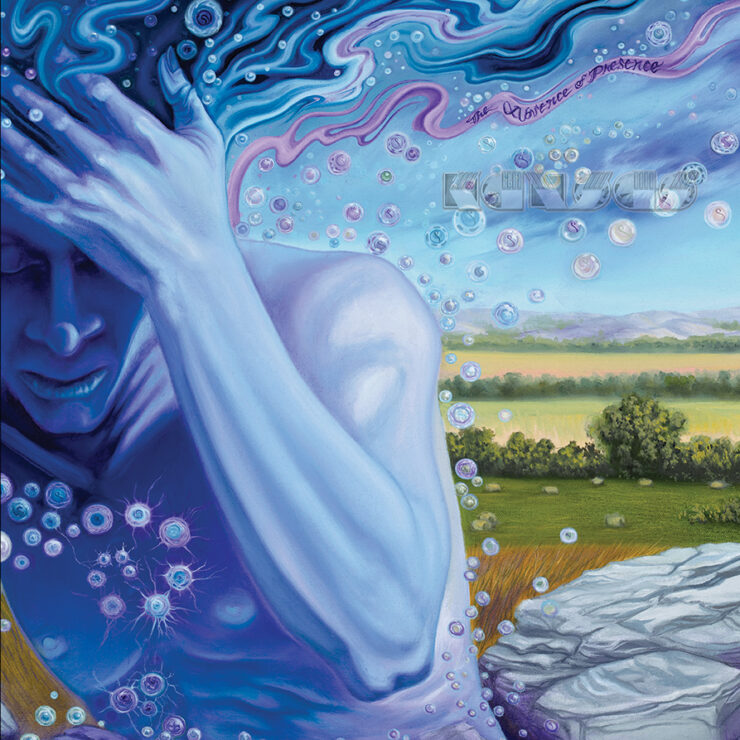 Kansas
The Absence Of Presence
Inside Out Music [2020]

It’s one thing to find the right musicians to fill in key slots in a classic band like Kansas so that you can reproduce their sound and recreate the hits for fans who’ve memorized every guitar solo, every nuance and riff in the band’s repertoire. While a band like Journey is now on their second lead vocalist filling in the large shoes left behind when Steve Perry retired but they were going to be fine as long as guitarist Neil Schon was in place, Kansas on the other hand has had to replace lead guitarist/composer Kerry Livgren, lead vocalist/keyboard player Steve Walsh, and violinist/co-lead vocalist Robby Steinhardt. Oh, and also bass player Dave Hope. The two remaining original players, drummer Phil Ehart and guitarist Rich Williams have done just that, as they proved on recent tours where the band played two of their most successful albums top to bottom, Leftoverture and Point of Know Return, in fact they played the two albums during one special performance at the Beacon Theater in New York City back in December of 2019.

In that regard the modern day has proven they are a successful cover band, albeit for one of the best-selling American prog rock bands of all time, in the 70’s comparable to European acts like Yes, Genesis, and Gentle Giant. But this current band has decided that it’s not enough to rest on the laurels of the original band hits, but has chosen to press on and make new music that carries the Kansas sound forward, while adding their own unique touches and flavors to a winning recipe. And thankfully, Williams and Ehart have found the right players to compose and play these new songs in a way that honors the foundational sounds produced by Livgren, Walsh and Steinhardt, in guitarist and producer Zak Rizvi, vocalist Ronnie Platt, newest addition Tom Brislin on keyboards, and David Ragsdale on violin, with long time bass player Billy Greer rounding out the 7-piece band.

The challenge here is to produce a sound that honors and celebrates the sounds and textures of Kansas’ unique imprint, but to not get trapped into mere imitative repetition. Smartly, Rizvi, Williams and Ehart have struck a potent balance between honoring the past and allowing the talents of the current band to shine through these new compositions, especially on the album’s early songs written by Rizvi, the title track, “Throwing Mountains,” and “Jets Overhead.” In the Absence of Presence we hear all the key elements vibrant violin melodies, the smart use of dynamics mixing loud and soft sections, harmony vocal leads, that majestic orchestral build, and then those crunchy instrumental solos so often traded between Livgren’s guitar and Walsh’s Hammond organ that both Rizvi and Brislin pull off here to great satisfaction, while putting their on spin on a winning combination. Ragsdale gets a similar shot in the spotlight, playing a frenetic violin solo in “Jets Overhead.” Rizvi, to his credit, writes sections that follow Livgren’s established patterns, but his own playing brings a bit of Rush’s Alex Lifeson or maybe Steve Vai into his soloing style. Importantly it works.

Brislin’s compositions vary in strengths, from the piano pop ballad “Memories Down the Line” which Rizvi attempts to elevate with a moving double lead with Ragsdale’s violin, while the lively rock on “The Song the River Sang” gives Ehart room to explode off the drum riser with a more propulsive rhythm section, while Rizvi, Williams, and Ragsdale trade licks to bring the song to its climax. At this point in the life of this classic band, it would take a massive spark of genius to outshine the majestic early works of albums like Masque or Song for America to say nothing on their radio hits like “Carry On Wayward Son” and “Dust In the Wind.” But this current iteration of Kansas has delivered a solid modern-day expression of these classic sounds, extending their longevity, and added some strong new material to the catalog. Few others have managed such a delicate feat as well as this.

1 thought on “Kansas: The Absence Of Presence [Album Review]”