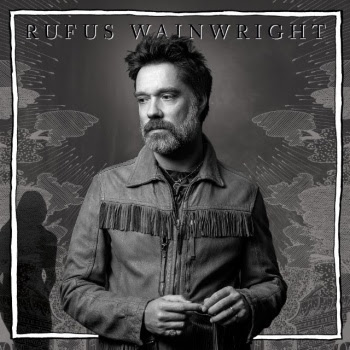 Somehow, even when Rufus Wainwright was getting a lot of buzz for the sophisticated sound on his self-titled debut (’98) and his sophomore outing, Poses, he felt like an old soul, someone who’s idea of pop music came from Cole Porter’s prestigious catalog in the 1930’s, and prone to quoting lines from the plays of Oscar Wilde. And while he’s the son of folk music royalty, having Loudon Wainwright III and Kate McGarricle for parents, it seemed quite natural that his 2015 album, Prima Donna was a two-disc recording of his opera, which was followed by an album that adapted 9 of Shakepeare’s sonnets, titled Take All My Loves (’16). Yet for Unfollow The Rules, Wainwright has returned to the pop music of his earliest breakout works, supported by producer Mitchell Froom, who’s worked with Randy Newman, Ron Sexsmith, Sheryl Crow and Los Lobos, and a host of solid studio players and orchestra.

Wainwright’s strength as a vocalist is obvious, and his compositions tend to favor his melodic sensibilities, which are on full display throughout, but get special attention in the long vamp vocalizations in “Early Morning Madness,” as the orchestra lurches into chaos, only to pull pack at the last moment. Often the production is big, lush, very full, building to climaxes, but in the humorous NYC pseudo-country romp of “You Ain’t Big” he reins in everything in a song that suggests that you can be hot stuff in the 5 boroughs, but not really a star if “you’re little in Texas.” Wainwright’s literate lyrics, which speaks of Greek god Hercules in the album’s title track as an example, is something he’s willing to make fun of, as he does in the self-deprecating, yet self-referential “Romantical Man.” Part of the joke is the lyric “pedantic/If you gotta look it up, the definition/wish I was being sarcastic/but I’m feeling it/like every second,” while of course, someone who’s pedantic, so you don’t have to look it up, is someone who shows off by parading their knowledge in front of others.

Of course, being by nature a romantical man, Wainwright continues to address his usual themes of love, longed for and at times unrequited, celebrating “Only The People Who Love,” the ones who will always suspect that there’s inevitably “Trouble In Paradise,” the album’s first single, and the one with the strongest backbeat. But even with his tongue in his cheek, Wainwright often uncovers suspected truths, as in “This One’s For The Ladies (That Lunge),” a twist on the ladies that lunch of course, but makes the point that these very women long for a world where they are taken seriously. In the brief “My Little You,” he appears to be singing to his daughter with Lorca Cohen (Leonard’s daughter), stating simply to “Don’t let anybody out here/Tell you what you gotta do here.”

Wainwright’s musical vision tends to move toward the epic, whether describing the romantic harmony he’s feeling with his husband on a “Peaceful Afternoon,” or exercising his inner “Devils and angels,” in the operatic sounding “Hatred.” But thankfully, he’s naturally drawn to accessible, inspiring melodies and has the honey-sweet vocal abilities to swim above the beds of vocal harmonies that he cannot resist. I’m sure his opera is similarly beautiful, but it’s quite nice to have Rufus back in the pop music world of Unfollow The Rules.

Illuminati Hotties: FREE I.H: This Is Not The One You’ve Been Waiting For [Album Review]