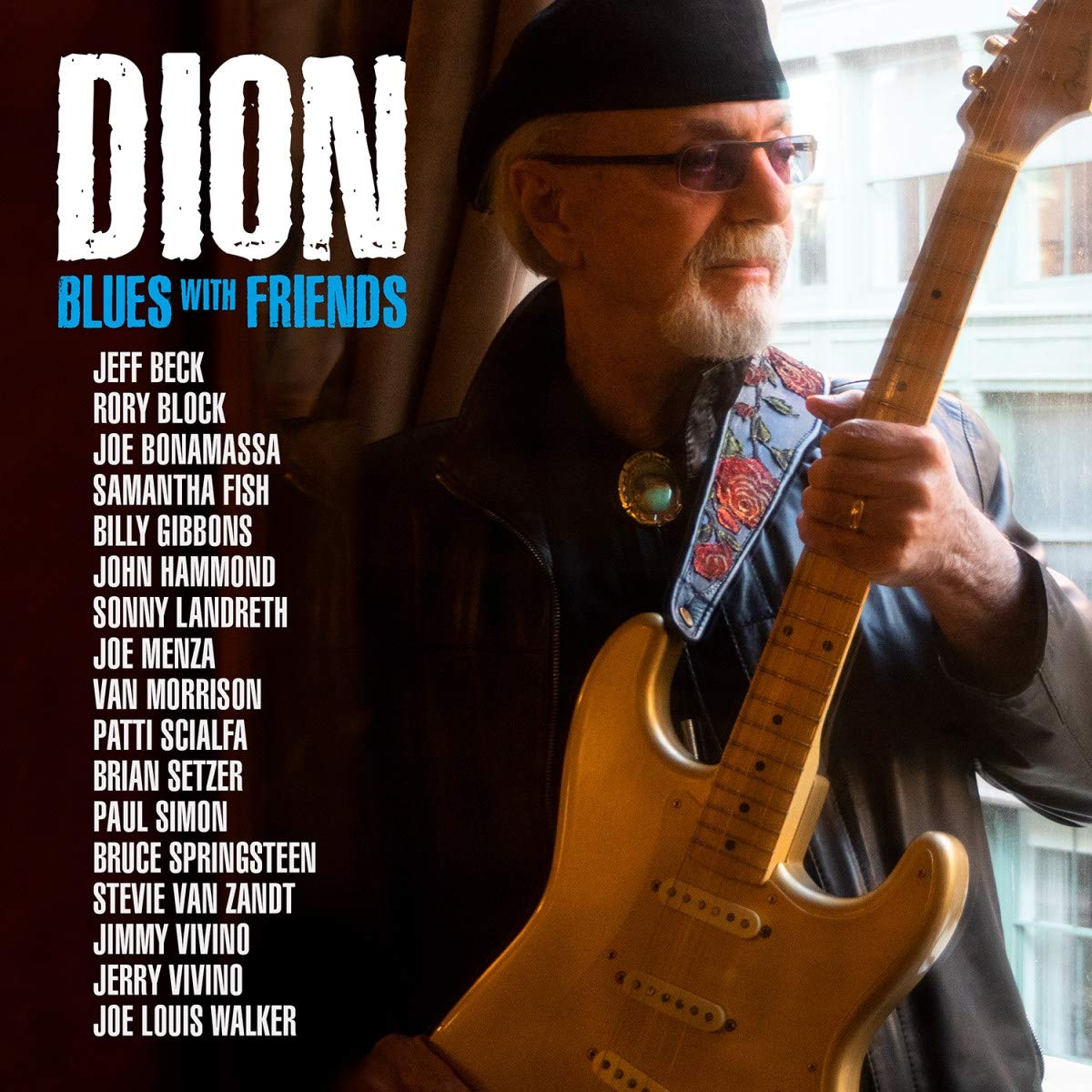 There are different levels of fame. There’s “one hit wonder” famous, and “once upon a time” famous, where you are remembered for your hits, and people flock around to remember when they were young. There’s that level of fame where the whole world knows you by just your first name, you know, Elvis, Bono, Cher, Madonna. Then, there’s that level of famous where you’re so beloved that you can invite a whole bunch of other famous people to come collaborate with you on a project, and they all show up; people like Jeff Beck, Van Morrison, Paul Simon, Bruce Springsteen and his wife Patti Scialfa to name a few. Dion is both of those last two kinds of famous. He had his first hits with Dion and the Belmonts in the late 1950’s. In 1989 when Lou Reed inducted him into the Rock and Roll Hall of Fame, Lou said, “Then there was Dion – whose voice was unlike any other I had heard before – a voice that stood on its own, remarkable and unmistakably from New York, Bronx soul.”

Well, at 80 years of age, Dion’s voice is still strong, still remarkable and unmistakably an expression of New York soul, and on the 14 brand new songs of Blues With Friends, he displays the class, wit, and charm that attracts a bunch of great musical friends to come out and help him bring these songs to life. For history buffs, it’s a wonder to recall that Dion and the Belmonts early doo-wop teen idol hits, “I Wonder,” “No One Knows,” and “Don’t Pity Me,” landed him on “The Winter Dance Party” tour with Buddy Holly, Ritchie Valens, and the Big Bopper, and Dion had turned down the chance to join them on the charter plane that crashed and ended their lives. Dion had recorded standard teenie-bopper fare like “A Teenager in Love” and “Lonely Teenager,” but he’s best remembered for classic rock and roll singles like “Runaway Sue,” and “The Wanderer.”

Over the decades, Dion has continued to record, included a period in the early 80’s when he recorded for a contemporary Christian music label, but in the 2000’s he’s turned his attention back to his earliest roots, the blues. In his latest bio, Dion assures that “blues have been at the heart of my music since the early 1960s. ‘The Wanderer’ was a twelve-bar blues and I was covering Willie Dixon and Jimmy Reed in my early years.” On “Blues With Friends,” Dion stays true to form with the aid of producer Wayne Hood, coming up with the basic music and words for all the tracks, co-writing 12 of them with Mike Aquilina, but of course a lot of the excitement here is Dion’s collaborations with a host of great guitar talents.

All of Dion’s “Friends” sound like they really brought something of their unique sound to these proceedings. Jeff Beck’s classic Strat sound is in lovely form on the country blues of “Can’t Start Over Again,” a tribute to Memphis. Dion is joined by a peer, John Hammond Jr. on two tracks, playing harmonica on “Baby Likes to Boogie” and then on old school acoustic slide for “Told You Once in August,” which also includes Rory Block, who also plays acoustic slide and adds her soulful vocals. It’s funny, can’t say I expect someone old enough to be my father to be singing about how his “baby likes to boogie,” but Dion’s authentic presence dissolves away all the cringe-worthiness you might associate with the word. Hell, he sings “Bam Bang Boom,” with ZZ Top guitarist Billy Gibbons,” and it actually sounds hip… he’s just that cool.

There’s plenty of great playing here all around. Sonny Landreth lays down some stellar slide on the funky, “I Got the Cure.” Stray Cat Brian Setzer brings all his rockabilly might to “Uptown Number 7.” Joe Bonamassa, Samantha Fish, Joe Menza show up to lift the basic blues progressions to the next level with superior guitar chops, while Jimmy & Jerry Vivino add sax to “Stumbling Blues.” The E Streeters are amply represented with Little Steven Van Zandt stepping in for some grungy soloing on “Way Down (I Won’t Cry No More),” and then when Dion ask Patti Scialfa to add her soaring soprano over the reinvention of his Gospel-era “Hymn To Him,” her husband steps in for a guitar solo. Van Morrison shows up to trade vocals with Dion in a very special pairing for “I Got Nothin’”, with Joe Louis Walker playing the smoking guitar solo.

While most of Dion’s lyrics are solid, echoing traditional blues themes of loss and redemption, the lyric for “Song For Sam Cooke (Here In America)” digs a little deeper, offering up a very personal take on race relations in our troubled country. The inspiration comes from a story Dion retold in his memoir about walking the southern streets while on tour with African American soul singer Sam Cooke. It describes how they had two very different experiences not unlike those depicted in the movie, “Green Book.” “I never thought about the color of your skin, I never worried about the hotel I was in, here in America, but the places I could stay, they all made you walk away, in America.” Cooke may have been a star on the musical stage in any theater, but “that won you nothing on a city street at night, here in America.” Dion is joined on vocals by Paul Simon, and they are accompanied by a lovely violin, it’s a timely anthem made all the more poignant by current events.

Fifteen years ago, also at 80, the late great King of the Blues, B.B. King made a tribute album with a bunch of his “Friends,” including Van Morrison and Billy Gibbons. This may just be something 80-year-old artists do, but it’s fun to see Dion get a similar star turn, with an important difference being this teenie-bopper turned blues singer didn’t take the easy route of reliving his greatest hits. He’s built on an already impressive career, and yes, even at this late date, has raised the bar by delivering a new collection of solid songs. Lou Reed is usually right, in my opinion, and he certainly got Dion… he has a voice that stands on its own, consistently remarkable and, yes, still unmistakably from New York. True blues, full of Bronx soul.

Key Tracks: “Song For Sam Cooke (Here In America)” with Paul Simon / “Can’t Start All Over” with Jeff Beck / “I Got the Cure” with Sonny Landreth