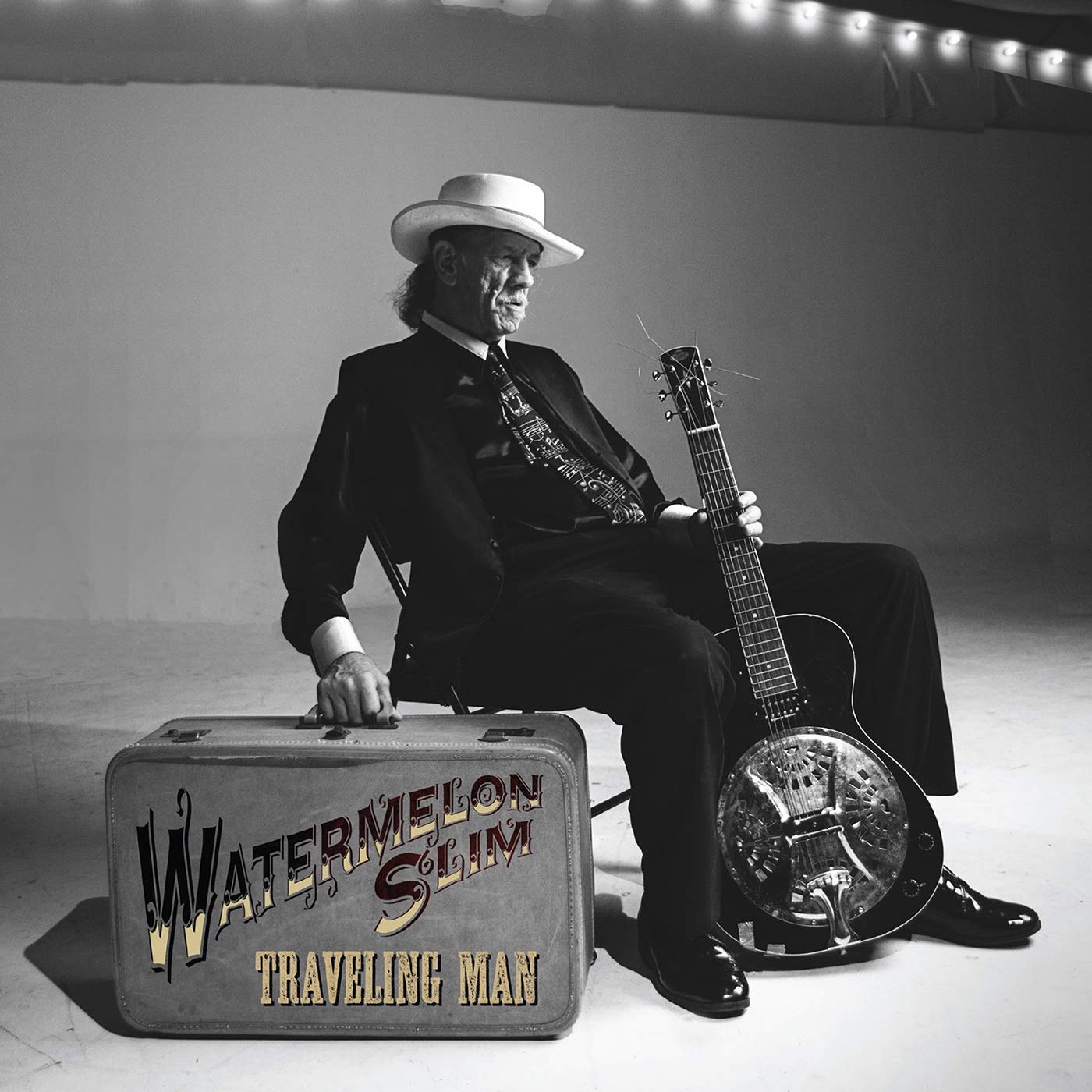 Watermelon Slim, originally born as William P. Homans III, has come to his career in blues music by a unique path, which explains the nearly 30 years between his first recorded work and his next. A Vietnam vet, Homans tried farming, made a living as a truck driver, earned a Master’s Degree in history at Oklahoma State University, and in 2005 he was nominated for a prestigious W.C. Handy Award for Best New Artist Debut. At 70 years old, he’s releasing his 13th album on the NorthernBlues label, a double CD of two live concert recordings of solo performances in Oklahoma blues clubs back in 2016.

Slim plays his dobro guitar on his lap, left-handed and backwards with a slide, in what is often called the Mississippi Delta style, and sings with a deep road-worn baritone that serves his songs perfectly. The first disc, recorded in Oklahoma City at The Blue Door, features four original songs about Slim’s trucking experiences, “Blue Freightliner,” “Truck Driving Songs,” “Scalemaster Blues,” and “Highway Blues.” The longest track, coming it at 11 minutes, is cover of two Howlin’ Wolf classics, “Smokestack Lightning” and “Two Trains Running,” although Slim remembers he heard the first song on an album by The Yardbirds. He does a couple songs that aim at everyone’s final challenge, death, “The Last Blues” and “Holler #4,” acknowledging a heart attack, but both songs celebrate his intention to “sing the blues,” which “ain’t nothin’ but a holler, ain’t nothin’ but a moan.”

One obvious thing, Watermelon Slim plays the hell out of lap steel guitar, and while he remains true to the traditional blues formula, his performances prove a seasoned performer can hold their own on a solo stage, entertaining the crowd with fun, songs of human struggle and toil, great musicianship, and a modicum of soul. Slim pulls out a harmonica for “Jimmy Bell” and turns out he’s as agile on the mouth harp as he is the dobro slide.

The second disc, is another 7 songs spread over a set just under 35 minutes, recorded in Norman, Oklahoma at The Depot. The highlight here is a cover of a blues standard, “John Henry,” which likely he learned from the work of one of his greatest influences Mississippi Fred McDowell, but one version or the other has been covered by the likes of Leadbelly, Mississippi John Hurt, Woody Gutherie and Johnny Cash. In “Archetypal Blues,” Slim displays some great fast picking, shows off a bit of his education, and gives shout outs to blues greats Robert Johnson, Muddy Waters, McDowell, Jr. Wells, and a host of others, celebrating them as his inspiration. In “Oklahoma Blues,” Slim honors his adopted state, recalling writing the song on his porch 30 years earlier. “Devil’s Cadillac” tells his own version of the story behind the landmark Crossroads, and in “Dark Genius” he sings his of his own unique insight, reminding us that braggadocio has long been a blues’ staple.

Not everyone loves this original American roots music, but if you’ve lived long enough you’ve been acquainted at one time or another with the emotional territory that gave birth to this music. And if you’ve known these deep blue feelings, then the music makes more and more sense. And if you’re looking for a credible modern take on this rich, deep musical form, you could do a lot worse than Watermelon Slim.