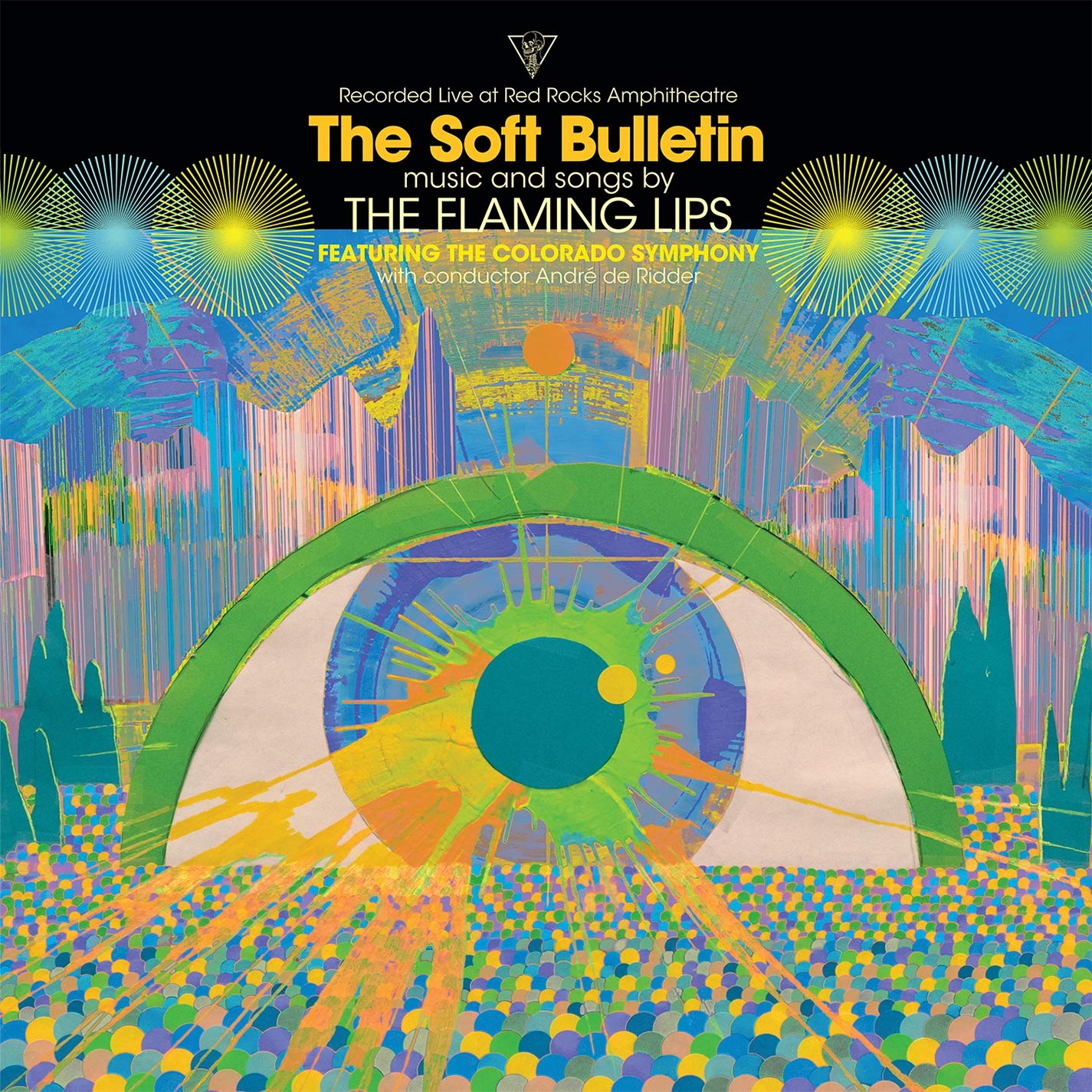 Fire Note Says: The Flaming Lips join together with the Colorado Symphony to recreate their 1999 masterpiece “The Soft Bulletin” at the landmark Red Rocks Amphitheatre.
Album Review: Back in 2016, somebody had the smarts to imagine a 20th anniversary celebration of Oklahoma City’s Flaming Lips’ breakout 1999 release, The Soft Bulletin, complete with a live album recorded at the picturesque Red Rocks Amphitheatre in Colorado, with the Colorado Symphony Orchestra and Chorus filling in for the synthesizer generated orchestrations on the original recording. While the Lips’ have released several live concert DVDs (my favorite being 2007’s U.F.O.S at the Zoo because it captures the same show that I got to take my 9-old-son to where we wore Santa suits and danced and jumped around on stage beside the band, and had a laser flashlight battle with the alien vixens from space on the other side of the band at a key moment in the show), and have full concerts available to view on youtube, until now they’ve never released a live concert audio album. So, they went all out on this one.
Prior to the release of The Soft Bulletin, The Flaming Lips were viewed as primarily a guitar driven punk band, albeit with quirky lyrics, and the band’s previous album, Zaireeka, was an experimental effort on four discs intended to be played simultaneously on four different stereos. The band’s one “alternative” radio hit was the funny “She Don’t Use Jelly,” for 1993’s Transmissions from the Satellite Heart, which opened doors for an opening slot on the summer tour opening for Stone Temple Pilots and The Butthole Surfers, and then headlining the side-stage for Lollapalooza’s tour the following summer. On The Soft Bulletin, producer Dave Fridman assisted singer Wayne Coyne, and multi-instrumentalists Steven Drozd and Michael Ivins create a more symphonic sound with synthesizers and studio techniques, in a way that emphasized the songs’ melodies, and more subtle artistic nuances. The result was a more accessible, and thus successful sound, with the album making many “best of” the year lists, and was eventually judged by Pitchfork to be #3 in their list of the top hundred albums of the decade.
The task of creating the orchestra arrangements and charts to add full orchestration to the Lips’ music that had previously been forced to rely on synths and various keyboards fell to Denver musician, Tom Hagerman, whose band DeVotchKa had recorded a live album with the Colorado Symphony back in 2012. In many ways, Hagerman has merely fleshed out what the original recordings had attempted to accomplish, merely writing parts for the violins and other strings or horns to sync up with what we’ve heard before. But there are some fun additions, like the playful bursts of percussion, horns and tuba’s in “The Spiderbite Song,” and Coyne invites the audience members to make the loud bug noise of their preference along with members of the orchestra for “Buggin’.” But there’s little doubt that there’s altogether more going on musically here than on the originals, whether it’s the additional sonic energy of all those extra musicians added drama and depth to the overall sound, while at times the 50-voice choir adds an operatic feel to Coyne’s vocal melodies, especially notable on the opening of “The Gash” and the nearly 8-minute “Feeling Yourself Disintegrate.” And many of the tracks are several minutes longer, as the orchestra builds and the arrangements grow.
Here, familiarity is a plus. We know these songs, and they are played front to back just like the original album, so the only real surprises are how nice it is to have a full orchestra playing all these parts live. Thankfully, lead vocalist Coyne, who has a tendency on the road for his voice to go hoarse, he’s in as strong a voice as we’ve heard from him of late for this recording. His live version of the alt rock radio piano ballad, “Waitin’ for a Superman” sounds even better than the original. Coyne is still supported by Drozd and Ivins, but in recent years have relied on a larger ensemble, including Derek Brown on guitars and keys, Jake Ingalls on keys and guitars, and both Nick Ley and Matt Duckworth Kirksey on drums. Together here, Flaming Lips and Colorado Symphony have come together around this common purpose, and for all the formality of a traditional orchestra, Coyne & Co., have maintained their unique quirky style and kept their reputation for trademarked weirdness intact.
The Flaming Lips Review History: King’s Mouth: Music And Songs (2019) / Oczy Mlody (2017) / With A Little Help From My Fwends (2014) / Peace Sword EP (2013) / The Terror (2013)
Key Tracks: “Waitin’ for a Superman” / “Race for the Prize” / “The Spark That Bled”
Artists With Similar Fire: Jeff Lynne’s ELO / Violent Femmes / Beck
The Flaming Lips Website
The Flaming Lips Facebook
Warner Records
– Reviewed by Brian Q. Newcomb