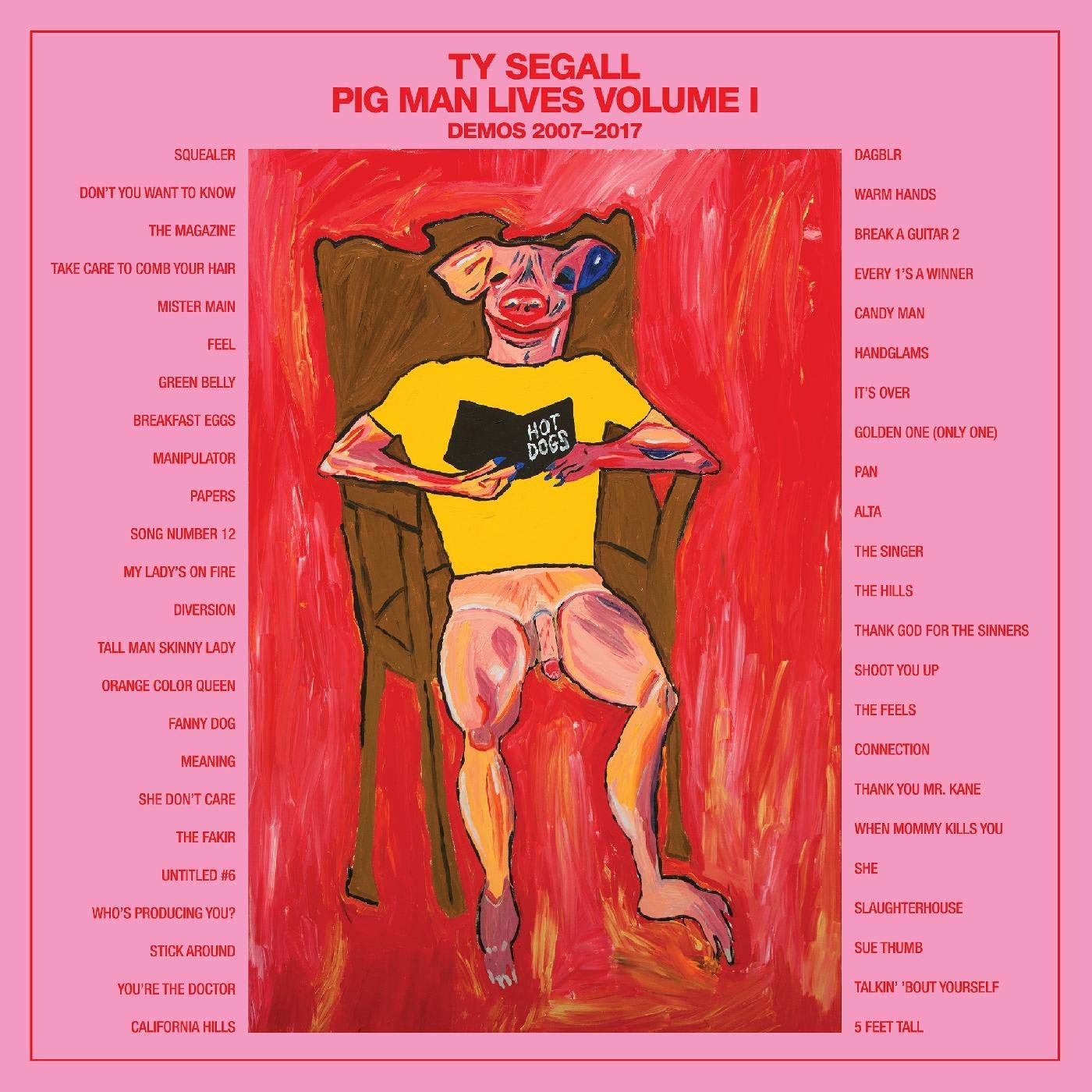 TFN Album Review: Ty Segall has been consistently releasing his style of garage indie rock music since 2007. Pig Man Lives Volume I is his new 4 LP vinyl only release compilation that captures his demos that span from 2007-2017. For fans, this is an oasis of music that captures 47 Ty Segall songs that plays much like a greatest hits album. It also is the perfect snapshot of an artist that is not flashy and is all about the music. The box is simple with its interesting Ty Segall front cover art, black vinyl, economic price, plain all black inner sleeves, simple vinyl labels and no other inserts or track information is included with the set. Ty leaves you on your own with the music!
Pig Man comes at you like a greatest hits box set because there is not much filler on this compilation as just about every track here could have been the final form. If you really enjoy early Ty recordings, Pig Man is full of that raw early sound that exploded out of those first albums. I also like that the track list does not run chronologically, so you get different combination of tracks compared to their album order such as “Orange Color Queen” from Ty Segall next to “Fanny Dog” on Freedom’s Goblin or Twins, “You’re The Doctor” followed by Emotional Mugger’s “California Hills.” These different combinations give the tracks a new context in 2019.
With all these more familiar album tracks you also get a few outliers from other releases like a version of “Pan” from the 2017 EP Sentimental Goblin and “The Fakir” which was the B-side of the Feel single from 2014. Pig Man also offers unreleased tracks which is something that is expected with this sort of release. “Untitled #6” is one of these included “new” tracks that truly feels like a demo as it is an instrumental playground with its keyboard and beat. “DAGBLR” is another unreleased song and is plays really low and muffled with its lyrics being buried as the mid-tempo instruments engulf it and try to drown the vocals completely. Neither one of these songs are essential to your Ty catalog but they help spotlight how his process is all inclusive. Some songs have slightly different titles here than their album counterpart or in the case of “Song Number 12” it represents a less rock version of “Freedom” from Ty’s 2017 self-titled record.
Each track on Pig Man offers something new even if you know the original like it’s your favorite Ty Segall track. “Don’t You Want To Know” from Manipulator has a new desperation in its softer delivery while pulling some of the big rock moments out of Freedom’s Goblin “My Lady’s On Fire” gives it a much more intimate impact that may be better than the final version. Manipulator’s “Tall Man Skinny Lady” shows that even though this is a more sketch of the final version with its hard strumming acoustic guitar and quieter drum beat, the end result didn’t end up too far off from this take. Overall, Pig Man Lives Volume I is a great collection of Ty Segall songs that rewards you every time you get up and flip the side. The collection shows some insight into Ty’s process and clearly highlights how good of songwriter he is because the tracks are winners no matter what the arrangement may be. We already can’t wait for Volume II!
Ty Segall Review History: First Taste (2019); Deforming Lobes (2019); Fudge Sandwich (2018); Fried Shallots EP (2017); Freedom’s Goblin (2018); Ty Segall (2017); Emotional Mugger (2016); Ty Rex (2015); Mr. Face EP (2015); Live In San Francisco (2015); $ingle$ 2 (2014); Manipulator (2014); Gemini (2013); Sleeper (2013); Twins (2012)
Other Ty Segall Projects Review History: The C.I.A.: The C.I.A. (2018); GØGGS: Pre-Strike Sweep (2018); Joy (w/ White Fence) (2018); GØGGS: GØGGS (2016); FUZZ: II (2015); Reverse Shark Attack (w/ Mikal Cronin) (2013); FUZZ: FUZZ (2013); The Traditional Fools: The Traditional Fools (2013)
Ty Segall Website
Ty Segall Facebook
Drag City Records
– Reviewed by Christopher Anthony

Nada Surf – “Something I Should Do” [Video]