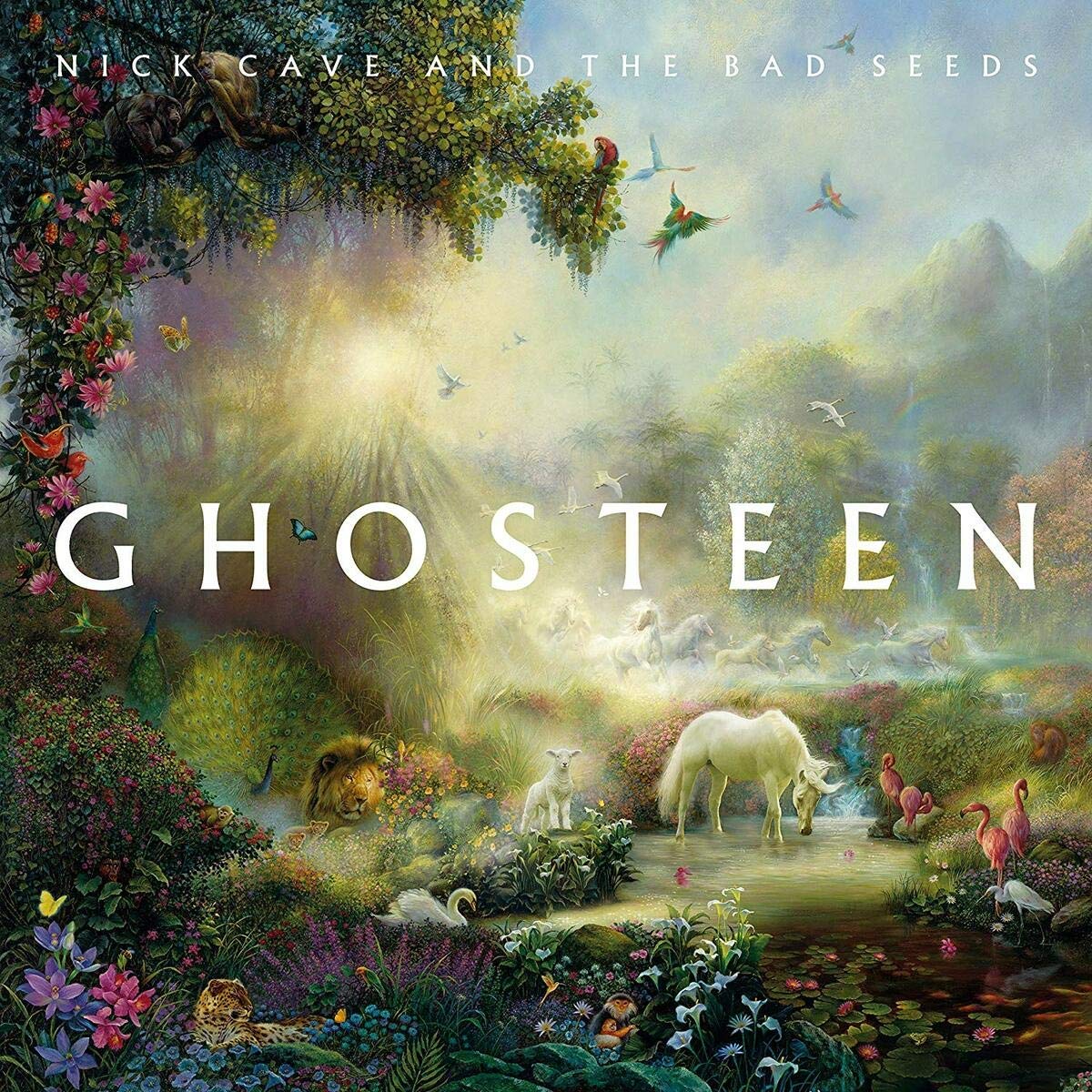 Album Review: Even though we’d been told that the 2016 release from Nick Cave And the Bad Seeds, Skeleton Tree, had been written before the tragic death of his 15-year-old son, Arthur, the album’s stark, grief-stricken music and Cave’s emotional rendering of the song’s lyrics, adding the occasional reference to his son, felt more like a death dirge than a piece of pop music. Cave claims that Ghosteen is the third part of a trilogy that began with 2013’s Push the Sky Away, and there’s little doubt that the double disc album is a further meditation on the meaning of life and love, made all the more real in the face of death, loss, and the grief that lingers long after one’s beloved is laid to rest.
Like Skeleton Tree, the first disc contains 8 songs, which Cave has described as “the children,” the second disc the “parents,” are two long musical pieces, and the spoken word “Fireflies,” a poetic expression of existentialism, drawing imagery from the “Pieta,” the portrait of Mary the mother of Jesus holding her crucified son, and “fireflies trapped in a jar” to speak of those things that connect us, and those that separate us. Elsewhere Cave mixes his metaphors drawing on fables and fantasy (“Bright Horses”) then returning to images from the commonplace, everyday events, like a family checking in to a hotel room on holiday (“Night Raid”). As anyone familiar with grief can tell you, the journey is far from straight, reasonable and rational, it takes a circuitous path through one’s consciousness, surprising one around each corner and change of direction, and Cave let’s his lyrics capture that as he seeks to make sense of it, for himself and his grieving wife.
Musically, again, Cave and his Bad Seeds musical director, Warren Ellis, have kept things very stark, piano ballads shrouded in hanging synths, ambient choirs, orchestrated strings, an lush atmospherics. You can hear the rest of the band here and there in the drums and bass, the rattle and swell of feedback, but once again this potent, and often aggressive group of rockers has played down their more potent side in favor of Cave’s vision and experience.
There’s real beauty present throughout these somber reflections, both in the musical settings and the imagery of Cave’s lyrics. Often his images are fresh, and colorful, but on “Leviathan,” which closes out side one, he reanimates the raw intensity of emotion from what would on the surface feel like a redundant cliché: “I love my baby, and my baby loves me.” Elsewhere he shares the hard won wisdom of experience, “there’s nothing wrong with loving things you cannot hold in your hand (“Ghosteen”).
One thing that’s apparent to anyone willing to notice, grief is inevitable to any and all who are willing to love. Whether it comes at the end of a long life of loving commitment (think Jason Isbell’s “If We Were Vampires”), or in a tragic loss like Cave’s son, Arthur. At the end of “Hollywood,” Cave sings of story of a Buddhist woman’s loss of her own child, in a high, haunting falsetto. In the story, the woman is told to gather a living seed from every house of her neighbors which has not been touched by death, but soon learns that death has touched each family, each home, that it’s a thing we all have in common. There’s a sadness about that fact, as well as a comfort, and Nick Cave’s Ghosteen, plumbs the depth of those deep, undeniable feelings, capturing moments of clarity, beauty and soulfulness amid the brokenness and chaos of daily existence.
Key Tracks: “Waiting For You” / “Bright Horses” / “Sun Forest”
Artists With Similar Fire: Leonard Cohen / 16 Horsepower / David Bowie
Nick Cave Review History: Skeleton Key (2016); Push The Sky Away (2013)
Nick Cave Website
Nick Cave Facebook
– Reviewed by Brian Q. Newcomb

Wolf Parade – “Against The Day” [Video]