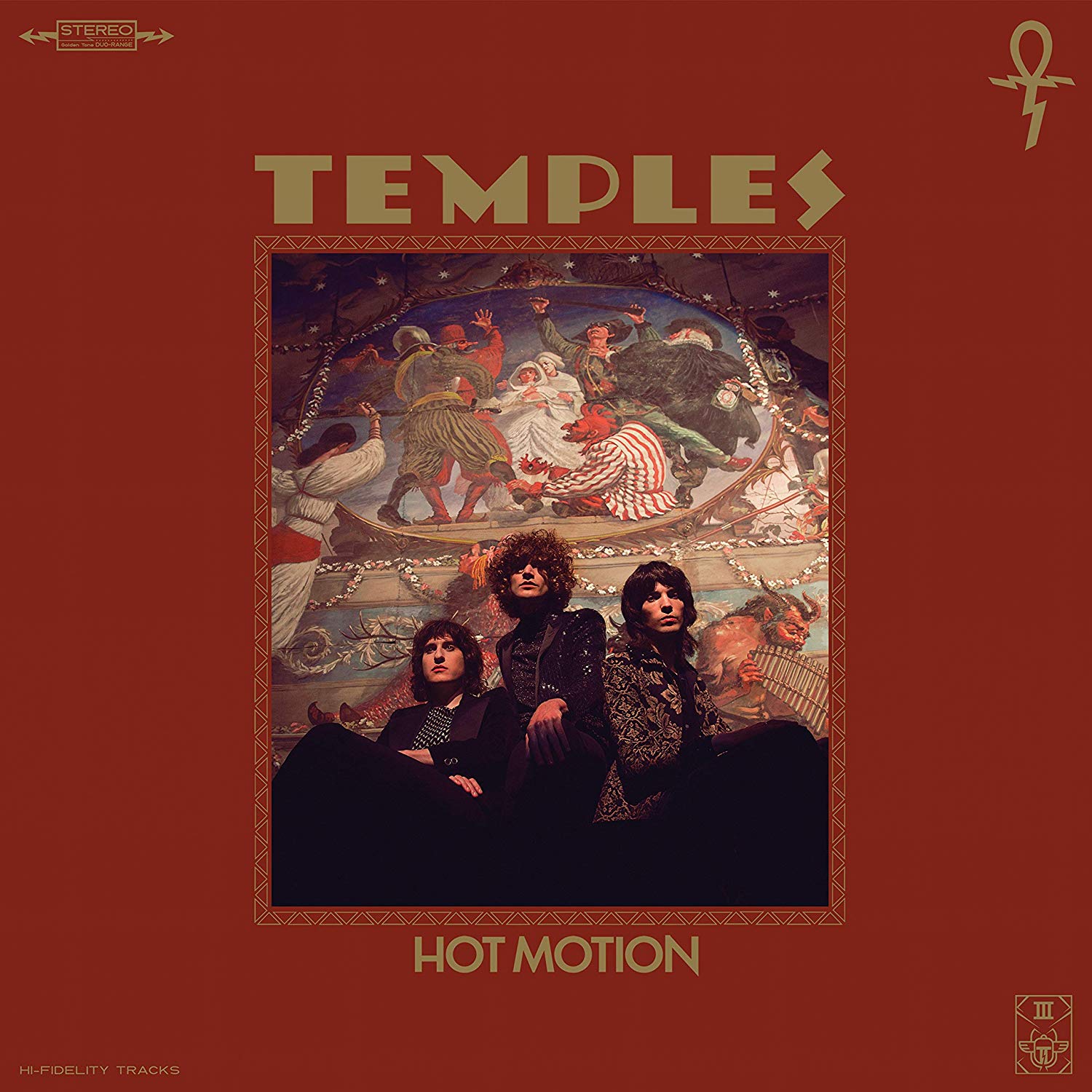 Fire Note Says: Neo-psychedelic British band, Temples is back with their third album, bringing more of their mix of pop song melodicism with just enough colorful progressive instrumental moves to keep everyone on their toes.
Album Review: The advance materials for the Kettering, Northhampshire, England band Temples’ third album release suggests that the band is part of a new-psychedelic revival that puts them in the same school as artists like Tame Impala and King Gizzard. And that’s part of the story to be sure, but if it conjures visions of mix of Pink Floyd and the Grateful Dead that would be misleading. After a half dozen listens to Hot Motion, with its larger than life pop anthems mixed with bold, prog-rock instrumental fills however brief, the combination of talents that make up Temples suggests something more akin to the later edgier experiments of the Beatles, or those Genesis albums post-Peter Gabriel when Phil Collins led the band in a pop-music friendly direction, or the early days of Queen when they were making rocking pop songs that broke all the rules.
The creative vision here rises from the combined talents of singer & lead guitarist James Bagshaw, bassist Tom Walmsley, and Adam Smith on rhythm guitar and keyboards, working with current live drummer Rens Ottnik. Take the nearly 6 minute title track which opens Hot Motion, built on a repetitive guitar riff, a strong swing beat, and catchy vocal melody that opens up to a lush rocking vocal chorus which is the song’s real hook. It’s a smart move that echoes the anthemic sing-along vowel exercises in pop hits by The Police, with an instrumental that breaks out like an orchestrated jam by the band Yes. But here, and throughout the album’s eleven songs, Temples’ never drift from their essential pop/rock focus, editing their more psychedelic explorations so they never detract from the song’s essential melodic elements.
“Holy Horses” is built on a catchy guitar riff, which explains why Bagshaw is often compared to T Rex guitarist Marc Bolan, while “The Howl” relies on a martial drum beat with sparse instrumentation to emphasize its anthemic sing along chorus. “It’s All Coming Out” finds the band at its bubblegum pop best, again with an expansive burst of sonic energy carried on the bed of vocal harmonies, while “You’re Either On Something” recalls that dance pop era dominated by groups like A-ha and the Thompson Twins. At this late date, two decades past the turn of the century, Temples can draw on over 50 years of influences to develop their own approach to creative pop/rock. On Hot Motion they’ve marked off a wide swath that they can happily call their own.
Key Tracks: “You’re Either On Something” / “Holy Horses” / “Hot Motion”
Artists With Similar Fire: Tame Impala / early Queen / The Move
Temples Review History: Volcano (2017), Sun Structures (2014)
Temples Website
Temples Facebook
ATO Records
– Reviewed by Brian Q. Newcomb