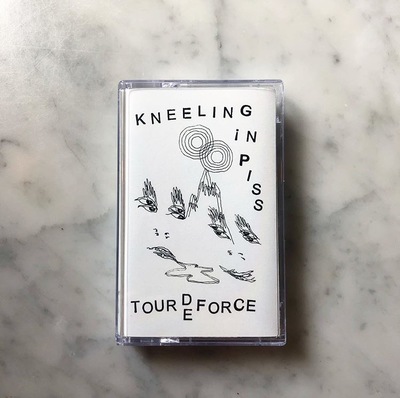 Who: Columbus, Ohio-based Kneeling In Piss have a hell of a debut album on their hands.
Sound: Kneeling In Piss are occasionally jangly, occasionally punk, often lo-fi power pop and all the time fun.
TFN Final Take: Alex Mussawir’s Kneeling In Piss emerged from the ashes of Future Nuns (another excellent band, btw) in 2018. Tour De Force is their debut album, and it seems Kneeling In Piss mean to make a statement with such an alarmingly good first release.
Tour De Force starts with a bang on its opening track, “USA Will Start another War.” It is a timely and incredibly infectious jangle punk song. Parquet Courts wish they could have written this song.
There is a lot of charm and spirit in this lo-fi album. There are poignant and weirdo tracks nestled between the handful of punk-influenced tracks. Kneeling in Piss have constructed an album that does not just do one thing well, they hit a lot of different territory without sacrificing cohesion.
“Timothée Chalamet, Where Are You Going?”, “Kneeling in Piss Theme Song” “Columbus Day” Feeling Romantic sound like trippy 2D platformer video game songs covered by Bamnan and Silvercork era Midlake with their peculiar and clever bloops and bleeps.
“Winston Hightower,” “Song About Being Unemployed,” “Columbus Day,” ”Had a Feeling” and “Song About Quitting the Café” hit a more of a The Unicorns meet David Berman stride. It sounds serious yet lighthearted at the same time. Comparisons to The Fall and Pavement may be apt, but I feel like Kneeling In Piss are more loose and playful than either of those two bands.
“Social Scene’s” slow buildup to a pop-punk crescendo is one of the most satisfying songs I have heard in 2019. Tour De Force has a lot of offer. They have a kooky charm that is undeniable and relentlessly catchy. I look forward to hearing more from this fantastic band.
Kneeling In Piss Website
FAH-Q Catalog
Anyway Records
– Reviewed by Daniel Taylor