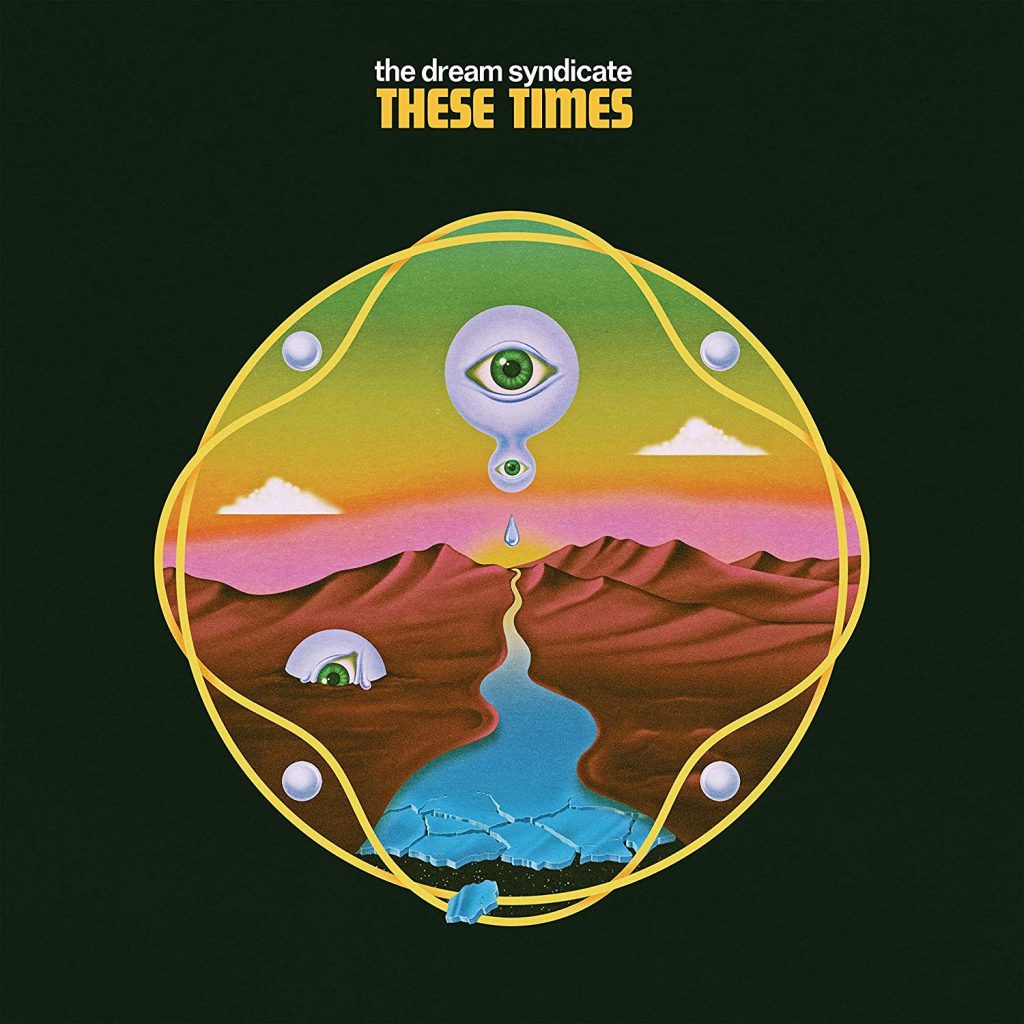 The Dream Syndicate
These Times
ANTI- [2019]

Album Review: The Dream Syndicate is a band with two distinct periods of activity, with singer/songwriter Steve Wynn as the thread that connects the two. Active throughout the 80’s, the band’s first incarnation was part of the so-called Paisley Underground, a collection of So. California bands that tended to mix of 60’s psychedelia, vocal harmonies a la The Byrds, and electric guitar jams in the mode of Neil Young, the most popular of which was The Bangles. For their part, The Dream Syndicate’s albums, the best remembered being “The Days of Wine and Roses,” also displayed an affinity for Lou Reed’s writing for the Velvet Underground, and the expansive guitars of Television. I caught the band live when they toured in the opening slot for U2’s “War” tour.
Wynn continued making music as a solo artist throughout the 90’s and 00’s, releasing indie albums, touring solo and with the Miracle 3, and was part of an indie supergroup under the moniker, Gutterball, and more recently formed The Baseball Project with his wife Linda Pitman, plus Peter Buck and Scott McCaughey of R.E.M. and The Minus 5. In 2012, Wynn brought together a Dream Syndicate reunion, included drummer Dennis Duck and bassist Mark Walton who had played in earlier versions of the band, and brought in his Miracle 3 guitarist, Jason Victor, who have remained together for the last 7 years, releasing an album for Anti-, “How Did I Find Myself Here” in 2017. In an unexpected bit of serendipity, I managed to catch Dream Syndicate earlier this year opening for Mott the Hoople on their too brief US tour in Cleveland. While my memory of seeing Wynn & Co. back in the early 80’s echoes that Paisley psychedelic approach to what was essentially punked up folk/rock, in Cleveland the new quartet played straight-forward hard rock accentuated by Duck’s powerful drumming, with spacy guitar solos from Victor.
On These Times, we hear how much Wynn has absorbed and expanded on his early influences, with host of loud guitar songs balancing the sophisticated turns of Richard Lloyd and Tom Verlaine in Television, and Neil Young at his more expansive and psychedelic. Wynn tends to speak/sing, with echoes of Reed and Bob Dylan, while Chris Cacavas supports the vocal melodies with subtle keyboards, and Wynn & Pitman with Stephen McCarthy provide backing vocal harmonies that add to the songs’ musical impact. The opening tracks—“The Way In” and “Put Some Miles On,” are built around solid guitar hooks, but in “Black Light” and “Bullet Holes” there’s more reliance on keyboards, and in the latter those vocal harmonies are more dominant; it’s practically a pop song. And so it goes, The Dream Syndicate proves versatile but never loses contact with core elements of solid songs played with expansive guitar solos.
“Speedway” churns up the guitars into overdrive,” “Recovery Mode” leans more on Wynn’s vocal melody and harmonies, while the longer “The Whole World Is Watching” opens with a spacy bass-led funk jam that reveals another side of the band’s psychedelic potential. Here at the end of 4 decades, Wynn &n Co. sound like they’ve got a fresh lease on their creative life, and the record as a whole is proof that what some thought was old is new again.
Key Tracks: “The Way In” / “Bullet Holes” / “Speedway”
Artists With Similar Fire: Filthy Friends / Television / Arthur Buck
The Dream Syndicate Website
The Dream Syndicate Facebook
ANTI-
– Reviewed by Brian Q. Newcomb