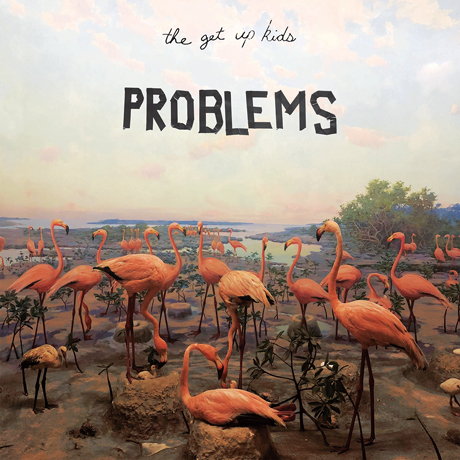 The Get Up Kids
Problems
Big Scary Monsters/Polyvinyl Records [2019]

Album Review: The Get Up Kids came out of Kansas City in the mid-90s in that second wave of emo, punk/pop bands like Blink-182, Jimmy Eat World, and My Chemical Romance. Best remembered for their 1999 release, “Something to Write Home About,” the band broke up after four albums in 2005 only to re-group four years later. Problems, their first full length album in 8 years, comes one year after the four-song EP, “Kicker” where the quintet set aside later attempts at expanding their sound to more measured alternative rock, and returned to the energetic pop/punk of their early days, a theme that continues across the 12 tracks found here.
Punchy rhythms, catchy melodic hooks, and big sing-along choruses are the order of the day, which will no doubt please their earliest fan-base, but while the lyrics revisit the angst of youth, they also deal with grown-up issues, from adult responsibilities, parenting, the passage of time and nostalgia. In one fun song, they pay tribute to “Lou Barlow,” the songwriter/rocker who played with Dinosaur Jr. and Sebadoh, with the fun line “I started singing all his songs/he refused to sing along,” but it’s really a song about belonging, and the changes people go through in relationships. Similar issues surface in “Fairweather Friends,” a fun bash ‘em up rocker, “Common Ground” and “Waking Up Alone,” a bit of retro techno pop.
Matt Pryor delivers the vocals with a sense of urgency, spurred on by aggressive rhythm section, the drumming of Ryan Pope and bassist Rob Pope, the edgy guitar riffs of Jim Suptic and keyboards by James Dewees. The Get Up Kids aren’t reinventing the wheel, but they’re also not living in the past, even as they return to the punk/pop sounds that first earned them a place at the table. There will always be room for fun sounding rock & roll like this that puts its hooky accessible side forward, especially when it makes an attempt to be honest about the passage of time and the damage done in the meantime.
Key Tracks: “The Problem Is Me” / “Fairweather Friends” / “Symphony of Silence”
Artists With Similar Fire: Weezer / Blink-182 / All American Rejects
The Get Up Kids Website
The Get Up Kids Facebook
Big Scary Monsters
Polyvinyl Records
– Reviewed by Brian Q. Newcomb