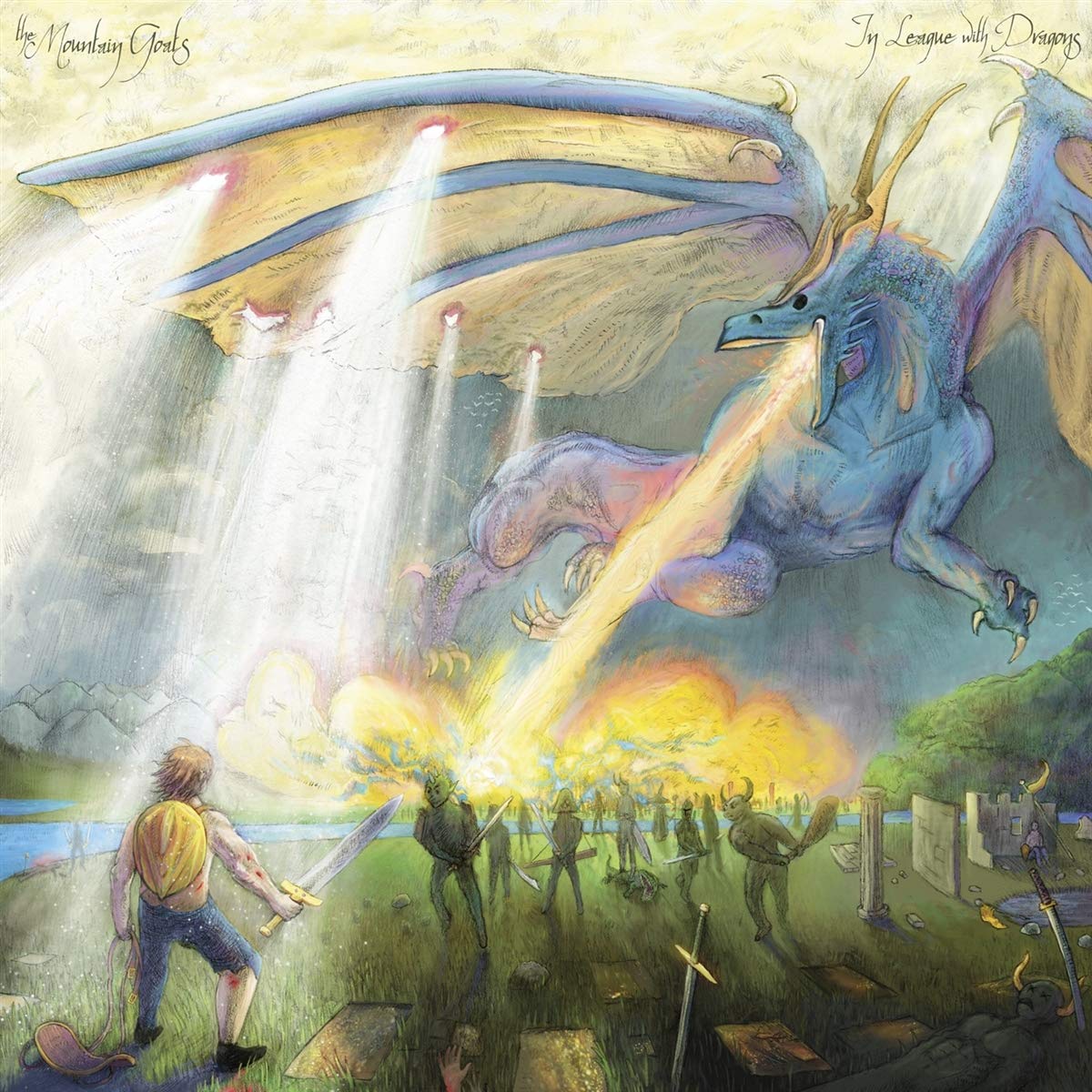 The Mountain Goats
In League With Dragons
Merge Records [2019]

Fire Note Says: Mountain Goats’ 17th album, In League With Dragons, takes on the world of Dungeons & Dragons, and various other wizards in singer/songwriter pop/rock that belies the darker stories.
Album Review: After addressing the coming of age issues of Transcendental Youth back in 2012, the violent world of professional wrestling on Beat The Champ in 2015, and the dark music and culture of the 80’s era Goths in ’17, singer/songwriter John Darnielle leads The Mountain Goats into imaginative gaming world of Dungeons & Dragons with their latest, In League With Dragons.
Of course, Darnielle is such a great writer and storyteller that he’s always telling a bigger story than the given theme that has sparked his imagination as a compelling starting point, often sharing the intimate insecurities and uncertainties of the characters that embody his inner wonderings in a way that expresses the universal longing to by understood, and find companions with whom to share on the journey of life. All of which is to say, that even if your only exposure to the D&D world is watching the characters on “Big Bang Theory” or “Stranger Things” play the game, Darnielle’s songs tell stories that are compelling for their human detail, complexity and significance, and delightfully in narratives dripping with humor and wit about more than one kind of wizard and warrior.
And what has made this work so well over the course of, now, 17 albums, is that Darnielle’s been able to plant his dark, curious stories in catchy pop/rock songs, which tends to add to the fun. Take for instance, the most cheerful, up-tempo, bouncy rock & roll song on In League With Dragons, a fun little sing-along number called “Cadaver Sniffing Dog,” where the narrator describes “stray clumps of hair and blood and rain/fragments of bone in the drain/he’s trying to keep the airway clear/but the damage is too severe.” The punchy rhythm is accentuated by Jon Wurster on the drums, with a solid bassline added by Peter Hughes, and there’s a full choir supporting the melody on the chorus, plus an over-the-top electric guitar solo, all of which add to the sense of irony which is often at work in Darnielle’s songcraft.
Matt Douglas is the fourth member of The Mountain Goats at live shows, playing the electric guitar to Darnielle’s acoustic rhythm, and adds a variety of other musical supports, playing various keyboards, and flute and sax to give the songs a greater sense of musical variety. For this album, producer Owen Pallett, who contributed string arrangements and played violin on the 2009 Goats’ album, “The Life of the World to Come,” and has contributed similarly to Arcade Fire and The National among others, plays a variety of instruments and draws on studio players for help to add special parts, like the fun pedal steel guitar part on the title track played by Dan Dugmore.
For the opening track, “Done Bleeding,” Wurster and Hughes start the track on a solid beat, for an off-beat tale, which apparently was written on piano. “Younger” kicks with a funkier beat and fast acoustic guitar chording, plus it features a hot sax solo, as it tells the story of a faded rock star, using a teleprompter and “coughing up blood.” Darnielle and Pallett make smart choices throughout, mixing things up with a strong acoustic guitar run in “Doc Gooden,” that gets mirrored on a Hammond organ. Darnielle’s songs move in and out of basic pop/rock formats, and the instrumental variations keep things sonically interesting while telling the story of an aging baseball pitcher, a wizard of another kind. But realistically Mountain Goats’ fans are drawn more for Darnielle’s compelling storytelling with all it’s dark humanity and brokenness, while the songs provide the musical framing.
Key Tracks: “Cadaver Sniffing Dog” / “Passaic 1975” / “Doc Gooden”
Artists With Similar Fire: The Decemberists / Craig Finn / Death Cab for Cutie
The Mountain Goats Website
The Mountain Goats Facebook
Merge Records
– Reviewed by Brian Q. Newcomb