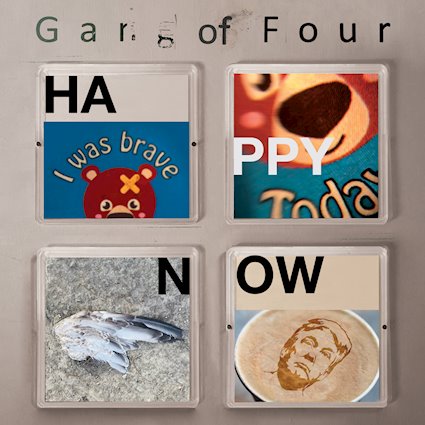 Fire Note Says: Guitarist Andy Gill keeps the Gang of Four alive, and they respond to the current political climate with their 10th album, Happy Now.
Album Review: Gang of Four started out in the same art school/university pool from Leeds, UK, in the late 70’s that gave us the Mekons. Bringing together a unique appreciation for funk rhythms and electronic dub sounds into a punk sensibility with politically-charged lyrics, Gang of Four broke real creative ground. In their first album, “Entertainment!,” Gang of Four produced what RollingStone Magazine would describe as the fifth greatest punk album of all time. By the early 80’s, Sara Lee had joined the band on bass and background vocals, and helped the band produce the closest thing they ever had to a pop hit, in “I Love a Man in a Uniform.”
The band broke up in the mid-80’s, but guitarist Andy Gill and vocalist Jon King regrouped in the late 80’s, recorded two albums but stayed around for nearly a decade as a live band. The duo regrouped Gang of Four again in the mid-00’s, and while King retired in 2011, Gill has kept the band’s vision alive recruiting Thomas McNeice on bass, John “Gaoler” Sterry on vocals, with whom he recorded the 2015 album “What Happens Next,” and then in 2016 Tobias Humble came on board on drums.
For all the personnel changes, Gill must have a strong sense of what marks the Gang of Four sound as unique and special. That and the current political crises in the US and UK have given the band back its edge and clear sense of purpose that’s been less obvious in the intervening years. “Alpha Male” and “Ivanka – My Name’s On It” address the Trumps’ directly, while “I’m a Liar” and “White Lies” deal with duplicity and those that twist the truth. “Change the Locks” and “Paper Thin” deal with the decline of privacy and rising tensions and suspicions. “Toreador” explores the outcomes of economic and power disparities, but these aren’t sloganeering chants or protest signs shaped into anthems. Rather, the lyrics circle around the issues, holding up a mirror to the actions of the powerful and the inevitable outcomes.
But it’s the music here that deserves most of the attention, as Happy Now finds Gang of Four happily ensconced in its most electronica leaning and enhanced sound yet. McNeice and Humble lay down the lush, funky bottoms that keep their sound suitable for the dance floor, while Gill’s lash and burn guitars move in and out, mixing with sequenced synths and layers of sound. These songs find a choice balance between Gill’s punk aggressions and angular, often noisy playing works with the more pop friendly melodies in Sterry’s vocals and the rather soaring keyboard textures. This mix of greater compositional complexity, and the assertive energy and funky bottom, puts Gang of Four back in that somewhat unique musical space that first put them on the map.
“Lucky” is listed as a “bonus” track, but the high-energy dancefloor feel recalls the late 80’s when band’s like INXS were reviving an interest in funky, pop-friendly punk. With Happy Now, Gill and his new young supporters have reconnected at this late date to the musical, energy and soul that inspired so many bands that came after them, from R.E.M. to Red Hot Chili Peppers to Nine Inch Nails. And given the political climate, this return to form couldn’t have happened at a more perfect time.
Key Tracks: “Paper Thin” / “Alpha Male” / “Change the Locks”
Artists With Similar Fire: The Clash / New Order / Depeche Mode
Gang Of Four Website
Gang Of Four Facebook
Gill Music
– Reviewed by Brian Q. Newcomb