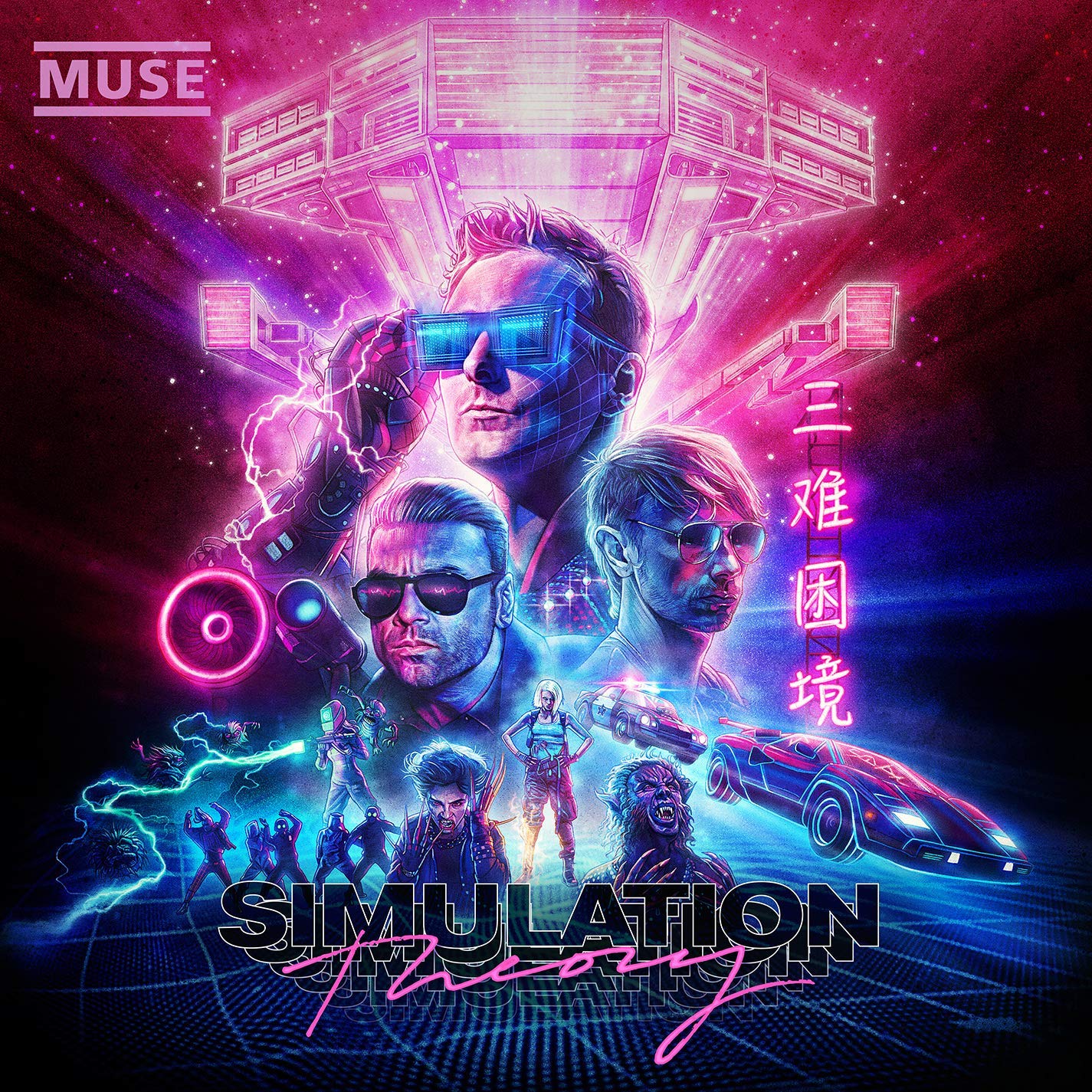 Fire Note Says: On their 8th album, Muse loosens the concept formula enough for more humanity to shine through their larger-than-life arena rock anthems.
Album Review: Muse’s 8th album in their nearly 20 year career, starts off with a rhythmic drum beat that could easily have been designed by a computer programmed to imitate a human creation, thus the song’s title: “Algorithm.” In the past, Muse’s concept driven albums have dealt with themes from Orwell’s “1984” and portraits of a dystopian future marked by omnipresent government surveillance and propaganda, themes of rebels revolting, the threat of apocalypse, and of course the proliferation of mechanized killing machines on 2015’s Drones. While Simulation Theory is a bit more relaxed conceptually, it’s not hard to recognize returning themes.
Not unlike the Matrix, humanity finds itself trapped in a computerized simulation, and the first half of the album contains songs that describe the inhumanity and oppression of “The Dark Side,” marked by “Pressure” and “Propaganda.” Of course, Muse’s arena rock anthems with occasional excursions into prog rock and electronica tend to work most effectively when they hang their songs on big catchy hook, especially for those inclined toward big, bold productions.
Reminiscent of Pink Floyd’s themes, but more inclined toward the music of Queen, singer/guitarist/keyboardist Matt Bellamy, Chris Wolstenholme who plays bass and additional guitars and keys, and drummer Dominic Howard have produced their most pop accessible album in a long time in Simulation Theory. And of course they are smart enough to through in the kind of human flourishes that their fans have come to expect, even when deep in the “Algorithm,” for instance Bellamy’s love for running arpeggios up the piano keyboard on the opening track. By the second track, “The Dark Side,” the human is already crying “break me out, set me free,” while the catchy synth loops match the playful dance rhythm. “Pressure” is a syncopated rocker built around some big guitar riffs, while “Propaganda” returns to a more mechanized rhythm, juxtaposing the computerized voice against Bellamy’s falsetto on the verses.
With “Break It To Me” the simulation starts to lose ground to the more expressive human element, which comes through entirely “Something Human,” with a noticeable stylistic shift. The former gives Bellamy a chance to show of his love for Tom Morello styled guitar heroics, complete with that whole hip-hop “scratching” sound. The latter song, shifts completely away from the dominant synths and bold robotic drums that tended to define the algorithm, so the folk pop stands out as something altogether different, “Something Human.”
“Thought Contagion” follows, a reassertion of the algorithm’s controlling propaganda, the viral disease of distorting the truth to manipulate, but the human response is to “Get Up And Fight,” which is more musically similar to “Something Human”’s lighter pop on the verses, but of course raises up in an anthemic chorus. Of course, now the rebels need to man the “Blockades,” another synth romp that finds Muse close to ELP territory, but with a familiar melodic structure to past works. “Dig Down” is the call to action, with the assurance that “we will find a way,” with a big Freddie Mercury sing-along chorus no doubt expected to be a big show-stopper live, with a Brian May styled guitar solo for good measure. The album closes with “The Void,” which revisits the ominous threat of dehumanization, but in the end reasserts the belief that “they are wrong,” even as the heavy gloom is cast.
The Deluxe version of the CD features five bonus tracks, alternative versions that reveal divergent music choices that Muse and their producers could have gone with: a version of “The Dark Side” played delicately largely on piano, with a more subdued vocal; versions of both “Staying Human” and “Propaganda,” where the larger production is pealed back and the verses feature Bellamy singing over only an acoustic guitar, and simple drums; and a version of “Dig Down” with a Bellamy singing with a Gospel choir, a la Bono and “I Still Haven’t Found…”
Muse is still aiming to deliver big arena rock-filling anthems, but here they’ve matched their larger than life productions and sci-fi concept tendencies with elements that leave a bit more room for humanity and a more organic sense of musical expression. Simulation Theory provides plenty of sonic and visual bombast, but is at it’s best when the flesh and blood aspects surface.
Key Tracks: “Something Human” / “Pressure” / “Dig Down”
Artists With Similar Fire: Queen / Emerson, Lake & Palmer / Styx
Muse Website
Muse Facebook
Warner Bros. Records
– Reviewed by Brian Q. Newcomb