The 1975: A Brief Inquiry Into Online Relationships [Album Review] 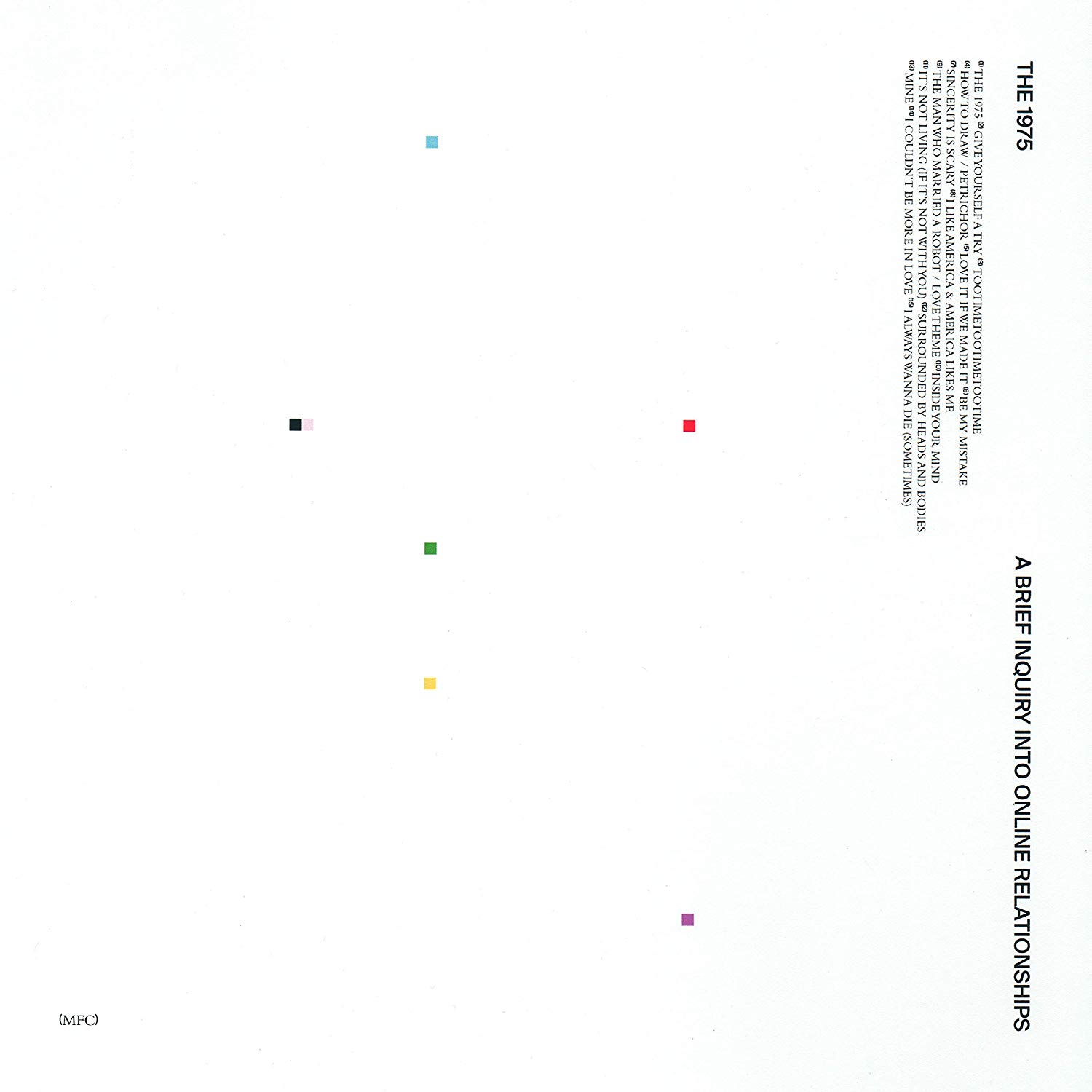 The 1975
A Brief Inquiry Into Online Relationships
Interscope Records [2018]

Fire Note Says: Third album from The 1975 delivers more great pop melodies, with an undercurrent of loneliness and addiction… so it’s a party!
Album Review: The 1975’s lead singer Matt Healy gets right to the point in “Give Yourself a Try,” the opening track of the band’s new album, A Brief Inquiry Into Online Relationships: “What would you say to your younger self? …You’ll make a lot of money, and it’s funny/’Cause you’ll move somewhere sunny and get addicted to drugs.” So at 29, still only sober from his heroin addiction for a handful of months, Healy and his band made up of friends that go all the way back to Wilmslow High School, a few miles from Manchester, UK, have just released their third album, the follow-up to 2016’s “I Like It When You Sleep, For You Are So Beautiful Yet So Unaware of It” (https://thefirenote.com/2016/03/18/the-1975-i-like-it-when-you-sleep-for-you-are-so-beautiful-yet-so-unaware-of-it-album-review/), planned a world tour, while promising to release their fourth album next summer. The frantic creativity and massive promotional buzz around the band brings to mind the line from “Hamilton,” “Why do you write like you’re running out of time?”
So, while the text of this new album is “Online Relationships,” there’s a very strong subtext running through the songs related to Healy’s wrestling with addiction, loneliness, and death. As such, we’d be mistaken to come to the music of The 1975 anticipating blues, or goth or anything that smacks of being a “downer.” Instead, we find high-energy techno influenced pop far more the norm, although as with “When You Sleep,” The 1975 are eclectic to the point of scattershot when it comes to musical style and overall sound. Often labeled a “rock band” (they opened for the Rolling Stones, so there’s that), but rarely do they settle into a traditional rock formation. “Give Yourself A Try,” the album’s first single, fits the description above, fast, bouncy dance pop, with that engaging melodic hook that is the songs title.
In what amounts to a message song, “I’d Love It If We Made It” takes on the issues of modern life, touching on issues that fueled the Black Lives Matter movement, the world refugee crisis, “fake news,” and even quotes President Trump several times, ultimately condemning how “Modernity has failed us,” before leaning into the hooky chorus which merely repeats the title. As messages go, it’s not particularly convincing or insightful. Then there’s the buoyant pop song, “It’s Not Living (If It’s Not With You),” which based on the title suggests a love song, but in actuality it’s a graphic description of the junkie’s life. These are musically up-tempo pop songs, with melodic hooks that really do work, but the lyrics are darker, at times boardering on despair.
Similarly the ballad “Be My Mistake,” played primarily on acoustic guitar, with electronic embellishments, is about being lonesome enough to sleep with someone on the road. The power ballad, “I Couldn’t Be More In Love,” the only song here with a traditional guitar solo, sounds like a song about love and devotion, but it’s actually a break up song. And, the set closing song, a lush song that builds to a strong cinematic close, but the text here is isolation and loneliness, but this time the title says it up front: “I Always Want to Die (Sometimes).”
As for the album’s stated message about online relationships there’s the track titled “The Man Who Married a Robot / Love Theme,” a narrator tells the story about a lonely man who’s best friend was the internet, and then he died “in his lonely house, on the lonely street, in that lonely part of the world. You can go on his Facebook.” It’s a bleak portrait of modern life stripped of real human relationships and love, and it’s awfully sad.
Which is a pretty apt description of the emotional content of The 1975’s music here in 2018. Musically, they have plenty going on of interest, and certainly they have a way with a melodic pop hook, and in a strange and unique way they see the dangers of betting one’s entire existence on the artificial connections that come with Facebook “friends” and Instagram “likes.” But at least here, right now, that’s as far as it goes. The title for the follow-up album promised next May is “Notes on a Conditional Form,” so maybe by then they will have moved beyond a diagnosis of the dangers of the time we live in to some prescriptive thoughts on a remedy. In the meantime, they’ve given us great dance songs to sing along to as we live our dreary lives to their end.
I understand that The 1975 are great live, that they really deliver on the concert stage, and clearly Healy, and his friends – George Daniel on drums, synths, and co-producer, Adam Hann on guitar and keyboards, and Ross MacDonald on bass, keys, samples, synths – are crafting interesting music, and they clearly know how to create a media buzz. Near the end of Online Relationships, Healy & Co. deliver an old school jazz ballad, imitative of Gershwin and the Great American Songbook, where the one verse says, “Looking back on 2009 / When people said that it was raining all the time / I see sunshine ‘cause I know that you are mine.”
Is that a sign of hope, or another bait and switch where he’s singing again to his drug of choice? It seems to me, the answer to that question will tell us if this band is destined for the great things that many suggest they are capable of achieving. I’d like to believe they can make it work.
Key Tracks: “Love It If We Made It” / “Give Yourself A Try” / “I’m Not Living (If It’s Not With You)”
Artists With Similar Fire: Imagine Dragons / Panic! At the Disco / Maroon 5
The 1975 Website
The 1975 Facebook
Interscope Records
– Reviewed by Brian Q. Newcomb