Richard Thompson; Southgate House Revival, Newport, KY – Thursday, December 6, 2018
Thursday night’s performance by Richard Thompson and his trio would have been a revelation, if I hadn’t come in with such high expectations. But having seen Thompson back in the early 90’s when major label tour support was still a thing, and he was carrying a full band, often including his son Teddy and the not related but longtime friend Danny Thompson, to intimate acoustic shows, like his “1000 years in popular music” tour, and I had the good fortune to hear him with this very trio play an opening set at Dayton’s outdoor venue, The Fraze, two summers back with Bonnie Raitt, so I arrived anticipating a very lovely live music experience with a talented and witty concert performer. But, again, he more than blew me away, delivering nearly 2 hours of great music, emphasizing songs from his latest album, “13 Rivers,” which I’d already picked as my favorite album of 2018.
As venues go, Southgate Revival, a re-purposed church building, is a fun place to catch a show, providing an especially intimate performance space for the standing crowd, with reserved folding chair seats along both sides of the venue, views maintained by the elevated stage. Thompson led his “trio” onto the stage in a rather relaxed fashion, drummer Michael Jerome and bassist Taras Prodaniuk, but it’s worth noting that Thompson’s guitar tech, Bobby Eichorn, who tuned and attended to Thompson’s guitars throughout the show, also played as secondary guitarist on about 75% of the songs, sitting often, providing similar support as on the latest album.
Richard seemed eager to play his guitar right from the start, picking up his aged pink Stratocaster, and launched the band into two solid rockers from the new album, “Bones of Gilead” and “Her Love Was Meant for Me,” with noticeable aggression on the song’s solo breaks. He did slow things down a tad for “Take Care the Road You Choose,” as song from his 2007 release, “Sweet Warrior,” which found Jerome using brushes for a gentler, jazzy touch, and Thompson’s guitar solo was both emotionally satisfying as technically beautiful.
And Thompson’s British wit and charm were evident from the start. Almost apologizing for starting out with two in a row from his newest album, wearing his signature black beret, he promised “we’ll get too those timeless classics you drove hundreds of miles to hear, later in the evening… about 3 a.m.” And then, introducing the next song, a rarely played 50-year-old song, “Tale in Hard Time,” that he wrote and recorded with the Fairport Convention, he asked, have some of you been listening this entire 50 years, and a few hands in the crowd went up. Thompson then added, “We need to ask you to do us a favor, don’t die. We need you to stay around so we can continue to play to your key demographic.” 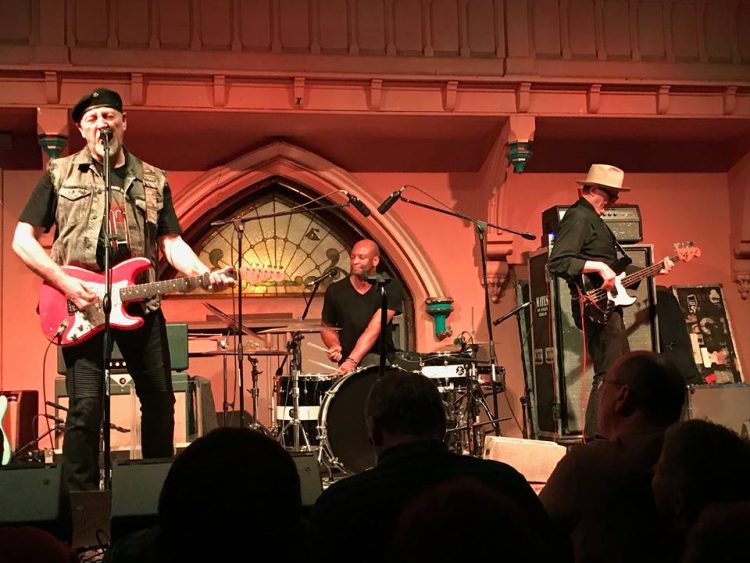 Next up was “Guitar Heroes,” a track recorded on his 2015 Jeff Tweedy produced album, “Still,” where each verse sets up Thompson to play in the style on one of his major influences. This song is not only great fun, but it displays Thompson’s knowledge and technical dexterity when imitating the musical style and genius of Django Reinhardt, who has a recognizable approach to jazz, Les Paul, who is often credited as one of the pioneers creating the solid-body electric guitar and the design of the Gibson instrument that bears his name, plus his playing about which Thompson sings I’m a “bebop, twang-headed, rock & roll fool,” and Chuck Berry, who forever shaped rock & roll song craft with a distinct soloing flair. The two remaining verses and noteworthy guitar heroes may be less than household names: James Burton, an early session player who’s work with Ricky Nelson, and later Elvis Presley, came to define the preferred guitar sound on many early rock & roll recordings; and, finally, British instrumental band The Shadows and guitarist Hank B. Marvin, who’s sound was labeled “surf rock,” and they also backed up English pop star, Cliff Richards for a decade. And Thompson, moved through each verse, ably imitating the playing style of these five greats, and giving hints at what lays behind his own virtuoso performance style.
Returning to “13 Rivers,” Thompson played the soulful and sorrowful “The Storm Won’t Come,” and again took a long, impressive solo… for this guitar fan, it was almost too good to be true. He moved to an acoustic cut-away for a turn through “They Tore the Hippodrome Down,” which included a couple sweet solo spots from Prodaniuk and Jerome, in its jazzy reminiscence of the demolished dance hall. The song came from last year’s “Acoustic Rarities” album, about which Thompson joked that it turned out the real rarities were people that purchased the album.
Thompson stayed on acoustic guitar for the bluesy “Dry My Tears and Move On,” which comes from his excellent 1999 release “Mock Tudor,” where his solo exhibited he was just as adept on an acoustic as he had shown on electric. For the next song, the band left the stage, as Thompson played a long-time fan and concert favorite ode to a beloved motorcycle, “1952 Vincent Black Lightning,” which got a loud response from the very support audience.
Back on his Strat, Thompson played another from his latest, “The Rattle Within,” a rocker with a fun edgy rhythm, and during that solo Thompson kept turning the tuning peg on the low E string down to a D and then back, while playing on the higher strings, an effective technique. Next up was “Can’t Win,” long a concert favorite that dates back to his 1988 album, “Amnesia,” an angry rocker that had his fans standing around me near the front of the room singing back with him on the repeated line, “the nerve of some people,” and then again, perhaps inspired by the vitriol of his own song, Thompson took another huge solo, playing with grit, delivery an angry set of licks that matched the emotion of the lyric. All I could do was shake my head and say wow, as that one finished. Wow.
Returning to another 50-year-old song from Thompson’s first group, The Fairport Convention, Thompson delivered what became another fan sing-along, “Meet on the Ledge,” which if anything is an affirmation of friendship. Then he returned to the “Sweet Warrior” album for another angry rocker, “I’ll Never Give It Up,” which has that great sing-along hook, “Puff until you burst, boy/That’s the way, that’s the way.” Aside from the great guitar playing and Thompson’s apparently affable disposition, I was beginning to pick up on another theme, there were quite a few angry rock anthems in the mix. 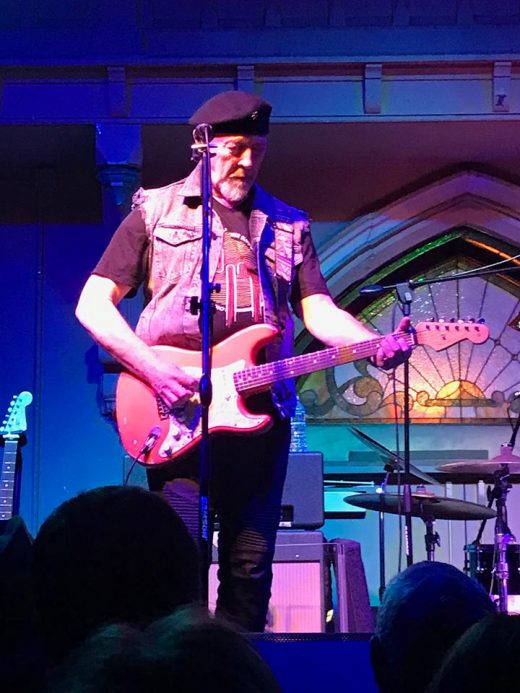 The cold weather outside was long forgotten as the room had heated up with sweaty rockers, average age in our 60’s if I had to guess. Thompson switched to a 12-string Telecaster for a much beloved song, “Wall of Death,” that goes back to the break-up album of all break-up albums, 1981’s “Shoot Out the Lights,” recorded with his ex-wife Linda. The song, which uses carnival rides as a metaphor for life’s ups and downs, had the two married couples standing near me singing along. It’s clearly one of the highlights of Thompson’s now 50+ year career. He hopped back on his familiar pink Strat, for another hot run through, “Put It There Pal,” from the mid-90s, another angry rant it turns out about a duplicitous friend that had us all singing along, and Thompson again, playing his heart out. The set ended with another fan favorite dating back to the early 80’s, “Tear Stained Letter,” which had the crowd singing along on the repeated chorus, “oh, oh, ooohhh, love, love, love/Cry, cry if it makes you feel better/Set it all down in a tear stained letter.” The band, which by the way, was impeccable throughout the over 90 minute set. Jerome and Prodaniuk, on drums and bass respectively, were solid, energetic players and each shone out in delightful interplay, the way musicians only can in a power trio scenario like this, always shining through with their own creativity, but supporting Thompson and his songs first and foremost. A very compelling concert watching these seasoned musicians play together.
Thompson wasted no time returning to encore, coming back first solo to perform two songs on acoustic, “Beeswing,” a love song that recalled Thompson’s earliest British folk song influences, recalling a relationship with a free-spirited woman during the “summer of love,” and “Dimming of the Day,” from the era when he was a duo with his ex-wife and singer Linda, a song that has been a classic covered by many, but most memorably by Bonnie Raitt. Two band songs closed out the night, “Trying,” one last cut from his monumental new album, “13 Rivers,” and then the final song was a cover actually, “Take a Heart,” by an English 60’s pop band, which was a good way to bring the energy down a tad, and close out the night.
Opening were Joan Shelley, supported by guitarist Nathan Salsburg, both from Louisville, KY. They have opened for Richard’s acoustic shows, on previous tours. They played a handful of Shelley’s songs, interesting for her use of open tunings, and gentle melodies.
But in the end, nobody came out on that cold, wet winter night for anything other than the music of Richard Thompson, and fans of the singer, song-writer, and especially on this night a world-class rock guitarist, with very few peers.
–Reviewed by Brian Q. Newcomb

The 1975: A Brief Inquiry Into Online Relationships [Album Review]