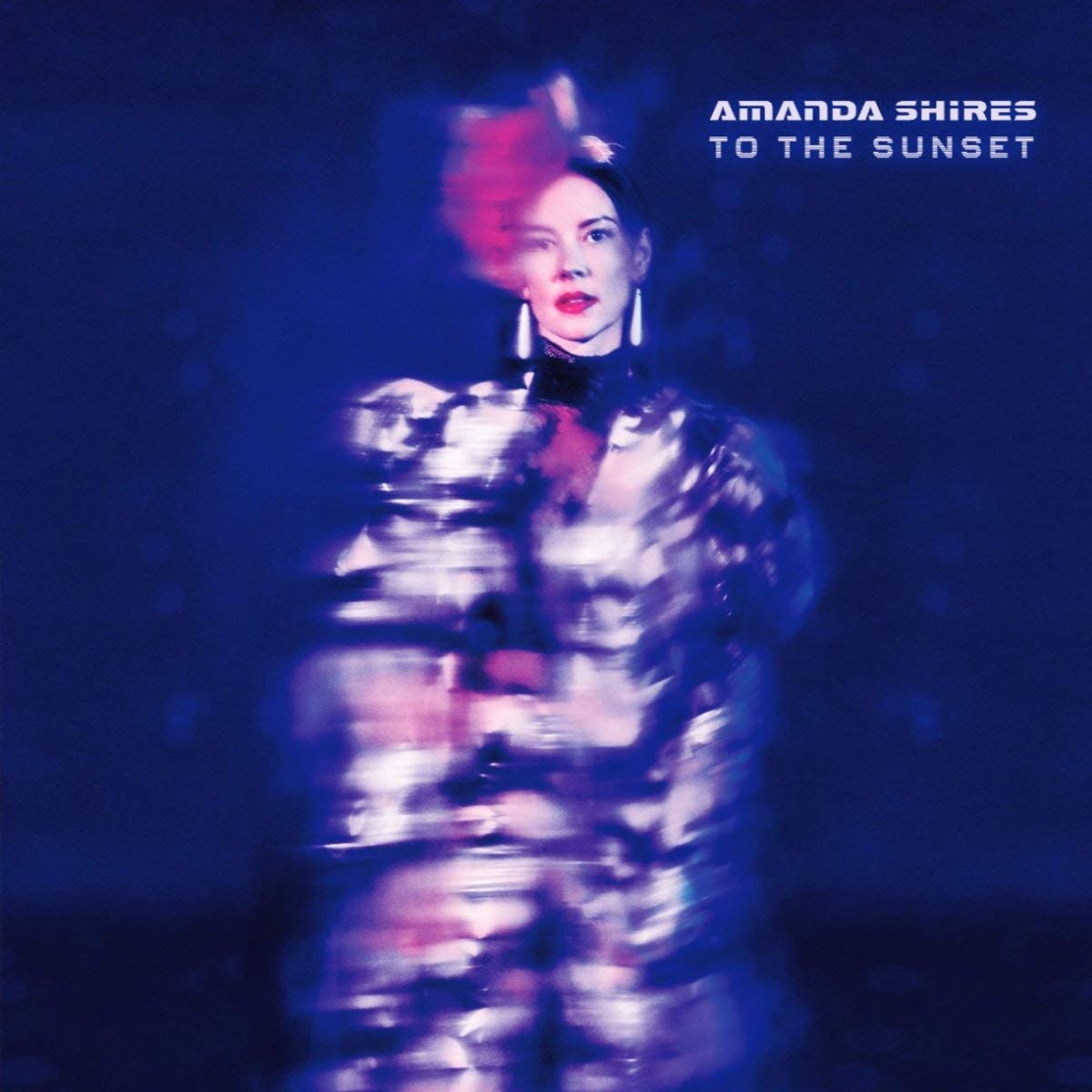 Fire Note Says: Amanda Shires’ may be best known as Jason Isbell’s wife and violinist in The 400 Unit, but on her 7th solo album she expresses her own poetic voice.
Album Review: In her version of a “getting dumped” song, Amanda Shires’s heroine realizes that she’s “rock ‘n’ roll, and you’re… golf.” She’s not going to be the one getting dumped in “Break Out the Champagne,” so she sings, “Let’s get on with the shit show/Here’s a toast… Adios!”
Shires may have picked up the Emerging Artist of the Year Award at the 2017 Americana Music Honors & Awards, but like the woman in her song, on her 7th solo album, To The Sunset, with this year’s model her voice may still be a little bit country, but she’s more than a little rock and roll. These days, Shires is most commonly recognized for her violin work and backing vocals with her husband, Jason Isbell’s band, The 400 Unit, but she’s also worked with John Prine, Todd Snider, and Justin Townes Earle, as well as her own songs and albums, and in 2017 she also completed a Masters of Fine Arts degree in poetry.
So, it’s no surprise that Shires’ song lyrics are finely crafted, and many of the women in these songs are self-aware and in touch with their feelings. In “Charms,” a song reflecting on the relationship between mothers and daughters, she wonders “Maybe being human is an orphan condition, and what’s missing isn’t meant to be found/Maybe moving forward was my only ambition and I never let myself turn round.” It’s one of the more acoustic songs on the album, and draws closer to folk and country music convictions, as does “White Feather,” where Gillian Welch adds a harmony vocal, where the poet imagines being a scarecrow, the “one doing the frightening, it’s freeing, I suppose.” It’s a metaphor for being lost, adrift in a boat “with no compass or a sky with no stars,” while preferring the safety of “mumbling your prayers to a God you don’t understand.”
But the general tone of the album comes from Isbell’s guitar, and he plays some raucous Southern rock on “Eve’s Daughter,” where Shire’s sounds a bit like Dolly Parton, or maybe Emmylou Harris, fronting the Drive-By Truckers as she sings of taking the risks necessary to achieve “my happy ever after.” In other songs, the women she describes are viewed as decisive, not mere victims of their fate. “Parking Lot Pirouette” describes a woman who spins around to make an unexpected choice, in “Swimmer” and “Leave It Alone,” the females are filled with desire. “The way you walked into the room/If I was a flower I would’ve opened up and bloomed” she sings in the first, and in the second she’s a bit obsessed, and her hands “got a mind of their own.”
Strictly speaking, Shires has not turned her back on Americana and alt/country, but she and producer Dave Cobb have broadened the boundaries to take in a strong pop and rock vibe. While Isbell’s cut through the mix throughout, Shires’ violin playing is les obvious, run through special effects. She may take on the darker feelings of loss, in “Take On the Dark,” but it’s more a rock anthem then a tears-in-your-beers country crier, and even the sad tale of suicide that ends the album (“Wasn’t I Paying Attention), it’s a fact of the matter telling with a solid, somewhat haunting rock hook in the chorus.
Amanda Shires may be leaning on Isbell’s guitar here sound-wise, but as a songwriter and storyteller she’s shining in her own right, singing, playing her violin, and creating songs that refuse to stand in even his very long shadow.
Key Tracks: “Leave It Alone” / “Break Out the Champagne” / “Eve’s Daughter”
Artists With Similar Fire: Neko Case / Gillian Welch / Lucinda Williams
Amanda Shires Website
Amanda Shires Facebook
– Reviewed by Brian Q. Newcomb

1 thought on “Amanda Shires: To The Sunset [Album Review]”