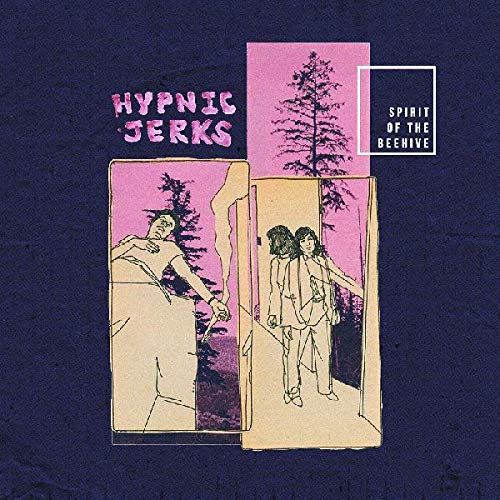 Who: Philadelphia-based Spirit of the Beehive offer us a meandering psychedelic trip.
Sound: Hypnic Jerks is a more mellow affair than the Beehive’s last LP. It is also a bit more of a chore to listen to.
TFN Final Take: I was amazed by 2017’s Pleasure Suck and had rather large expectations for Hypnic Jerks. After a few listens, I am still not 100% into it, but it is growing on me.
Things are much more trippy and mellow this time. Much of the album wanders around playing host to eclectic sample intros and woozy and slow paced rhythms. I felt bogged down just listening to the first two tracks before there was a hint of life with the fuzzy propulsion of “Fell Asleep With a Vision” and the splendid “Can I Receive the Contact?”. There is magic on this album, you just need to be patient and wait for the rabbit to come out of the hat.
“D.o.u.b.l.e.u.r.o.n.g.” is another gem, but in order to get to the heart of this song, you have to endure a lengthy amount of bizarre sampling. I was hoping the sampling would grow on me, but it has not yet. I cannot fight the urge to skip the first minute and a half just to hear beautifully warped and intoxicating final 2 minutes.
Spirit of the Beehive blast off into the stratosphere with track 8, “Hypnic Jerks.” They really have a talent for mixing psychedelic sounds and power pop. I just wished they used it more on this LP. “Monumental Shame” and “It’s Gonna Find You” close out in fine fashion.
“Monumental Shame” has another rather lengthy sample before you get to the twisted and shambling lullaby. “It’s Gonna Find You” is probably the best track on the LP. It is a sprawling testament to all the genres that The Beehive hold dear and reminds me of what a blend of Midlake and Built to Spill might sound like if those two bands ever cared to collaborate.
Hypnic Jerks is not an easy listen, but there is more than enough reward to counter the risk.
Spirit Of The Beehive Website
Spirit Of The Beehive Facebook
Tiny Engines
– Reviewed by Daniel Taylor