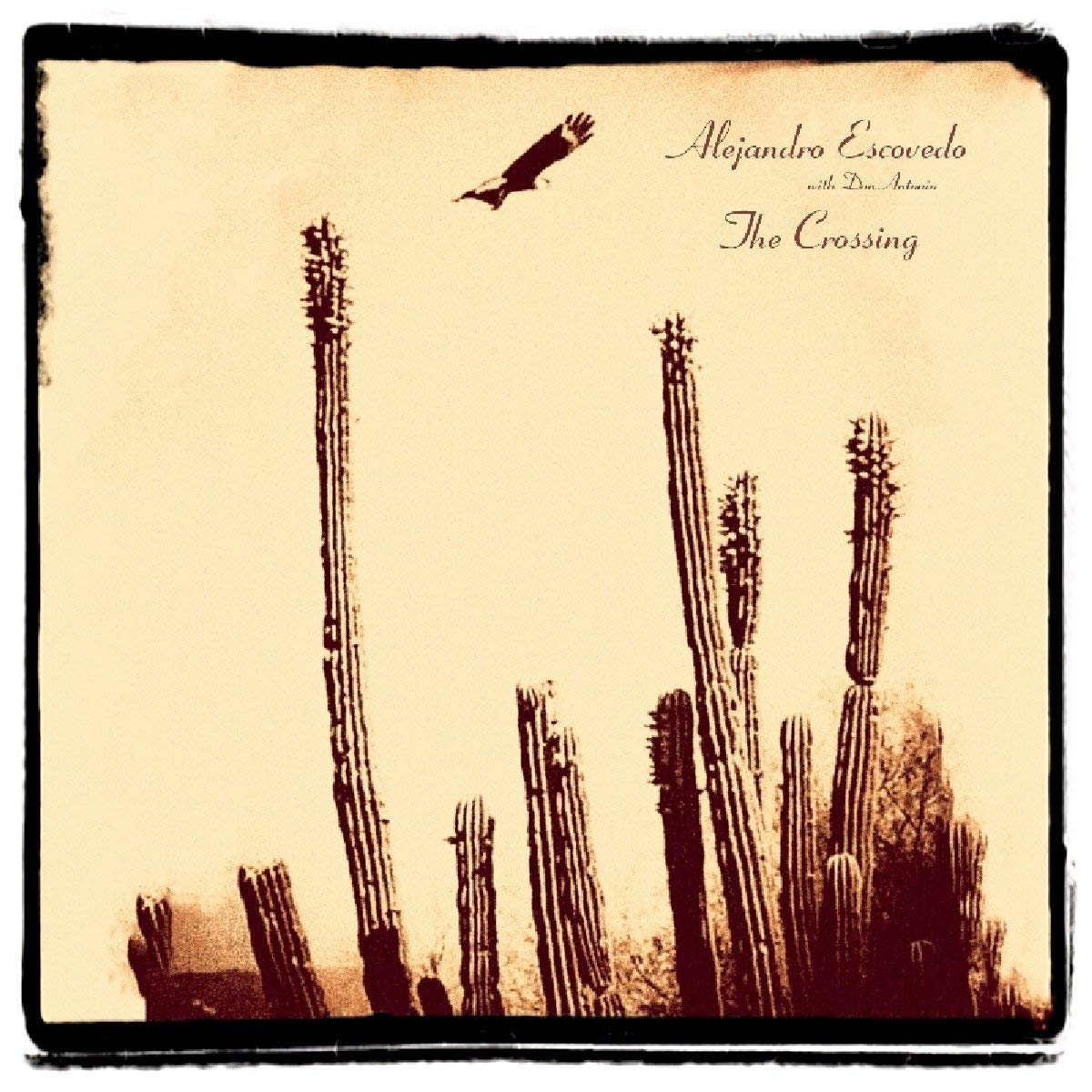 Fire Note Says: The Crossing is another positive notch in the Alejandro Escovedo catalog.
Album Review: By all rights, Alejandro Escovedo should be a household name. After playing with the early punk band The Nuns in the 70’s, and a seminal cow-punk (read Americana) band, Rank and File, in the 80s, he’s been making superior solo albums for the last 26 years full of great songs, and no small amount of rock & roll spirit. In the song “Arizona” on his excellent 2006 release, “The Boxing Mirror,” he sings about a near death experience after passing out on stage, on his 2008 album, “Real Animal,” he paid tribute to his punk roots and the abiding influence of Lou Reed with songs co-written with Chuck Prophet and produced by Tony Visconti, best known for his work with David Bowie, and on his last album, Burn Something Beautiful, Escovedo collaborated with two R.E.M. alums, Peter Buck and Scott McCaughey, to create his very own Monster. Hey, he even did a walk on as a street performer in that “Veronica Marrs,” talk about paying your dues.
Alejandro’s two brothers, Coke and Pete Escovedo have had a career playing the Latin Percussion with Carlos Santana, and Pete’s daughter Sheila E. got famous drumming and singing with Prince. So, it’s no surprise that his Mexican-American heritage has been a consistent subtext in his music, and his immigrant roots were esplored explicitly on his 2002 album, “By The Hand of the Father,” a concept album that honored the story of his parents. On The Crossing, Escovedo’s 13th solo album, he returns to the theme of immigrants coming to America, telling the story of two boys, Salvo and Diego, an Italian and a Mexican who follow their American Dream in hopes of shaping a new life for themselves in Texas. But this fictional story tracks pretty closely to Escovedo’s own story; in the album’s first single, “Sonica USA,” an old school stompin’ punk rocker, he sings “I saw the Zeroes and they looked like me/this is the America that I want to be/Anarchy in Hollywood/land of the free.” It just turns out that The Zeros was a California punk band that his younger brother Javier was in.
The 17-song album begins with “Footsteps In the Shadows,” as the two boys find their way through the night to cross the border, but claim their new homeland in “Texas Is My Mother.” In “Teenage Luggage” the encounter racism straight up in music and the surfing culture, where you expect to find an open-minded acceptance. The surprise ingredient musically this time around, is that the band backing up Escovedo to tell this essentially American story, is Don Antonio, an Italian band that he’d hooked up with for a European tour. While they lack the punk and Americana pedigree often associated with Escovedo’s music, these versatile players bring a wide, cinematic feel that works with this collection of song’s storytelling aspirations. They play it bluesy with a Hammond organ sound on “Something Blue,” imitate a cheesy Farfisa, which is actually made in Italy, for “Outlaw For You” that has an old beach movie style of early rock & roll, an for “Amor Puro” they deliver that early 70’s style pop jazz instrumental the wah-wah guitar and sax.
Recording in Italy, with Brian Deck co-producing (Modest Mouse, Gomez), the band brings an educated approach that suits Escovedo’s approach very well. Don Antonio is made up of guitarist Antonio Gramentieri, who also co-wrote the songs with Escovedo, Nicola Peruch on keys, Denis Valentini on bass, Matteo Monti on drums and Franz Valtieri and Gianni Perinelli. And the album also features cameo appearances by Wayne Kramer of MC5 (who’s taking an all-star version of his band out this year on a 50th anniversary tour), James Williamson of the Stooges, two members of the UK band The Only Ones – Peter Perrett and John Perry – and two Texas mainstays, Joe Ely and Freddy Trujillo. Musically the album comes together nicely, working both as a conceptual whole with a cool story to tell, and with enough strong songs that stand on their own merit independently to satisfy long-time fans of Escovedo’s potent songwriting.
The Crossing is one more notch on the bedpost for Alejandro Escovedo, who manages with the help of this new band, Don Antonio, to deliver music from all the many parts of his history. The aggressive punk in “Teenage Luggage” and “Sonica USA,” the Tejano balladry of “Cherry Blossom Rain,” and several classic rock styles that work in this fun, narrative context; it’s another keeper.
Key Tracks: “Sonica USA” / “Something Blue” / “How Many Times”
Artists With Similar Fire: Ryan Adams / Ian Hunter / Lou Reed
Alejandro Escovedo Website
Alejandro Escovedo Facebook
Yep Roc Records
– Reviewed by Brian Q. Newcomb

Amyl And The Sniffers – “Cup Of Destiny” [Video]