Death Cab For Cutie: Thank You For Today [Album Review] 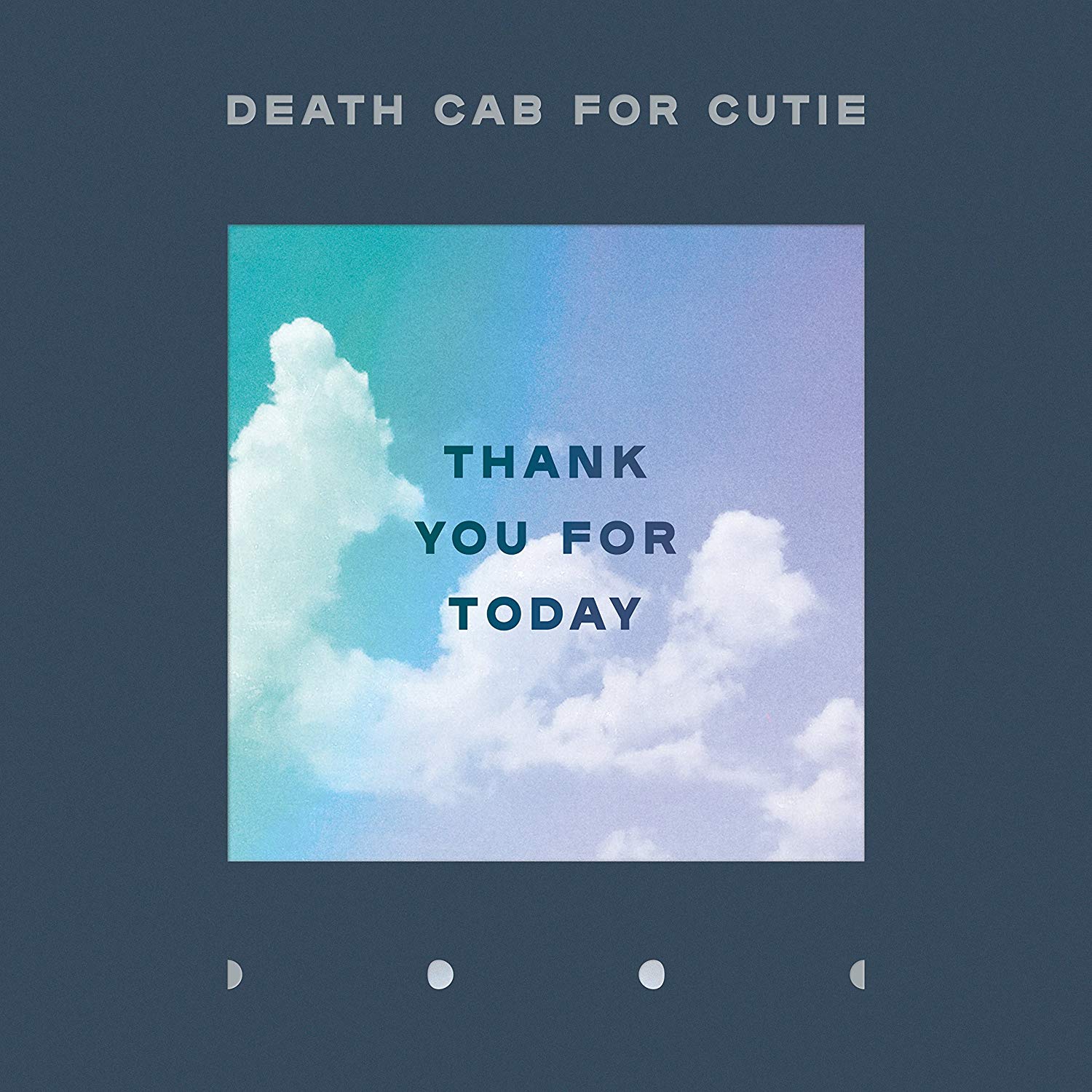 Death Cab for Cutie
Thank You For Today
Atlantic Records [2018]

Fire Note Says: Death Cab For Cutie have what it takes to make this journey worth the effort.
Album Review: Thank You For Today is the 9th studio album from Ben Gibbard’s Death Cab for Cutie, the first without long-time guitarist and producer Chris Walla, who was replaced with Dave Depper and Zac Rae, who play both keyboards and guitars. Rich Costey, who produced the 2015 album “Kintsugi,” has returned, and the musical mid-life crisis that appeared to be in full-bloom appears somewhat resolved on this new chapter, which leans more toward the keyboard and synth textures that have become more pronounced in the band’s sound in this decade.
The album’s first single, “Gold Rush,” has been playing for over a month on the new music satellite radio channel I frequent, and while early listens felt clunky and stiff, it has grown on me with repeat airings, especially the counter-melody with it’s request to “please don’t change, stay the same.” It felt ironic at first, given the band’s musical evolution from its early indie-rock roots to the more polished production that came along with their later major label efforts. But the song itself finds Gibbard nostalgic for a familiar Seattle skyline, that gentrification and upward mobility have started to threaten as new corporate buildings are replacing the old arty architecture. Add the bit of Yoko Ono’s “Mind Train” that gets sampled here, and I was more than willing to give Death Cab for Cutie another chance.
With the last album, Kintsugi, there felt like a musical subtext was at play. While many of the songs came out of standard break-up territory, it felt like the band was trying to find a musical foothold, a place to stand now that they were approaching 20 years as a musical entity, and a lot of the early energy and enthusiasm was feeling misplaced in the music at least for this listener. Now three years later, with the new players solidly in place, there’s still a sense of the band tentatively exploring new paths, but there’s emerging a clearer focus, a recognizable sound beyond Gibbard’s obvious vocal presence.
Thank You For Today opens the record with the electronic feel of “I Dreamt We Spoke Again,” where the subject matter syncs nicely with the floating, airy sound, and the vocal melody is enhanced by the backing vocals on the chorus. And like the opening track, “Summer Years” has crisp an up-tempo finger-picked electric guitar that drives the rhythm, and it feels like Gibbard, who often sings as if an objective observer rather someone in the grips of the emotions his lyrics describe, sounds more engaged, and the musical interactions in the guitar and bass lines mix it up with the drums, which adds a nice complexity to the instrumental parts of what on the surface is a pretty simple song. “Gold Rush” follows, so while things are starting to look up, “Your Hurricane” and “When We Drive” which follow deliver the musical equivalent to sonic wallpaper, it’s a pleasant enough setting, but nothing to rave about.
But before I could write off Thank You For Today as a “Kintsugi Part Two,” the sixth track, “Autumn Love,” clicks in with a fresh feel, a melodic hook that runs up the musical scale, a tactic familiar from early Beatle songs, and various pop songwriters, but this specific bright musical run recalls a similar trick common to Robert Smith on early albums by The Cure. “Northern Lights,” up next, carries a similar sense of purpose, with another up-tempo beat, solid guitar work, and all the sonic touches that make this the kind of electronic synth pop worth tuning in for. These two songs, together suggest where Death Cab is heading, and give a sense that the future could be bright… but you won’t need sunglasses.
The final three of the album’s ten tracks return to business as usual, at times just going through the motions, but lyrically and sonically it’s more comfortable territory for the long-time Death Cab fan. “You Moved Away” has a curious lyric about a significant other taking their things and leaving, “Near/Far” plays with the image of distance and closeness, and as for the final track, “60 & Punk,” I have to admit it appealed to me primarily as a reflection on someone at my age and with my musical interests. It’s not all that clear, if Gibbard’s saluting a record store mentor, or comparing his place in the music world when he started out at 22, with what he imagines it will feel like in two more decades when all you might have going on is the promise of the next tour: “when you are looking in the mirror do you see the kid you used to be… were you happier when you were poor.”
At some level, it feels like Gibbard & Co.’s found that place where committing to the long haul makes sense, and they can imagine the music that will carry him through the next decade or so, and if there’s more like “Autumn Love” and “Northern Lights” in store, and even a single or two in the “Gold Rush” vein, Death Cab For Cutie will have what it takes to make the journey worth the effort.
Key Tracks: “Autumn Love” / “Northern Lights” / “Gold Rush”
Artists With Similar Fire: The Shins / Nada Surf / Manchester Orchestra
Death Cab For Cutie Website
Death Cab For Cutie Facebook
Atlantic Records
– Reviewed by Brian Q. Newcomb

Cash Rivers And The Sinners: Do Not Try To Adjust Your Set I Am The Horizontal And The Vertical 2 LP (Black Vinyl | Limited)